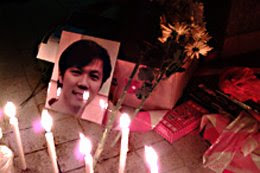 First, the case began with the mere speculation on someone's blog that there were state exco members involved in mis-allocation of funds.

Ean Yong was one of the seven assemblypersons being investigated, and the accusation in his particular case was that he had paid RM2,400 for 1,500 Malaysian flags used in the Merdeka Day celebrations in 2008, without actually receiving them from the suppliers.

The measly amount of RM2,400 surely cannot justify the way in which Teoh was treated, interrogated from 6pm till 3.45am of the following day. Surely corruption cases involving millions of ringgit are more worth the time and effort of MACC, and not petty cases as this.

As such, even by the largest stretch of the imagination, that if this case was indeed one of corruption, it is absolutely clear that MACC was overzealous and making a mountain out of a molehill – which in turn causes minds to question its political neutrality.

If instructions were given to play up this case – and that of other assemblypersons – then the independence of MACC has all but disappeared. This incident is the final nail in its coffin, from the public's point of view. It will be impossible for it to reclaim public trust and confidence from hereon.

Second, the manner of interrogation is also suspicious. Tan Boon Wah, a Kajang local councillor, was questioned in relation to the same case and shared at a press conference that the interrogation involved standing at attention for four hours in a row, without food or water.

Threats were made to beat him up, and mention of his family was made, should he not give the answers they wanted. He was allegedly jeered at, with humiliating calls of 'Cina Bodoh!' shouted at his face, an utter racist remark. This is a far cry from the 1Malaysia concept that Prime Minister Najib Abdul Razak has attempted to introduce.

Ean Yong described Teoh's interrogation by MACC as strange because he was questioned into the wee hours or the morning and denied counsel.

"Even hardened criminals are allowed lawyers during questioning, but not Teoh," he lamented.

He suggested that it was impossible for Teoh to have plunged to his death from any where else other than the Selangor MACC office because electronic access cards were required to operate the doors. He also told the crowd that it was not logical for Teoh, who was to be married on Friday, to stay in the MACC premises after being purportedly released at 3.45am on Thursday. "Will you be so silly to stay back?" asked Ean Yong.

This issue is not and should not be made to be a racial one by any measure. It is an issue of principle and justice, let us take cognizance. Although this is speculation, many wonder if Teoh was subject to similar treatment. a revelation from Raja Petra Kamarudin;

The MACC then leaked information to the media that they are investigating a very senior police officer, the Director of the CCD, for the crime of not declaring RM27 million worth of assets. The fact that MACC investigations come under the Official Secrets Act was not a hindrance. After all, the OSA is only used against opposition supporters and not against those who serve those who walk in the corridors of power.

Nevertheless, the Director of the CCD was finally not charged for not declaring RM27 million in assets. He was charged for using police property for his personal reasons, something that all government officers, ministers and politicians do blatantly every day of the week. But his real crime is that he detained several Chinese underworld bosses who control the prostitution, loan shark, drugs and gambling business all over Malaysia.

Then they arrested the lawyer who acted for the CCD Director. The MACC officers came to his office on the eve of Hari Raya and handcuffed him after roughing him up like one would do to an armed bank robber. To ensure that the lawyer suffered the greatest embarrassment this Hollywood-style arrest was done in full view of the entire office.

Khir Toyo is still not dragged by MACC despite the obvious, probably bukti tak cukup atau these pegawai MACC dah kecut teloq? MACC probably thought the rakyat are idiots to accept their explanation.....

Thats how our police and MACC acts on hearsay,reports on blogs,in news media but not on hard evidences.