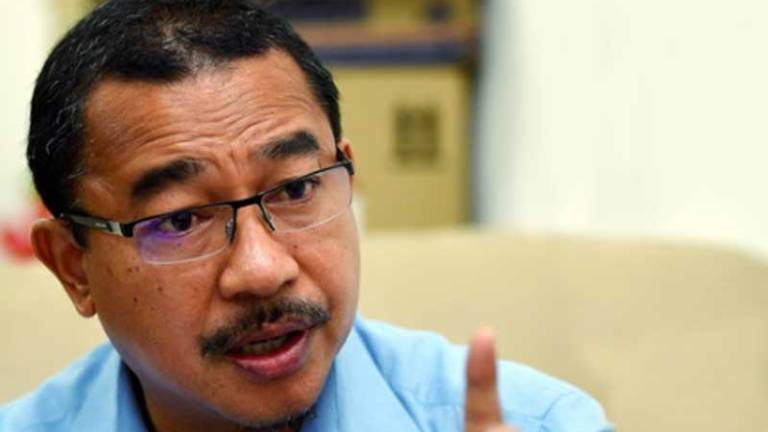 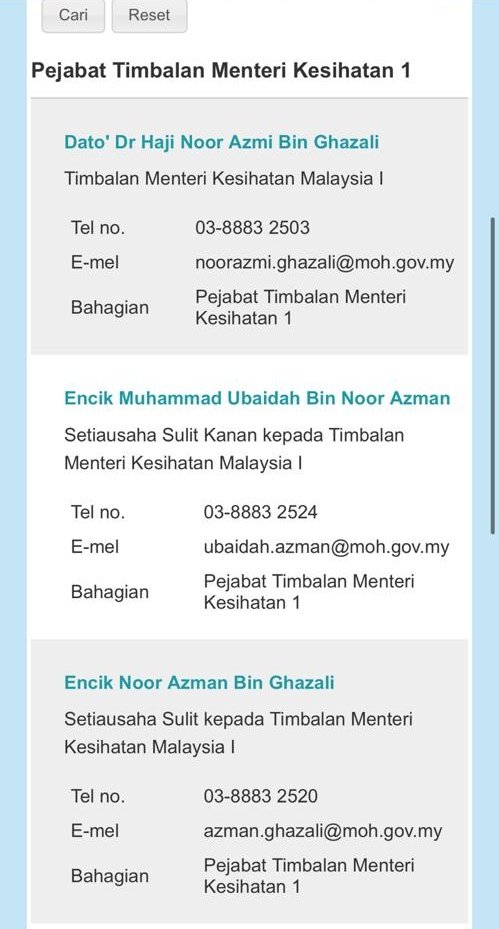 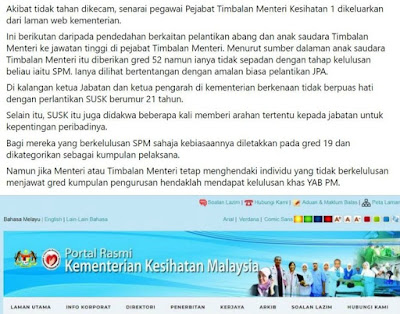 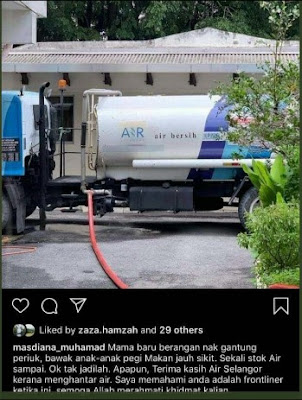 Even as dry taps begin to flow in the Klang Valley, frustrated netizens were not amused upon learning that VIPs were allegedly getting special treatment by having water in tankers delivered directly to their homes.

Among the VIPs were Selangor Menteri Besar Amirudin Shari and his family. There were also allegations that federal ministers were getting the same special deliveries.

Unlike ordinary Selangor residents who were forced to purchase bottled water or wait in line for water, an Instagram posting by Amirudin's wife, Masdiana Muhammad, which had gone viral, showed an Air Selangor tanker parked right in front of their house with a hose entering the driveway.

"I understand you are the frontliner right now, may Allah bless your services," said a part of Masdiana's caption on the photograph.

A separate screenshot from Masdiana's Instagram story posting yesterday also showed her children swimming in their private pool, with the caption: "Bila air takde" (when there is no water).

Netizens who commented on Masdiana's posting, in turn, shared their own photographs of queueing by the roadside to fill up water from public pipes or water tankers. When contacted, Air Selangor confirmed that it had sent a tanker to Amirudin's official residence. 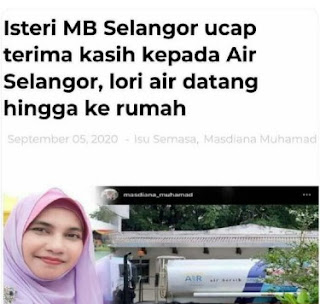 Quizzed whether it was standard practice for Air Selangor to deliver water directly to the menteri besar's house, Elina said: "We don’t just send to the MB’s house. We do our best to send and help all our customers.

"If you noticed in our press release, we even received help from other states because our tankers are not enough to accommodate 1.2 million accounts," she added.

When it was pointed out that the rakyat's unhappiness was due to the alleged double standard by Air Selangor, Elina declined comments and directed further questions to Amirudin's office.

An aide to Amirudin later told Malaysiakini that Masdiana had in a separate Instagram posting today apologised for her initial posts.

"I realise my error in uploading the initial photos that had given rise to various interpretations.

"In fact, there were people saying the tanker was sent to fill up the pool. That is absolutely not true," she said.

"Houses of ministers in Bukit Damansara, I urge to consider requests from other residents there for water tankers.

"Let the tankers move according to the order of the roads there. Wait for your turn," said Yeoh in reference to the area which also covers Prime Minister Muhyiddin Yassin's residence.

The Sungai Selangor Phase 1, Phase 2, Phase 3 and Rantau Panjang water treatment plants had to be closed down on Sept 3 after detecting pollutants in the water.

This is after pollutants were discharged into Sungai Gong that flows into Sungai Sembah which in turn feeds off Sungai Selangor. 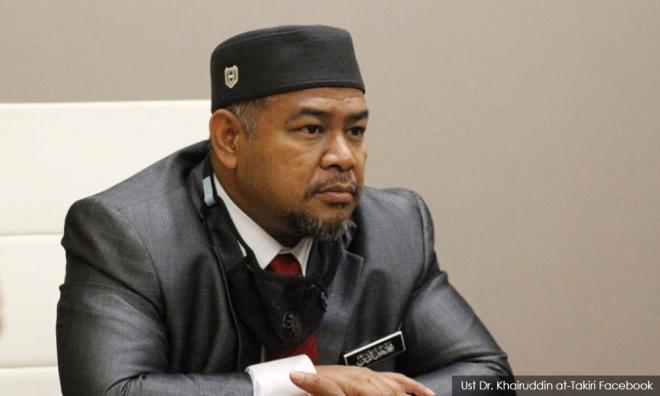 From immorality to hero:
Am I the only one baffled by PAS?...

It is insane to think that a politician can be termed a "hero" when he returns from an overseas jolly with his wife and plays Russian-roulette with other people's lives. That politician is nothing but a selfish and arrogant individual, who thinks that his position in government will protect him.

A hero is someone who dedicates his life to protecting others in an effort to make the world a better place. During this coronavirus pandemic, the true heroes are our frontliners - doctors, nurses, hospital cleaners, the armed forces and policemen.

It is easier to get blood out of a stone than a straight answer from a PAS politician. Do PAS MPs have a problem with reality, with reporters' probing questions, with the rule of law, with the ministerial code of conduct, or with upholding their responsibilities as lawmakers?

The ongoing political drama with Plantation Industries and Commodities Minister Khairuddin Aman Razali (above), who refused to observe the self-quarantine rules on his return from Turkey, cannot be forgotten.

Instead of censuring him, many PAS politicians tripped over themselves, trying to justify their colleague's abuse of power. On Sept 1, PAS president Abdul Hadi Awang skilfully dodged a reporter's question about Khairuddin's transgression, by talking about morals.

Hadi (above) is the last person who should lecture us on morals. He stuck the knife into Dr Wan Azizah Wan Ismail's back when she was nominated by now-dissolved Pakatan Rakyat (PR) to be Selangor Menteri Besar.

Hadi denied having talks about forming a unity government with the felon, Najib Abdul Razak's Umno-Baru, whilst pretending that PAS was a loyal coalition partner in PR.

Khairuddin deliberately put the health and lives of others at risk. He did not act with any morality. Perhaps, PAS or Hadi's definition of morality is far removed from ours. If a DAP politician had failed to observe the quarantine rules, he and his party would have been crucified.

Hadi should come off his moral high ground and realise that anyone who breaks the law, is in breach of the moral code. He said: "If they commit a sin that is contrary with Islam and morals, we will fire them." Isn't breaking the law a sin? As a minister, Khairuddin's conduct reflected badly on PAS.

Politicians who think that politics and morals are mutually exclusive are dangerous people. Remember the former British prime minister, Tony Blair? As a committed and practising Christian, Blair would have believed in the sanctity of life, and yet, he took Britain to war against Iraq, based on a lie. Politics and morals cannot be treated as separate entities. 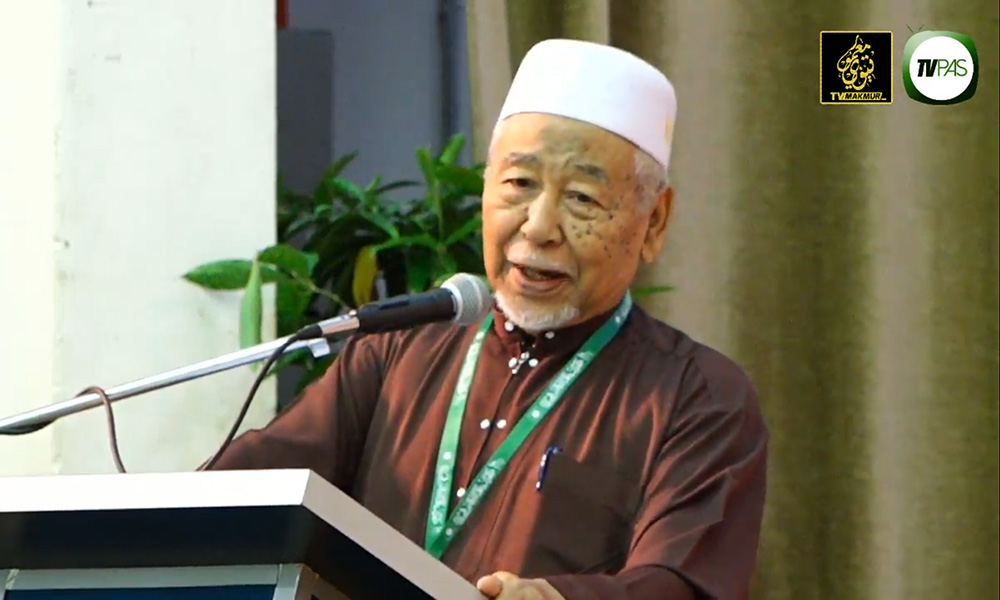 A few days ago, PAS spiritual leader Hashim Jasin (photo) made the bizarre claim that Khairuddin was a "hero". In addition, Hashim shifted the blame onto Health and Foreign ministries for their negligence.

Hashim's definition of a hero is not the same as ours. Someone who failed to self-quarantine, was economical with the truth and risked the health and lives of others, cannot be considered a "hero".

Last week, PAS' vice-president, Tuan Ibrahim Tuan Man's comparison of Khairuddin with lorry drivers and pilots was both demeaning and unfair. It also showed his lack of understanding of those who work for a living. Both professions are excluded from quarantine but must adhere strictly to the rules imposed on them for doing their jobs during the coronavirus pandemic.

The lorry drivers and pilots perform a vital role in keeping the economy and nation running, but if Khairuddin was missing from the government, it is doubtful if anyone would notice or feel his loss.

It is incredible that none of the senior PAS politicians showed good judgment and common sense. Instead of putting themselves in the shoes of the rakyat, they hemmed and hawed, and dug a deeper hole whilst trying to justify Khairuddin's crime. Nothing was mentioned about breaking the law, about the lack of professionalism or Khairuddin's lack of humility.

The Islam that was taught by my parents and elders, is similar to the version learnt by many of my Muslim relatives and friends. Those teachings do not gel with the version of Islam promoted by PAS. 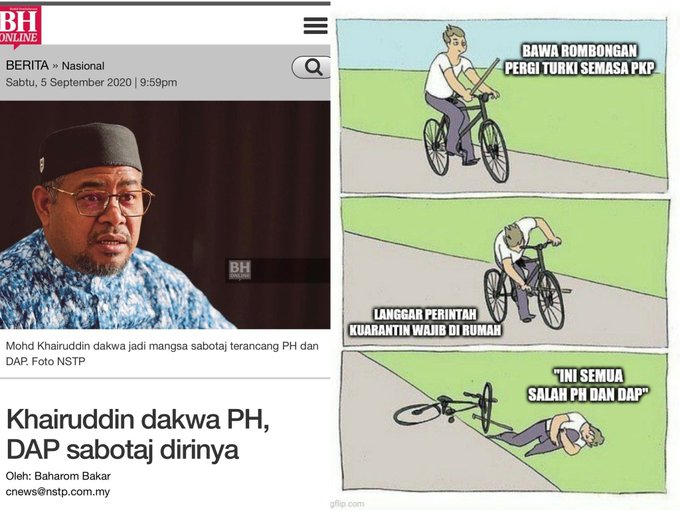 Khairuddin's actions cannot be made halal with terms like "morality" or "heroism". He was also economical with the truth. There is another way of seeing the Khairuddin fiasco.

It is not just the story of a minister who broke the law and thought that he could appease the crowd by paying a fine and making an apology. He was only forced to do these, because of the public outrage.

This is also the story of the silence of the majority of Muslims. The ones who are quietly furious with Khairuddin and PAS' lame excuses but dare not speak out.

Where is the public condemnation of the wannabe clerics masquerading as politicians, who have tarred the religion, and the reputation of the Malays? Where are the learned muftis to denounce Khairuddin's wrongdoing?

For years, PAS claimed they were protectors of Islam and defenders of the Malays. Khairuddin has proven them wrong. - Mariam Mokhtat,mk 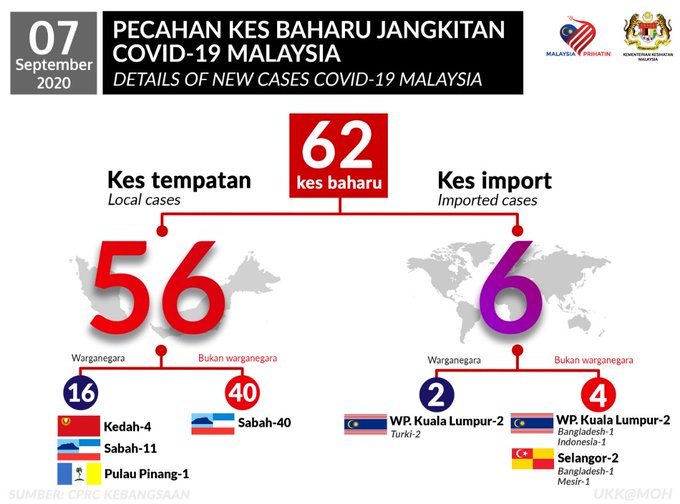 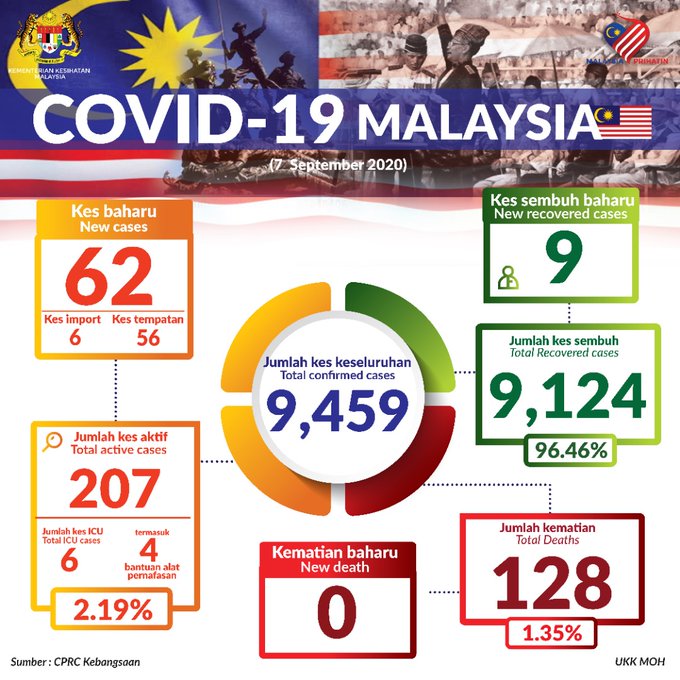