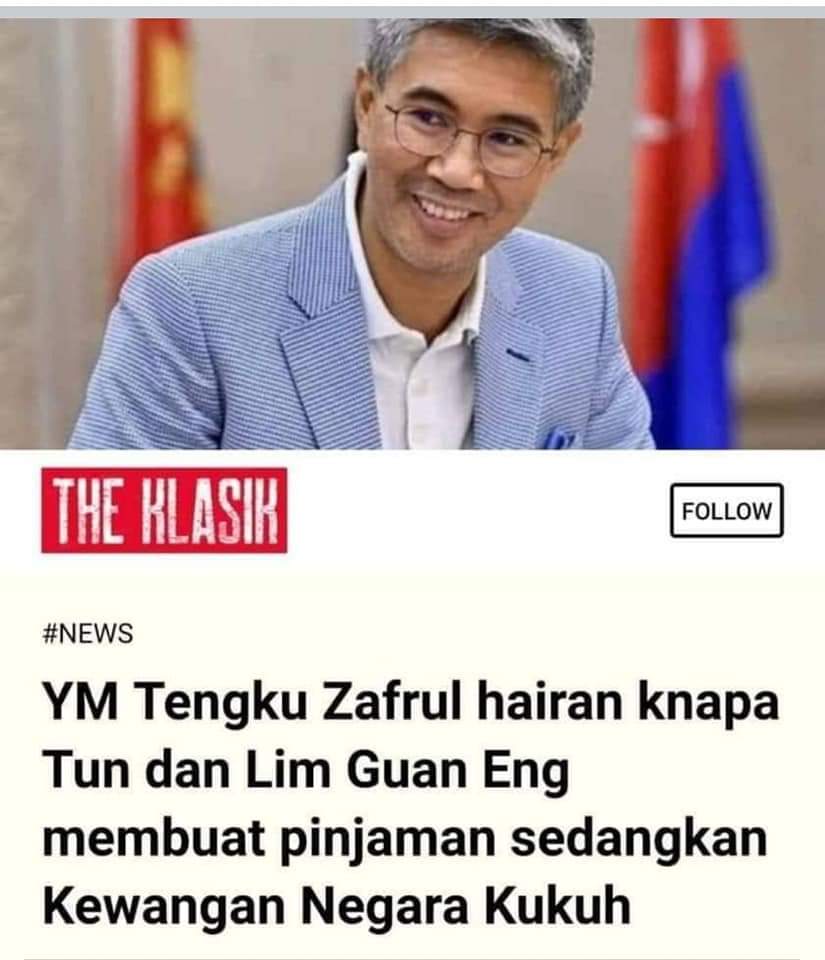 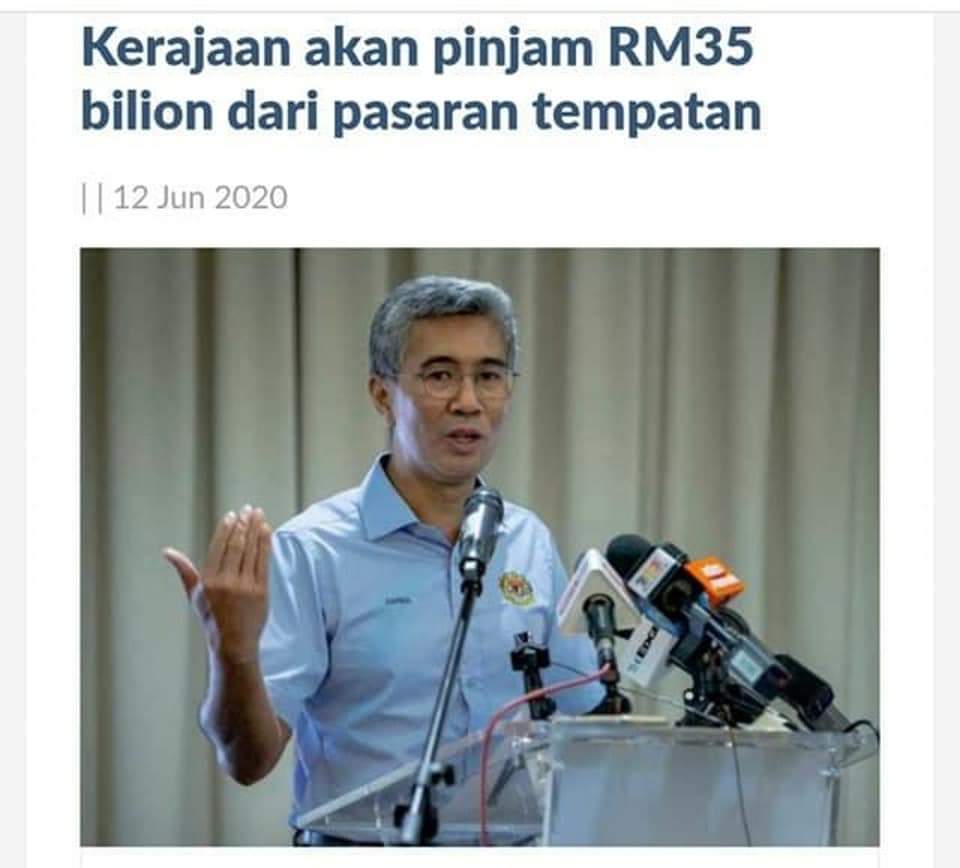 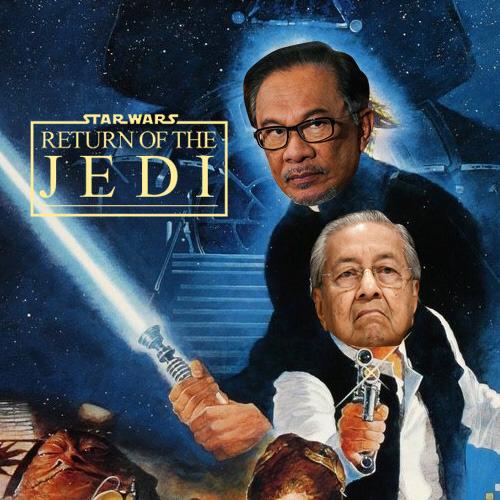 A prime minister for six months?

Anwar Ibrahim is no longer in prison. There is no longer a need to create an unusual arrangement like Pakatan Harapan did before the 14th general election - Dr Mahathir Mohamad to be the seventh prime minister for two years and hand over the baton to Anwar as the eighth prime minister.

The logic at that time was that a loose two-year timeline would ensure that Anwar is out of Sungai Buloh as a prisoner of conscience. In the stalemate on a prime minister candidate for Pakatan Harapan Plus now, it appears that there are a few options forward:

(b) Mahathir as PM for “several months” and Anwar as DPM

(c) Anwar as PM and Mukhriz Mahathir as DPM

(d) Shafie Apdal or a Sarawak-based party leader as PM

Out of these options, (b) appears to be the most likely outcome. Anwar has held out on option (a) because it puts him in a far worse position compared to before the Sheraton Move – at least back then there was a two-year agreement to hand over power to him.

Option (c) is also unlikely since Mahathir would not want to see Anwar as prime minister in his lifetime (deemed as too “liberal” and unsuitable by Mahathir), and Mukhriz’s strength still has some way to go. Option (d) would not receive consensus from most component parties. Therefore, option (b) would be most likely as Harapan would want to seek a reversal to the pre-Sheraton Move status quo.

Harapan generally believes that they are a force of moral good and getting back to power is an urgent necessity. Before Muhyiddin Yassin’s coup, the revised timeline for the handover of the prime ministership was “after the Apec summit” that was scheduled to be held in November this year. 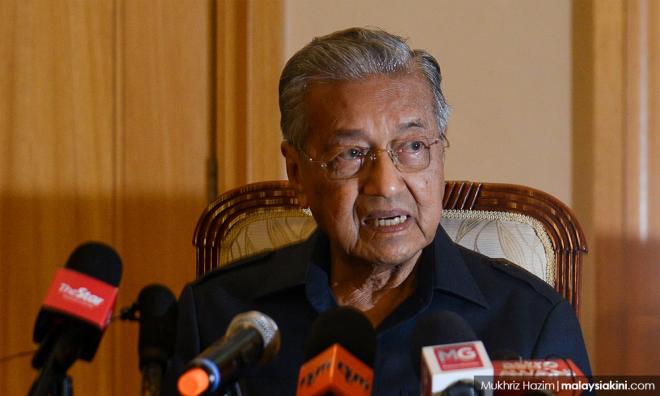 Of course, Harapan Plus will definitely not agree to put this down to paper and would once again impose a loose timeline of “several months roughly after Apec” for a handover to Anwar. What this translates to is a Mahathir prime ministership of six months. This is a hazardous proposition.

One of the common claims against a two-year timeline or any call for Mahathir to hand over to Anwar was that it would destabilise the government. Anwar’s oft-repeated statement was to “give space” to Mahathir to govern since assurance and stability were essential to govern well.

In other words, if it wasn’t for the unusual circumstance of Anwar being in prison before GE14, any imposition of a transition plan with a timeline would not be good for anyone.  What we have learned is that there is no such thing as a peaceful handover of prime ministership as most prime ministers would want to stay on as long as they can.

What has been revealed through the backdoor meetings of Harapan leaders is that leaders aligned to Mahathir had always wanted the nonagenarian to stay on as prime minister – even to the point of reneging on the agreement to hand over power to Anwar.

From the people’s perspective, continually changing the premier is also scarring. Policies change, personnel reshuffle and politics go on overdrive.  Granted, the coup that changed our premier from Mahathir to Muhyiddin was not Harapan’s fault. But inviting and necessitating a transition plan after six months, or worse, “several months”, converts the government into a farce.

Mahathir once told Anwar that setting a timeline to hand over the prime ministership will make him a lame-duck prime minister. I agree.  A prime minister needs the confidence and respect of the cabinet, civil service, and the people.  If the people know that Mahathir will not be a prime minister for long, they will gather around his successor and only treat what he says with a caution of transience.

Therefore, imposing a timeline for a second time is untenable. In fact, on a practical standpoint, no one can get much done in six months. Even an experienced prime minister like Mahathir got little done in the 22 months he served as the seventh prime minister.  He has often lamented that he does not have enough time to make the changes he wants. 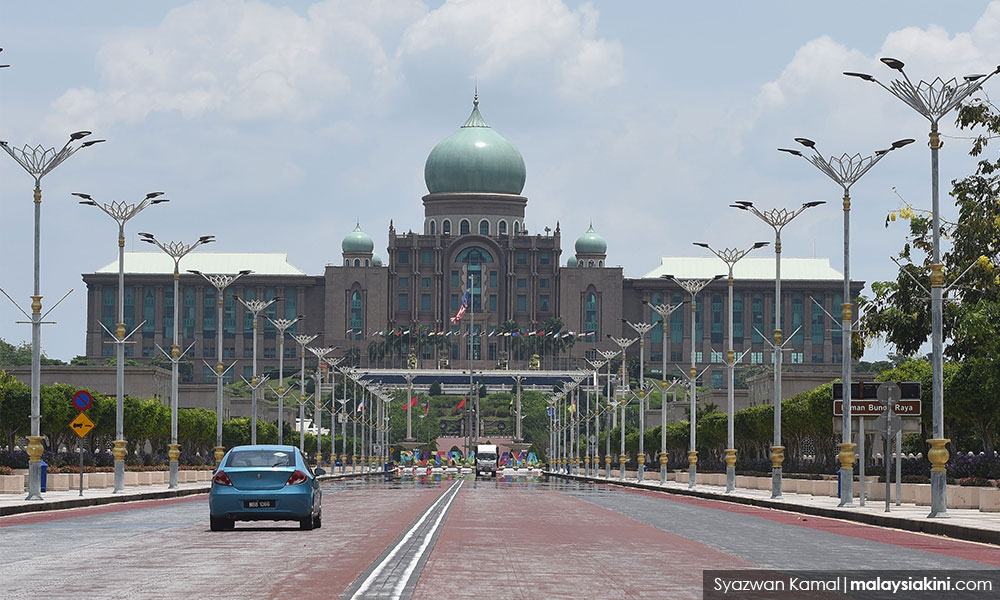 What was destroyed by many governments before will take many years to repair. Mahathir knows this more than anyone else.  Imposing a much shorter timeline now – albeit much looser – will inevitably reduce the prime minister to a lame-duck prime minister.

Those who prefer Mahathir to return as prime minister for the third time often base their claims on two notions. One is that without Mahathir, Harapan would not have won GE14.

Two, the “strong influence” and “miracle” of Mahathir is needed to negotiate the seats that Harapan is short of claiming a majority in Parliament. The first notion has often been repeated but never proven, empirically or otherwise.

The broad idea was Mahathir was the key reason why Harapan won the people’s mandate in GE14 – without any proof of public opinion data compared to other vital reasons such as economic pessimism, the GST, employment, or the cost of living.  It also ignores the fact that Bersatu only won 13 seats and only 25-30 percent of Malays voted for Harapan, casting doubt on Mahathir’s influence.

Bearing this in mind, the question is whether there is any necessity for Mahathir to hold on to several months as prime minister before Harapan Plus can enjoy a breath of fresh air again – when reforms are no longer an impossible dream.

In the absence of a strong moral, procedural or political claim to the prime ministership, there is no reason why our country needs Mahathir to return for the third time. After all, Mahathir only has six MPs on his side – a 2.7 percent legitimacy to stake a claim for equal and overriding partnership. - James Chai 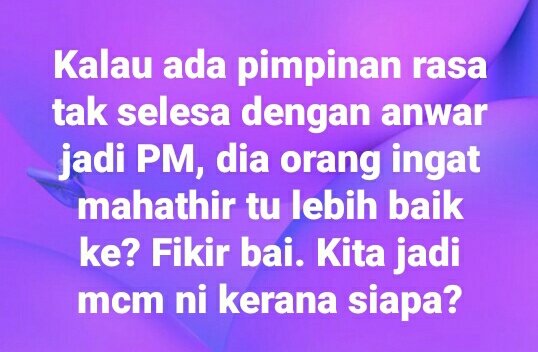 Its really madness ...he resigned n now he wants it bc.....crazy ..Dont think for a second for TunM to be in the equation for pm again......may be he still want to put you back again at Sg Buloh... if you gv him the 3rd chance...rakyat will not forgive you for this mistake....no more SABAR PERENGKAT DEWA.....time to teach TunM some lessons n rakyat love to see that happen.....PH lost because of him n this need to be remembered.." 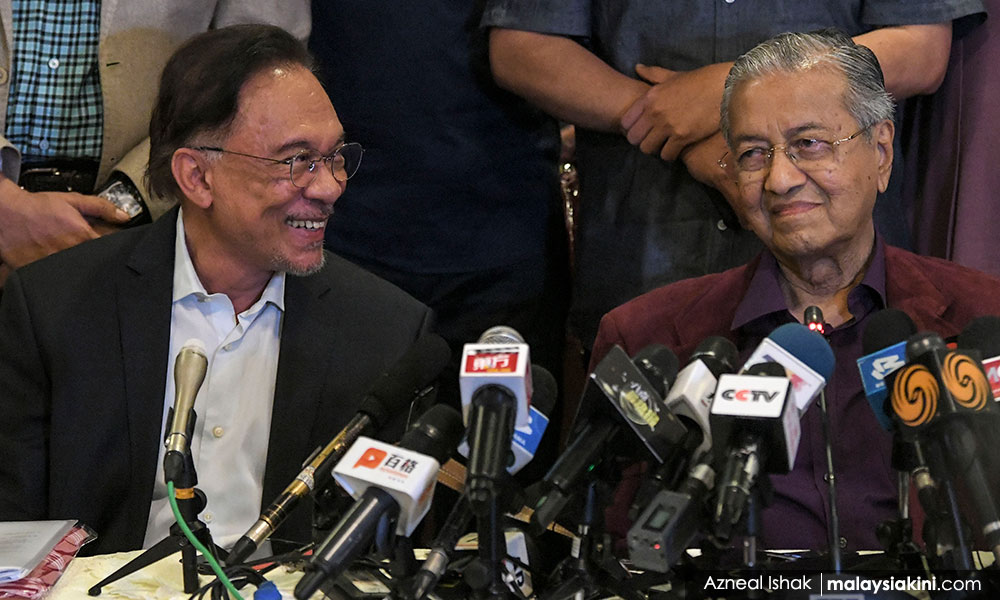 I can see clearly now - Anwar
is Harapan’s PM candidate...

I can see clearly now that the "rain" is gone – all the obstacles (read traitors and turncoats) inside the Harapan coalition we voted into power in GE14 are now gone - and for the better. I can see clearly now that the Perikatan Nasional (PN) administration of Muhyiddin Yassin is shaky as his "backdoor government" clearly lacks the support of the majority of Malaysians. Its legitimacy is also seriously in doubt.

Even Muhyiddin can see that clearly himself as he is now considering the option of calling for fresh elections by year-end, as reported. I can also see clearly now that PKR president Anwar Ibrahim is the new chairperson of the Pakatan Harapan Plus coalition and that it is very clear to me that he should be the prime minister candidate of the opposition group.

Unfortunately, there is another contender to be PM – Dr Mahathir Mohamad. This is where the dynamics in Harapan turns delicate and tricky. It is also clear to many of us that Mahathir is now planning a counter-coup with his Harapan Plus allies. To those supporting such a move, they are probably saddened that the choice of the PM candidate remains the sore point.

Early this week, Mahathir made a rare appearance (below) at the PKR headquarters in Petaling Jaya to attend a Harapan meeting chaired by Anwar. Also present was Parti Warisan president Shafie Apdal who was on the PKR premises for the first time.

All later emerged from the meeting declaring that there would be “positive news” from the coalition within a week.  It soon became clear that the meeting has yet to decide on the PM candidate – the issue continues to stick out like a sore thumb.

Last Friday, PKR, DAP and Amanah leaders met again – this time without Mahathir and Shafie.  We can guess the meeting’s top agenda after a Harapan announcement that their PM candidate will be revealed coming Tuesday.

There is something which I cannot see clearly – why is Mahathir still keen on becoming prime minister for the third time? I keep asking myself whether I am blind or is it Mahathir who is blind. I find it difficult to comprehend why a man of 95 is still interested to be the nation’s chief executive, a position he had held for 22 years and 22 months over two different periods of his long life. 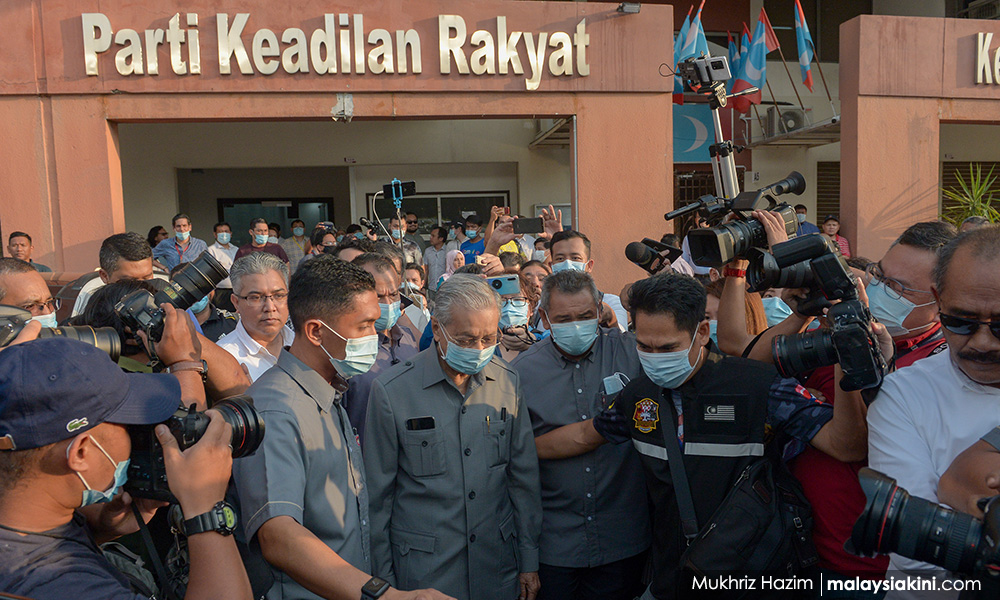 And if I have heard correctly, Mahathir only wants to be prime minister for six months after which he would pass the baton to Anwar. Perhaps there is something Mahathir can clearly see ahead of him which you and I cannot.  However, I am still uncertain whether I should trust Mahathir’s instincts again and give him the benefit of the doubt after what had happened over the past two years.

What I cannot see, ahead of Mahathir’s moves, has put me in a dilemma. Somehow, the trust and confidence I had in Mahathir prior to GE14 are sadly lacking this time. Let me be honest and relate this little tale. In April, a Harapan leader, a dear friend, asked me what I thought of the Mahathir-Anwar joint statement where the duo have agreed to set aside their differences and work together again to wrest power from the backdoor government of Muhyiddin.

My initial reaction was sheer disbelief: “Seriously? Mahathir and Anwar together – surely, not again. What a dumb move!” With due respect, after what happened in February, I had had enough of the Mahathir-Anwar combo. I wanted Harapan to move on and start afresh.

I no longer have faith in the hopeless Harapan that was hopeless in handling power, leaving Malaysians hopelessly in a limbo. We need leaders who know what they are doing to inspire and bring hope and positive changes to the nation.  Malaysians need role models around them. Leaders must provide clear directions on how to move the nation forward.

My dream for Malaysia is a fresh start with 222 new members of Parliament. No more Harapan, Harapan Plus or PN. Enough of the same breed of politicians. Since that is not likely to happen, I am stuck with what is on display before me and will make the most of it. In Pakatan Harapan Plus, Anwar should be the PM candidate just as he has rightly been chosen to be the opposition leader.

In a recent interview with Malaysiakini, Anwar conceded that some Harapan lawmakers have pragmatic views and want Mahathir to be the premier candidate in order to secure the numbers needed to gain a majority in Parliament. But realpolitik or not, Anwar, the decision is not yours alone to make. It is also not for the 20-odd people on the Harapan presidential council to make. Ultimately, the position of Malaysians matters.

On this issue of the PM candidate, there is only one name for now. He should be Anwar Ibrahim, love him or loathe him. That, I can see clearly now. - Francis Paul Siah 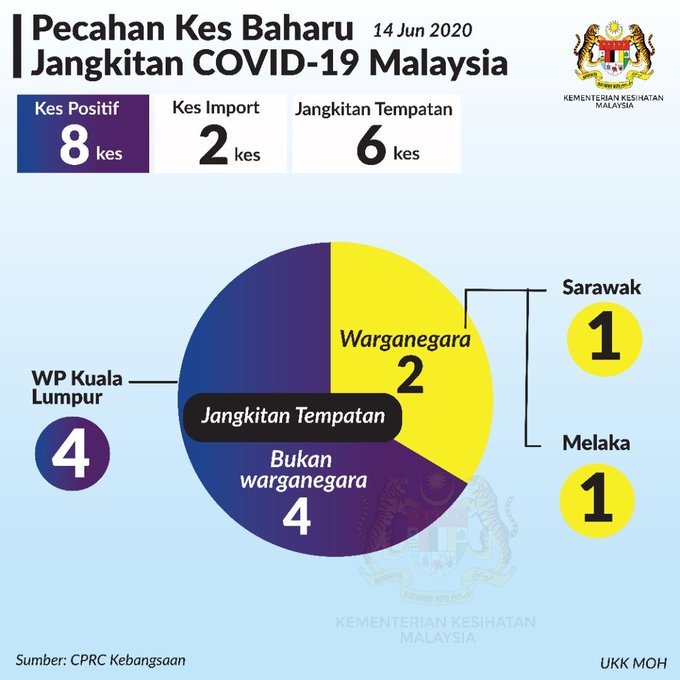 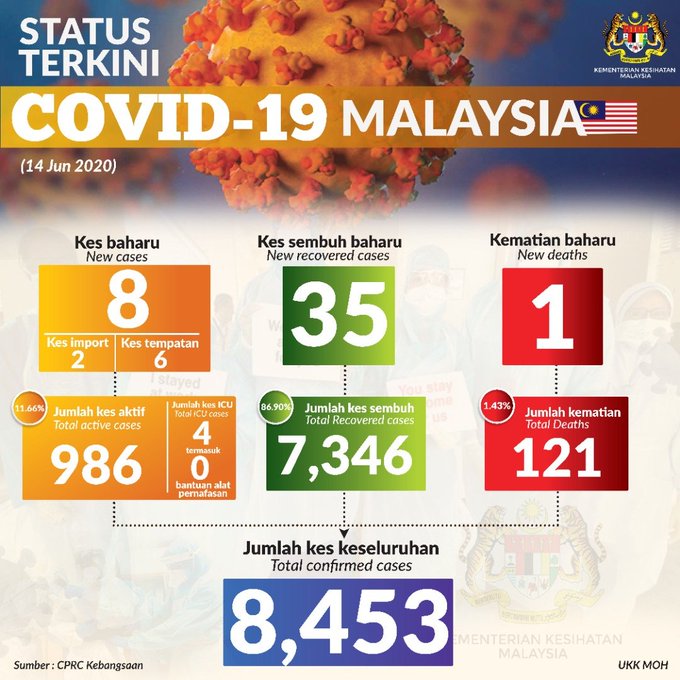