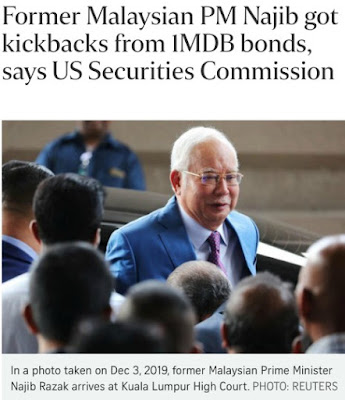 For as long as one can remember, Najib Razak has denied any involvement in the 1MDB scandal, despite caught with his hand in the cookie jar – a jaw-dropping  US$681 million in his private bank accounts. Instead, he claimed that the huge sum of money was donations from Saudi royal family, a claim that could not be officially and fully substantiated.

Najib, former prime minister of Malaysia and chairman of 1MDB (1Malaysia Development Berhad), had been consistent with his claim – until he was grilled by Al-Jazeera journalist Mary Ann Jolley last year. Finally, he wasn’t so sure anymore. He said he actually “assumed” the funds came from the Saudi government, claiming the dead King Abdullah had promised to give him money.

But in September 2018, Najib released documents which he claimed are proof that the Saudi Arabian royalty had indeed donated to him. He proudly uploaded to his Facebook page the document of a donation totalling US$100 million. Najib also unleashed a letter supposedly written by Saudi Prince Abdul Aziz Al-Saud dated February 1, 2011.

Subsequently, another letter dated March 1, 2013, was issued to Najib – gifting him with another US$800 million. Both letters, hilariously, carried different signatures, despite claiming to be from the same Saudi prince. The biggest joke was some of the contents of the letters were similar to a letter written by Eric Tan Kim Loong to Jho Low (both individuals believed to be the same person).

Like a storyline in a video game, the letter said – “In view of the friendship that we have developed over the years and your new ideas as a modern Islamic leader, I hereby grant you a sum of United States Dollars One Hundred Million (USD100,000,000) Only (“Gift”) which shall be remitted to you at such times and in such manner as I deem fit.”

Besides, the contents of the letter appeared to be an afterthought ploy and probably were composed by Jho Low (full name: Low Taek Jho), the partner-in-crime of Najib Razak. The letter was begging the readers to believe that the money was donations. Exactly why was the letter addressed to Najib’s residence in Jalan Langgak Duta, and not the Prime Minister Office, is beyond comprehension.

Amusingly, Najib’s hotshot lawyer – Shafee Abdullah – didn’t think it’s important to produce Saudi Prince Abdul Aziz Al-Saud as material witness in the ongoing 1MDB corruption trials against his client. Did not the letter from Saudi praise Najib’s contribution to the Islamic world, hence the donations without any strings attached? Why did the Arab royal house refuse to save a good Muslim like Najib now?

That’s because Saudi had never paid a penny to Najib Razak, despite what the disputable (and probably fake) letter says about the free cash for the disgraced premier. Only the fools would believe that the late King Abdullah was damn worried about Arab Spring in Malaysia, a country which is 6,461-km away, and had sought to pay Najib regime a large sum of money to preserve stability.

While Najib and his lawyers could not produce complete documents to verify the US$681 million donations, let alone Arab witnesses to support his fairy tale, the United States is able to do so. According to latest documents released by the US Securities and Exchange Commission (SEC), Najib Razak has been identified as the person who had received kickbacks from bonds issued by 1MDB.

The documents released were in relation to SEC’s settlement with former Goldman Sachs Group Inc executive Tim Leissner. In detailing the background of the case, the SEC said that Leissner had helped to raise US$6.5 billion (RM26.9 billion) for 1MDB under the guise of supporting projects meant to benefit Malaysians. But the money raised didn’t go to the people of Malaysia.

The commission said – “Leissner and others instead planned and executed a scheme to misappropriate more than US$2.7 billion and distribute the money as bribes and kickbacks to government officials in Malaysia and Abu Dhabi. Including but not limited to Najib as well as to other participants in the scheme and their families, including Leissner.”

After the stunning defeat of Mr. Najib in the historical May 2018 General Election, apparently the panicked Leissner hurriedly sought negotiations with U.S. prosecutors to potentially plead guilty to criminal charges, especially to a violation of the U.S. Foreign Corrupt Practices Act, which prohibits the use of bribes to foreign officials to get or keep business.

On Nov 1, 2018, the United States revealed criminal charges against not only Tim Leissner but also another Goldman Sachs banker, Ng Choon Hwa (Roger Ng), together with Malaysian financier fugitive Jho Low. Roger Ng was arrested in Malaysia while his former colleague Tim Leissner pleaded guilty to conspiring to launder money and to violating anti-bribery laws.

Tim Leissner agreed to pay US$43.7 million (£33.6 million; RM182 million). It was a good deal considering he had admitted to enriching himself – acknowledging that more than US$200 million in proceeds from 1MDB bonds flowed into accounts controlled by him and a relative in Hong Kong. This sweet deal means that Leissner had agreed to turn witness in the explosive scandal.

After he pleaded guilty to helping orchestrate the looting of billions of dollars from Malaysia’s sovereign wealth fund 1MDB, Leissner, who is married to model and fashion designer Kimora Lee Simmons, has also been banned for life from working in the securities industry by the U.S. regulators. Still, Leissner is scheduled to face sentencing on June 11 in a federal court in Brooklyn, New York.

Months ago, the U.S. prosecutors revealed that the three bond sales for 1MDB, code-named Project Magnolia, Maximus and Catalyze, had resulted in more than US$2.7 billion of the US$6.5 billion raised diverted into accounts controlled by Jho Low, Tim Leissner and other crooks. Money stolen was used to pay bribes to government officials, including the purchase of jewellery for Najib’s wife Rosmah Mansor.

Now, the U.S. Securities Commission agreed with the U.S. prosecutors, saying – “Leissner also knew at the time that Najib Razak and government officials from Abu Dhabi and 1MDB officials would receive money from the proceeds of Project Maximus that passed through various shell companies beneficially owned and controlled by himself, Low and others.”

Under “Project Maximus”, the second of two bonds issued by 1MDB in 2012, which is called the Aabar BVI phase, Najib received US$30 million. But the juiciest kickbacks came from the “Project Catalyze”, which is also known as the Tanore phase in 2013 where the despicable former prime minster received a further US$681 million misappropriated from 1MDB.

It was also during the “Project Catalyze” that kickbacks, including “transferring approximately US$1.3 million (RM5.38 million) to the account of a New York jeweller to pay for jewellery for the wife of Najib” happened. This is in reference to 27 different 18-carat gold necklaces and bracelets Jho Low had bought for Rosmah Mansor from the 1MDB money siphoned.

Najib loves to drum the fact that US$620 million (out of the US$681 million) of the so-called donation money had been returned in August 2013. What he refuses to tell his dumb supporters is what actually happened to that money thereafter. Nope, the money didn’t go back to the Saudi royal house’s account, but stayed in the Tanore Finance Corp account in Singapore.

In fact, a month after the US$620 million was returned to the Tanore, the money was used to purchase a 22-K pink diamond necklace worth a staggering US$27.3 million for Rosmah, after US$32.76 million was transferred from Midhurst to a DBS Singapore bank account for Blackrock, one of many accounts held nominally by fugitive Jho Low under the alias of Eric Tan.

Yes, Najib’s wife Rosmah Mansor had earlier been exposed to have had purchased a 22-carat pink diamond necklace – worth a stunning US$27.3 million – using money siphoned from 1MDB. According to U.S.-DOJ investigations, Jho Low had arranged for jewellery designer Lorraine Schwartz (also known as “Jewish Queen of Oscar Bling”) for the pink diamond on June 2, 2013.

Now that the U.S. Securities Commission has established that the US$681 million (RM2.6 billion) discovered in Najib Razak’s bank accounts were kickbacks from 1MDB bond deals, it proves that the much hyped Saudi donations did not exist at all. From the beginning, the U.S. Department of Justice and FBI had found no evidence of donations from Saudi in their investigations.

Despite Najib’s attempt of claiming ignorance in his current corruption and money laundering trials, the U.S. SEC has pointed out that upon 1MDB’s formation, Najib assumed a position of authority in 1MDB, and had the authority to approve all appointments and removals in 1MDB’s board of directors and 1MDB’s senior management team. He knew what he was doing until he is put on trial.


To make matters worse for the crooked Najib, Saudi Arabian Foreign Minister Adel Ahmed Al-Jubeir confirmed in October last year that the RM2.6 billion “donation” which former prime minister Najib Razak proudly claimed to have received had nothing to do with the kingdom’s government. Mr. Najib is really screwed. He has not a single material witness to back his story. - FT 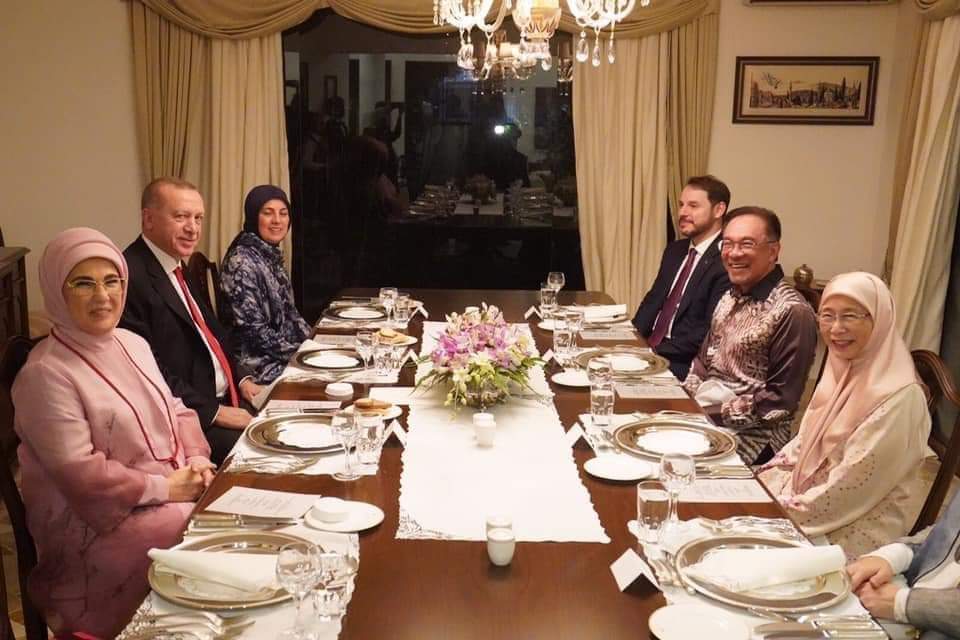