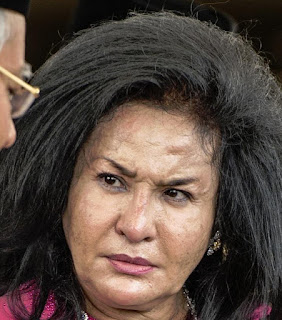 Ib - He did not get a call from Trump. He got a message saying if you wish you can call me at 4.30 am. So much for respect and human touch. If the man has any respect for a fellow country head he would not treat others like that getting people up at 2.30 and saying call me at 4.30. Total disrespect!

Gerard Lourdesamy - These sort of calls are customary when a new leader is elected. It is part and parcel of diplomatic courtesies and are not to be taken as a policy change. The US values its relations with Malaysia and it helps that president elect Trump knows Najib to a certain degree. The invitation to lunch or dinner is extended as part of the legendary American hospitality and friendliness to leaders of countries perceived to be close to the US and also out of politeness. What it does not mean is that the DOJ is going to withdraw and close its kleptocracy investigation and prosecution in the US. That is a matter for the new AG to decide in consultation with the FBI. The president elect cannot interfere in a criminal investigation or judicial proceeding in the US. And after Trump gets his briefing from the DOJ, the FBI and the State Department, he is going to keep a distance from this issue. Trump won the election on a reformist and anti-corruption agenda, Najib is neither.

Anonymous_40f4 - The BN/UMNO BARU propaganda media was all attacking Trump and supporting Crooked Hillary. Najib,Rosmah,UMNO BARU/BN were all hoping n praying for crooked hillary to win.Now since to their great dissapointment Trump won n now they go all out looking to suck-up Trump.Dont they have any shame?But to Najib's dissapointment,Trump is going to clean-up the swamp in Putrajaya n MO1 may be issued a interpol warrant of arrest.

Yesterday....at the Dewan Tun Ismail, PWTC....the Flying Hippo spent over 7 minutes talking about Trump calling Najib. If you have the patience and got nothing better to do, click the above video and hear her rambling on and on and on about what happened.

On the 19th Novermber  - ten days before  - USA Today listed out the names of world leaders that President Elect Donald Trump had called :

Which foreign leaders has Donald Trump spoken to so far?

Thirty Five world leaders that Trump had called. No... Najib Razak, No... Malaysia!

So in terms of importance I think Najib (and Malaysia) ranks below Turkey, Iraq, Azerbaijan and many many other countries.

By the time that Trump did call Najib he must have made what Rosmah herself said was a "short call".

And for those who do talk to Trump...what do they talk about?

Lee Hsien Loong ✔ @leehsienloong
Congratulations to President-Elect Donald Trump. SG will strive to keep working together with US.
7:02 PM - 9 Nov 2016

And what was Rosmah gloating on about?

And if you do bring your family to Washington...don't forget to bring that son of yours that also who went to China with you...you knowlah which one.......nudge nudge wink wink....the one that the US DOJ wants to talk to ! - steadyaku47 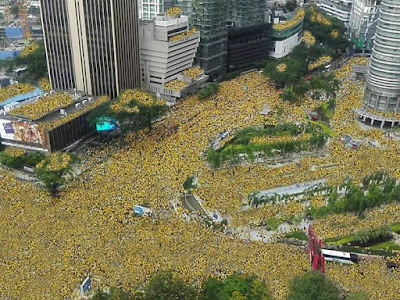 But the opposition has to do more
to win over rural Malays...

Fourty thousand people wearing yellow shirts gathered in Malaysia’s capital on November 19th, to protest against corruption and impunity in government. The rally was orderly and restrained; the response of the authorities was not. On the eve of the protest, police arrested Maria Chin Abdullah, leader of a coalition of human-rights groups that organised the event. She was placed in solitary confinement, and can be held there for 28 days. Even by Malaysia’s dismal recent standards this marked a fresh low. Ordinary Malaysians should not stand by while their leaders undermine the rule of law so casually.

Ms Chin Abdullah’s detention was justified by an anti-terrorism law which the government had promised would never be used against political opponents. The true motivation was to stifle outrage over 1MDB, a state-owned investment firm from which billions have gone missing. In July American government investigators said they thought that $3.5bn had been taken from the firm and that hundreds of millions of dollars went to the prime minister, Najib Razak (who says he has never taken public funds for personal gain). The investigators’ findings corroborated exposés written by local and foreign journalists, who have been unravelling the saga for several years.

Elsewhere the scandal would have sparked a swift change in government. But the United Malays National Organisation (UMNO) has held power for six decades and enjoys broad support from Malaysia’s ethnic-Malay majority, some of whom resent their ethnic-Chinese and Indian compatriots. The party has devised many ways to protect its leaders from internal revolts, so Mr Najib found it easy to purge critics, delay a parliamentary investigation and replace an attorney-general said to have been preparing charges against him.

No one in Malaysia has been charged over 1MDB’s missing money. But a court has handed a prison sentence to an opposition politician who frustrated efforts to hush up the affair. The editor and publisher of one of Malaysia’s last independent news organisations face jail under a rule which forbids certain content published with “intent to annoy”. A competitor closed in March after authorities ordered its website blocked.

Mr Najib’s party is carelessly widening Malaysia’s ethnic and religious splits. Seeking to bolster support among conservative Malay Muslims, it is toying with a proposal to intensify the whippings which may be meted out by sharia courts. It has failed properly to condemn pro-government gangs that last year menacingly gathered in a Chinese part of the capital. Their leaders paint ethnic Malays as victims of sinister conspiracies—dangerous rumour-mongering in a country where politics is still defined by the racial violence of the 1960s.

Until now foreign investors have been fairly sanguine about the economy. But they are growing rattled. The ringgit has depreciated faster than other emerging-market currencies (see article). Last week the authorities asked foreign banks to stop some ringgit trading abroad, raising fears of harsher controls.

Rural ethnic Malays, a crucial constituency, feel that the scandal is a remote affair. Even some educated urbanites still favour Mr Najib’s government over the opposition, underestimating the damage being done by the scandal. If change is to come, the disparate opposition needs to do a better job of winning such people over; its fractious parties must overcome their divisions and present a plausible candidate to replace Mr Najib in a general election that could be held as soon as next year. Malaysia has always been an imperfect democracy, but the rot eating at its institutions is harming its international standing and its economic prospects alike. - the Economist