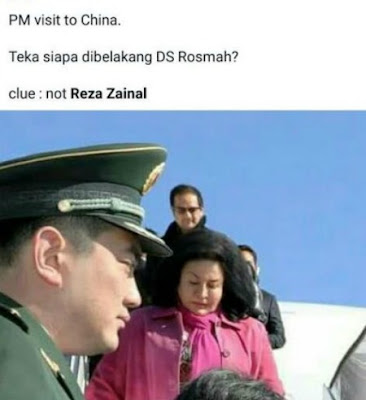 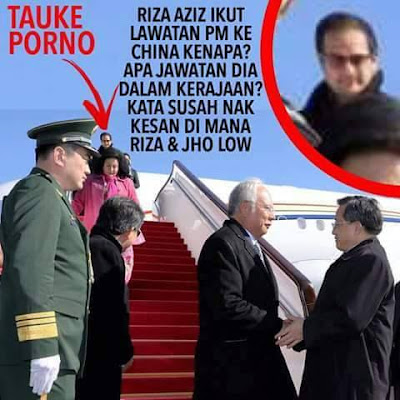 Malaysia's opposition and Twitterati have lashed Prime Minister Najib Razak after images showed he was accompanied on an official trip to China by his stepson, who US authorities have fingered in a massive embezzlement scam.

In images on Twitter, Riza Aziz is seen emerging along with Najib from his delegation's official plane after it arrived in Beijing on Monday.

The US Justice Department said in lawsuits filed in July that more than $200 million was funnelled to Riza from a state investment fund that Najib founded called 1MDB.

1MDB is now the subject of investigations in several countries across the globe amid allegations that Najib, his relatives, and associates plundered billions from it.

The diverted funds were used specifically to bankroll the Hollywood film "The Wolf of Wall Street," directed by Martin Scorsese and starring Leonardo DiCaprio.

"Not only do we have to bear (the cost) of the expensive jet, but now he (Najib) is bringing his stepson, whom the whole world is looking for in relation to 1MDB monies," opposition lawmaker Rafizi Ramli was quoted as saying in parliament.

"Riza shouldn't be given special treatment using the people's funds. He should be arrested and questioned."

"FBI, hurry! Go capture him!" said one posting in the Malay language.

Another read: "Scandalous and outrageous. Aren't the Najibs ashamed of themselves?"

The Justice Department filings repeatedly mentioned a "Malaysian Official 1" as taking part in the 1MDB looting. Malaysia has since admitted that official was Najib, while stressing that he was not a target in the US legal action.-AFP 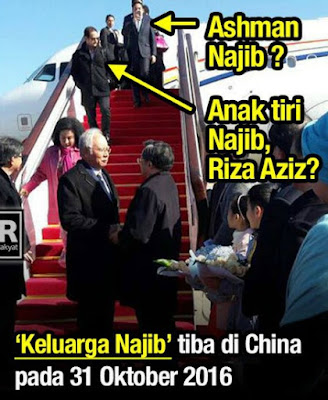 "The only reason the children of Prime Minister Najib Razak and his wife Rosmah Mansor went together to China, was because the Chinese government had invited the entire family for the official trip..... those familiar with Chinese culture would know that this is a standard custom of China's top leaders who emphasize on strong personal and family relationships with their close counterparts".

Let me ask Najib this : When your father went to China in 1974 to meet with Chou En Lia...did he take your mother along? No he did not!

And when you made you first trip to China as PM in 2014 ...why did you only  bring  Rosmah along and not your entire family?

Or was it not the custom of the Chinese government to invite your "entire family" to come along with you at that time?

If not......then when did this Chinese custom of inviting the "entire family" to come along on an official visit started? Last week?

1.Najib's children by his first wife?
2.Does it include all of Rosmah's children by as many husbands as she has had (I am not to clear as to how many husband she had had. Let us just say that it is more than one).
3.Does it also include the children that Najib and Rosmah had together?
4.Does it include any children Najib or Roamah may have had with other partners whether they were married or not?
5.If "all of the above" constitutes Najib's "entire family" that the Chinese had invited ..then between Najib and Rosmah they must have a hell of a lot of "entire family!"

Now Rizal please do let us know how many of Najib and Rosmah's "entire family" followed them on this trip to China and how many did not?

If the Chinese Government have invited the entire family for the "official trip" because it is their custom to do so...why can't Najib tell the Chinese government that it is not the Malaysian custom to take their "entire family" on official visits!

And since the Chinese custom also include eating pork...how? Will Najib and his entire family eat pork in order to follow the custom of the Chinese?

I believe it is also not a Chinese custom to bersunat....how can Najib and the other Malays following Najib to China "unsunat" themselves in order not to upset the Chinese custom? What stupidity is all this ma?
Tolong pakai otak sikit lah...don't just do whatever other people or other government wants you to do.....even if you want to go and sign over 30 MOU's  with them and you expect billions to be poured into Malaysia by the Chinese government to finance that rail project.

Do not think you can get some donations along the way....the Chinese shot corrupt government officials ma!  - steadyaku47 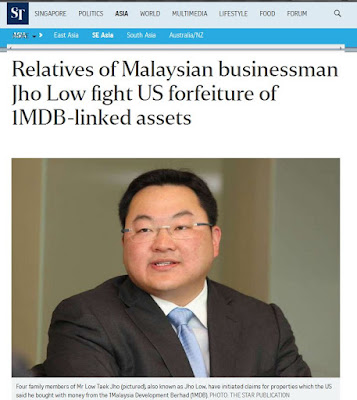 Relatives of JoLo fighting attempts to seize assets acquired with stolen funds accused by US of central role in siphoning  US$3.5 billion (RM14 billion) from 1MDB

Ostb says - Lets get this straight. This Jho Low guy stole more than US$3.5 BILLION 1MDB money.  Part of which he used to buy US$330 million of the above listed assets.

He appointed a Swiss  company (no less than another Rothschilds company) to be his trustee over these assets.

And his Rothschilds Swiss trustees also do not want to have anything to do with the US DOJ for fear that they too will be criminally involved.

So instead Jho Low has got his brother and father to fight the US DOJ - to claim assets that the DOJ says were stolen from us - the Malaysian people.

Berani depa.  No shame.  No morals. 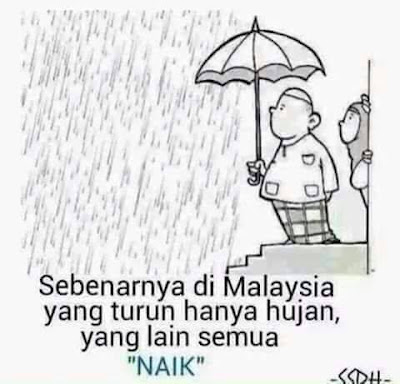