'We know why Raja Nong Chik is chickening out'

I was absent in order to go undercover. I had to check this rumour that is swirling in the grapevine surrounding the impending collapse of Barisan Nasional in Johor. After much research, we can now break this story that will surely cause a major political earthquake in the bloggersphere.

On the morning of the 9th of March 2008, I so happened to be in Johor, travelling from Mersing and heading back immediately to Kuala Lumpur. That was the day Malaysians woke up to the aftermath of the political tsunami that swept through the West Coast of Peninsular Malaysia, claiming the lives of 5 states, 1 Federal Territory and 82 parliamentary seats. However, the Tsunami could not cross the fabled "Gemas line" that divides the "better stock" Johoreans from the inferior cousins.

Even though there were some minor tremors, BN in Johor was left largely intact, holding on to 50 out of the 56 state seats and 25 out of the 26 seats. At the UMNO Headquarters, some people breathed a sigh of relief that fortress Johor had not been breached. They concluded that in Johor, UMNO could still afford to put a rock or a signpost as a candidate and be assured of victory.

But in politics, misplace conceit can invite disaster. And this was what has happened in Johor ever since 2008. 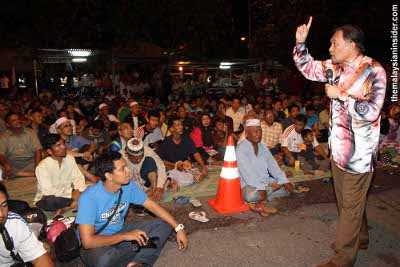 The first rumblings of discontent was heard in 2011 with the emergence of Lim Kang Hoo as the prime wheeler dealer in Johor. Local UMNO warlords were aghast as this guy began to clean up the most lucrative deals leaving them with nothing. At the same time, emerged the fiasco surrounding Johor Corp which was orchestrated by the infamous Level 4 boys.  Furthermore, there was increased interference in Johor by other federal bodies under the control of well known Level 4 operatives through Khazanah and Petronas.

Ghani, never known to be a strong leader in the mould of people like Dato Seri Idris Jusoh played along. He could not care less that the local warlords were getting angry and being cut out of the most lucrative land deals and other important contracts. After all, Ghani believed he could just go to one of Lim Kang Hoo's construction sites, collect some rubble and have the bricks, cement bags and debris stand as candidates in the next General Election.

After all this is Johor and Ghani did not want to make enemies with the new "royal order".

The rumours of discontent were indeed verified when several senior UMNO bloggers, acting on the instructions of the inner circle of Dr Mahathir himself attempted to inject themselves into Johor politics by posting extremely seditious articles that highlighted this development. But for all the hoohaa, it just took one royal tête-à-tête and the issue was totally silenced from the blogs.

TSMY then decided to act. He made it clear at internal meetings that Ghani had to go and in his place, TSMY nominated Khalid Nordin. But Ghani had learnt to play this game well. At first he used some bloggers to spin a story that "he had enough and wanted to retire" whilst all he wanted to do was to negotiate for  power. But when the ruse failed and Khalid Nordin was adamant that Ghani be dispatched  prior to the GE, he then opted to sabotage Khalid.

That is why there is this big land issue in Pasir Gudang, which is Khalid Nordin's area. Ghani was not going to roll over and let Khalid Nordin install himself as King without making it as difficult as possible. Hence he orchestrated the crisis surrounding UMNO in Pasir Gudang whereby UMNO campaign rooms are being abandoned. Khalid cried for help to his mentor TSMY, but TSMY has his hands full trying to finish off Najib. The last thing that he could do was to be seen to fight Ghani in Johor, which was his state.. 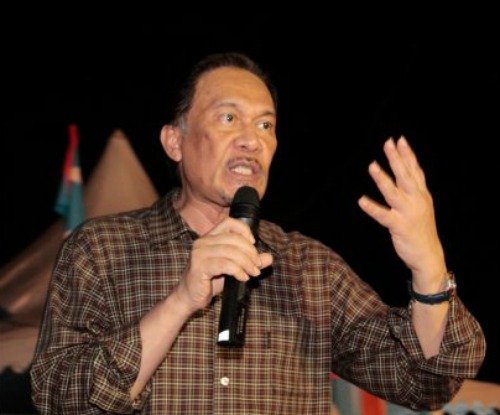 Anwar Ibrahim had been casting his gaze on Johor for some time. From his perch he could sense that the mood was shifting. After all Johor had similar racial composition to Selangor. If Selangor could fall, so could Johor.

And so began "Operation Southern Cross." Right from get go, Anwar began to bombard Johor. Anwar would go in and soften the ground, followed closely by the PAS and DAP machine. His ceramahs began to gather steam and attract audiences.

This campaign was not an overnight or a two week campaign. Anwar had been doing this for the best part of the last 4 years.

The outcome could be seen in a recent rally held in Gemas. That rally was smack in the middle of the UMNO heartland, an area where UMNO gets about 70-80% of Malay support. Yet, there were almost ten thousand people turned up to listen to Anwar Ibrahim.

This development is beginning to sound eerily familiar. BN gets arrogant and thinks they will never lose. 4th floor boys get involved in making money and side lining local warlords. Internal rivalry and sabotage rears its ugly head. Anwar attacks relentlessly by promising a better future. The people respond. The demographics are favourable.

The rest, as will the case for UMNO in Johor, is history. - Sir Wenger Khairy aka pirates-of-putrajaya