Hishammuddin ordered the arrest and deportation of Australian Senator while 100 armed Filipinos in Lahad Datu were being handled with kid gloves...

If the current soft 'handling' of the incursions by armed Filipinos into Lahad Datu is any measure, then it is clear that Sabahans' safety is inconsequential to the federal government.

It is an irony how promptly Home Minister Hishammuddin Hussein ordered the arrest and deportation of Australian Senator Nick Xenophon while 100 armed Filipinos in military fatigue were being handled with kid gloves by the police and Special Branch officers because they had “links” in Sabah.

Xenophon arrived solo and unarmed but was considered a security threat. But in Lahad Datu, some 100 “soldiers” from the alleged Royal Sultanate of Sulu Army who were armed with “M-14, M-16, M203 and Armalite assault rifles” were considered friendly, “not militants” and “not a threat”.

These armed Filipino bandits landed in Sabah claiming ownership of the land on behalf of their Sulu Sultan.

In any other country, the Home or Internal Security Minister would have been at the site of the incursion the moment it was known.

He saw it fit to arrive in Kota Kinabalu only yesterday, seven days after the police and the “militant army” – holed up in a oil palm plantation in Lahad Datu – faced a standoff after failing to come to an agreement over their demands.

When Hishammuddin held a press conference in Kota Kinabalu, flanked by military and police top men here, he had yet to visit the incursion site.

He just rolled off what he was told. Hishammuddin said everything was under control and that the federal forces would not compromise the security of Sabahans.

“The armed group are not militants or terrorists but since they had guns, it is important our action does not lead to bloodshed,” he said in defence of the militant Muslim group from the southern Philippines.

Hishammuddin also categorically denied speculations that the intrusion had anything to do with Manila’s claims, albeit indirectly, on Sabah, and fear of repatriation of Filipinos after the federal appointed Royal Commission of Inquiry’s (RCI) devastating witness testimonies.

In the January RCI sitting, witnesses revealed details of a high level agenda to neutralise Sabah’s Christian population by offering citizenship-for-votes to arriving Muslims from the Philippines, Indonesia, Pakistan and India. The ICs were issued by the National Registration Department (NRD) under instruction from top level federal Umno leaders.

“The issue is not political, not racial; [it has] no connection with the stand on sovereignty but in our context this is our land and this is something that can jeopardise the nation’s security,” Hishammuddin said.

The minister must think Sabahans and Malaysians are stupid.

‘Sabah is our home’

The Philippine media, meanwhile, has gone to town with the news that the Malaysian government may send back hundreds of thousands, if not millions, of Filipino illegal immigrants, many of whom had in their possession dubiously-acquired Malaysian documents.

In Manila, the Sulu group leader SuItan Jamalul Kiram asserted that his followers – some 400 men – were resolute and would stand their ground in Lahad Datu for “however long it takes”.

“Nobody will be sent to the Philippines. Sabah is our home,” so proclaimed Jamalul, who is one of the many claimants to the elusive throne.

But unlike the other claimants, Jamalul’s position as Sultan of Sulu is recognised by Manila and President Benigno Aquino was reportedly “informed of the incursions since Day One”.

Jamalul had even proudly announced that if his army in Lahad Datu was armed, then the weapons did not come from the Philippines but were already available in Sabah.

In an interview with the Philippine media, Raja Azzimudie Kiram, the leader of the group and brother to Jamalul, said his men in Lahad Datu were equipped with “all kinds” of weapons including “M-14, M-16, M203 and Armalite assault rifles”.

This can only mean that the Sulu “army” could have been stocking arms in Sabah for quite sometime.

Now isn’t this a serious offence? In Malaysia being in possession – illegally – of a normal firearm is a fatal crime punishable by death; what more when we are talking about combat guns.

Remember the Al-Maunah group caught hauling modern guns some years back? Remember how the authorities quickly rounded them up and dealt the harshest possible blow.

The authorities said the Al-Maunah groups were waging a war against the Malaysian Yang di-Pertuan Agong and as such the offence was punishable by death.


So why is the federal government being tentative about this band of militants who wants to “seize” or “reclaim” Sabah?

These armed militants from the Tausug and Bajau communities from Jolo, Basilan and Tawi Tawi who have been landing in batches since Feb 9 and with the latest arrivals on Feb 16, are well into the siege.

They have been holed up near Felda Sahabat since the Malaysian security forces cordoned off the area on Feb 12.

Strangely enough, Prime Minister Najib Tun Razak, who was on a whirlwind visit to Beaufort, Papar and Tuaran in Sabah during the time, said nothing about the armed landings.

Yesterday, Hishammuddin called on the people not to listen to rumours or speculations and forced down his version of what was going on in Lahad Datu, which incidentally is far from the truth.

Said Hishammuddin: “There is a lot of speculations and rumours flying. I have the correct information and can confirm that most of the speculation is baseless.

“That is why I came here today to explain to the people of Sabah… because it involves the lives of those who are just doing their duty to ensure our security.

“So let me go and see for myself so that I can give explanation and so that there won’t be any quarter who will try to create chaos.”

Senior newsmen here scoffed at Hishammuddin’s remarks calling him an “idiot” and an “imbecile”. 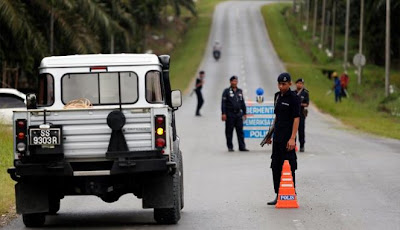 Meanwhile, as the world awaits Hishammuddin’s briefing on how he would broker a deal to peacefully send the group of armed militants back to the Philippines, another “wayang” is taking place.

This involved Chief Minister Musa Aman’s alleged nephew – Manuel Amalilio – who is wanted by the Philippine government for running a Ponzi scheme that scammed 15,000 Filipinos of RM859 million.

Amalilio, who holds two passports – Philippine and Malaysian – was detained by the Sabah police and handed over to the Philippine authorities. But 10 minutes before he could board the flight back, he was re-arrested.

No explanations were given but he was later charged and immediately sentenced to two years in prison after a “court” hearing in a Sabah hospital ward. He was charged with having a “false” Philippine passport.

The Philippine government, however, has never stated that Amalilio’s passport is false or illegal in any way.

A Philippine minister has reportedly accused Musa of interfering in the initial deportation of Amililio but Musa has denied this.

Many of those who invested in the scheme were important people in the southern Philippines including those in the security-military establishment.

Also of concern is the fact that the Philippine military and US military “advisers” are monitoring the situation and are on alert for Abu Sayyaf movement in the region.

As such, the undetected movement of boatloads of the Jamalul’s men heading for Sabah is suspicious, to say the least.

Now after the incursion in Lahad Datu, the Malaysian government is saying Amalilio, who is also known as Muhammad Kamal Sa’aid or Mohamad Sufian Saaid, may be “extradited/deported” to the Philippines. Talk about stupidity.-FMT