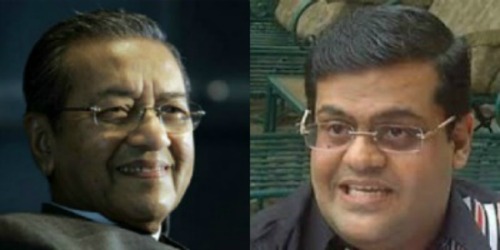 From Deepak J Tekwani, via e-mail

Tun, I refer to your statement ‘Ignore Deepak’ as your advice to Najib Tun Razak and Rosmah Mansor. I also take heed of your advice to me to seek the courts’ involvement and not use political channels to claim my rights and remedies.

For your kind information, this is exactly what I have been doing the last two years from 2010 till to date and the courts have been fair and granted judgment in my favour. However, Najib’s administration is “ignoring” these judgments and evidence produced in courts and almost all the government institutions have either swept Rosmah’s dirt under the carpet or just not replying to our various written testimonies and court’s judgment; as such I would like to seek Tun’s advice.

What would Tun do in my place? Being of similar paternal ancestral background, I am sure what I put forward in this letter would be exactly what Tun would have done in my situation or already done under different circumstances when Tun wrote the “historic June 17, 1969″ Open Letter to Tunku Abdul Rahman.

I was raided by Bank Negara Malaysia in 2010 for foreign currency exchange through money changers amounting to substantial sum of Singapore and US dollars. The investigation was for a period of six (6) weeks and we divulged that the foreign currency was delivered to Najib and Rosmah as payments for various deals that I had acted on as their conduit including Bangunan Angkasa Raya, Bukit Raja Land and Glomac Tower (now known as Wisma Prestige). The matter was not pursued any further.

I was also asked to be part of an investigation by MACC into the sale of an office building at KLCC to an international Islamic Bank, for which we had proved through payment slips, video statements and written testimony that I was merely acting as a conduit for Najib and Rosmah and monies were given by hand to both of them on various occasions over a period of two (2) years.

Now why is it that after such clear incriminating evidence, till to date there has been no investigation on Rosmah, Najib or Nazim (Najib’s brother)? This takes selective prosecution to an entirely different level doesn’t it? How does Tun suggest I seek duress then? Let’s talk about my court experience now.

Raja Ropiah after collecting the money, purposely delayed the issuance of the land title to us by completely neglecting her responsibilities to deliver this land title and on the sly by committing CBT, sold the land to another company at a higher price and also collecting close to RM90,000,000.00 in cash and bank guarantees from them, this too while our “Land Bond” was still valid and collecting RM13,000,000.00 from us in cash.

We also paid as disclosed in open court RM8,000,000.00 to Najib’s family. I have lodged police reports and to date zero action has been taken on Raja Ropiah and the other “R”.

Instead I had to go through a harrowing experience of receiving a foreclosure notice called a “16 D” by none other that Najib brother’s, throught his law firm exactly 24 hours after my press conference informing the media of the corruption and malpractice of this couple.

Tun, pray advice me which bank does a foreclosure without even going through the legal process involved? Anyway by sheer “coincidence” their foreclosure was for RM30,000,000.00 and Boustead Holding suddenly appears out of nowhere to agree to purchase our company that owns this 200 acre land under the name of Asta Canggih Sdn Bhd for the same RM30,000,000.00!

Wonders of wonders right ? The best part is Boustead also paid us in “advance” before signing the agreement on condition that we withdraw the case from the courts immediately as the open court date was in the same week. Now Tun, please advice me what you would have done in this circumstances? The best part is that Raja Ropiah was paid a further RM29,000,000.00 as her “sentence” for the CBT.

a) used unlawful means to conspire against us with the predominant purpose of injuring us,

b) committed breach of the Letter of Undertaking they issued to us,

The bank was also exposed in open court of:

iii) Cheating Bank Negara Malaysia by showing loans exceeding its own Paid up Capitalat the material time as loans to third party companies when in fact it was loans to its own subsidiary.

We had written to Bank Negara Malaysia to take necessary action against this international Islamic Bank as per the banking laws:

a) Removing the CEO immediately

c) Having the bank announce this unlawful conspiracy and breach to depositors and shareholders in Malaysia and the middle east where it is a public listed company and also governed by a Board of Trustees.


My numerous letters to Zeti Akhtar and the Board of Directors of Bank Negara Malaysia till to date have remained unreplied. Why? Because Bank Negara knows that Rosmah and Nazim were involved in the building sale.

Our written and video testimony to MACC in 2011 have confirmed the involvement of both Rosmah and Nazim in the transcript including evidence of payments made. Hence, Tun, having a court judgment is not enough today in Malaysia where even our most sacred institution Bank Negara Malaysia sings to the tune of Rosmah and no longer “I did it my way” anymore.

May I ask Tun, do you want to see Barisan Nasional and Malaysia destroyed by these blatantly corrupt couple? I seek your advice, what do I do after going to court and winning the case? All the institutions are under the control of this Bonnie & Clyde couple. Where do we go from here?

The International Court of Justice? The media? Or the opposition? Please advice me through your wisdom Tun as I am both perplexed and disgusted with what has happened to Malaysia in the last 11 years through the paralysis of our government

I am sadly disappointed with Tun’s press statement asking that I be ignored. How can I be ignored when we are defending the same country’s dignity and integrity.

Maybe Tun is listening to the wrong people who tell Tun that I am working with the opposition to topple the government. Tun, I am a nationalist, I won’t help anyone topple my country’s dignity, No ONE.

Tun, you yourself have said that Najib is very weak, which is a reality. The Chinese know the level of corruption is not going to end and the Malays know that only a handful of “elite” Malays get very rich and the rest rely on scholarship, KR1M, BR1M and DR1M, eventually we all will become beggars or maids at the rate things are going where our debt will hit RM one trillion by 2014.

Everyone knows that Najib is Santa Claus PM giving “cash” to everybody to win by bribing the nation. Everyone knows the real PM is Rosmah and Najib is just the happy Santa Claus PM. My concern is not only about the country going into riots during or after election but also if the military takes control in all the chaos that will precede a dirty election.

With the risk of facing the severe consequences of my words, I ask that Tun M propose that Najib be asked to resign and his deputy (Muhyiddin Yassin) to lead a refreshed BN into the election mode which must happen in the next 60 days.

Tun, I hope that my letter is accepted by Tun in as sincere a manner that it is written for and that no matter how bitter the truth is, it will still remain the truth and will always prevail over the lies and denials of plunderers and murderers.- FMT

Deepak wants Najib out, Muhyiddin in