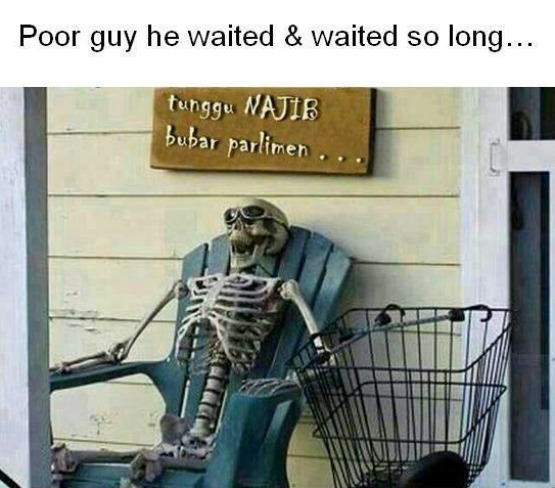 Of the 1,021 voters polled between Jan 23 and Feb 6, only 61 percent were satisfied with the premier's performance, down two percentage points from a similar survey held last December.

According to Merdeka Centre, the decline is mainly attributed to a four-point drop in satisfaction among Malay voters, down from 77 percent a month earlier.

Chinese satisfaction with Najib's performance was at status quo at 37 percent, while Indian support dipped one point to 75 percent.

Najib's dissatisfaction rating has increased by two points to 32 percent - making it the highest since he took power in 2009.

Merdeka Centre noted that the survey was conducted following the Jan 12 opposition rally at Stadium Merdeka, the start of the Royal Commission of Inquiry hearing in Sabah, and criticism of the federal government by businessman Deepak Jaikishan and former police chief Musa Hassan.

Najib's approval rating was at its highest, at 71 percent, in December 2011.

Unsurprisingly, Najib's disapproval rating has increase 10 points, up from 22 percent in December 2011.

Meanwhile, the survey also found that there is a consistent gap between voters sentiments towards Najib's, the federal government and BN.

Less than half the respondents are satisfied with the performance of the federal government (48 percent) and BN (45 percent), which has been relatively consistent over the past year.

A breakdown of voter sentiments towards BN revealed that 62 percent of respondents who earn below RM1,500 were "happy" with BN.

However, such responses are gradually lower across the income scale, with only 31 percent of those earning more than RM5,000 stating that they were "happy" with BN.

Similarly, those working in the private sector or are self-employed are less inclined to be "happy" with BN as compared to those working as civil servants or are not formally employed.

Regionally, voters in the east coast of Peninsular Malaysia are more likely to be happy with BN, compared to the more urban west coast.

Only 16 percent of Chinese respondents expressed the same sentiment.

The survey also found that 52 percent of female voters were "happy" with BN, compared to 38 percent of male voters.-malaysiakini