So Azmin Ali was right after all.

The PKR deputy president had predicted a fortnight ago that Opposition Leader Anwar Ibrahim would be dragged into the morass of responsibility for the issuance of citizenship papers to illegal immigrants in Sabah in the mid-1990s.

Until Azmin went public with his premonition, the person directly implicated as responsible for the traitorous deed, going by testimony of witnesses before the royal commission of inquiry into the matter, was former prime minister Dr Mahathir Mohamad.

Even before a witness could come before the RCI to tell of a role by Anwar, Mahathir went public yesterday with his claims that Anwar was involved in the machinations to defraud the exercise of the vote in Sabah in the 1990s.

A man who had hitherto steadfastly denied he was involved in any way in the issuance of citizenship papers to illegals in Sabah only to be directly implicated by witnesses who have already testified to the RCI has now turned out to implicate his deputy in the exercise.

Given his already proven bent for mendacity, the accusations by Mahathir against Anwar should not come as a surprise.

If the accusations by Mahathir are not true, Anwar should sue him straightway, like he has done with several individuals and organisations that have supposedly libeled him in the last few years.

The propensity of the courts to find in Anwar's favour these days ought to encourage him to seek this recourse. It will also stand him in good stead.

Compared to Mahathir and Prime Minister Najib Abdul Razak - both have been accused of a slew of impugnable actions, from illicit wealth accumulation to involvement in a murder cover-up but disdained legal recourse to clear their names - Anwar's inclination to use the courts to clear his name is necessary and commendable.

From the beginnings of the controversy over the issuance of citizenship to illegals in Sabah, Anwar has maintained an unvarying stance: he said he was out of the loop and therefore not culpable.

In recent weeks, Anwar has expatiated on the stance by saying that he did not attend any meetings on the matter, nor was he consulted by departmental heads, nor did he issue any directives on the matter.

Caught with his pants down

Thus far, disclosures emanating from the RCI chart a trail of responsibility for the entire project that leads up to the late Megat Junid Megat Ayob and Aziz Shamsuddin, two of Mahathir's flunkeys - from the Home Ministry and the Prime Minister's Department respectively when Mahathir held both offices.

After denying all these years that he was involved in the project, Mahathir has been exposed by the RCI as having been on less than friendly terms with the truth, to put things mildly.

Caught with his pants down, he offered extenuations for his conduct such as the ability of the Sabah illegals to speak Bahasa Malaysia and their supposedly long residence in the state prior to their qualifying for citizenship papers.

More obnoxious still was his claim that founding prime minister Tunku Abdul Rahman (right) did no less by offering citizenship to one million non-Malays on the peninsula in the period immediately after independence in 1957 when that gesture was clearly part of the social contract between the departing British colonials and the people they handed power to.

Usually, people who will say anything at all as a way out of a tight corner are often the victims of diminished self-esteem.

With Mahathir this is not the case. He is engaged in a more destructive endeavour, which is the fostering of a subversive perspective in which the line between the factual and the false and between the rational and the sophistical is blurred.

Fiends like him obey no rules safe the ones they engender as they traipse along their destructive paths.

The poet WH Auden got the drift. "The Ogre does what ogres can. Deeds quite impossible for Man," wrote Auden in one of his poems.

The former prime minister has turned out to be an ogre to all except a bunch of acolytes who have the beneficiary-cum-victims of the derangement he has visited on the country in 22 years as its CEO and in the last 10 years of his retirement.

Whether a former deputy of his who carved out an excruciating escape from the man's smothering clutches has been inescapably scarred by the experience has now become a question of crucial importance on the eve of a general election of the utmost gravity to the country. - Terence Netto,Malaysiakini 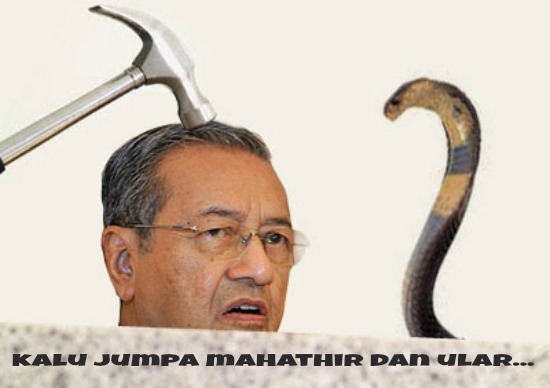 This could cause them to grow less, flower less, and maybe even die.

Louis, a new delivery tradition has been created: the
"Mulch Man. Depending on the density of the mulch, one should lay two to six inches of mulch over topsoil in the vegetable garden.

Dont forget before this, other people also benefitted from jus soli of 1948 by the british and became citizen of the malay federation despite being foreigners