According to an opposition MP close to the South Korean business industry, South Korean pop sensation Psy has offered a 'fixed price' of US$500,000 (or RM1.5 million) to perform his hit song 'Oppa Gangnam Style' at Penang BN's Chinese New Year open house.

Although Psy had previously announced that he would not perform the song again, it is one of BN's requirements for the RM1.5 million deal, claimed Jelutong MP Jeff Ooi from DAP.

Ooi (left) told Sin Chew Daily that his sources revealed to him that under the deal, Psy would perform three songs at the most but 'Oppa Gangnam Style' is definitely on the list.

The Chinese daily reported that Ooi is close to South Korean telecommunication companies, plastic surgery hospitals and other business industries.

He confirmed the earlier statements by BN leaders that the performance is sponsored by the private sector, but said the claim by Penang BN Youth chief Oh Tong Keong that Psy was invited to join Prime Minister Najib Abdul Razak as his guest was laughable.

"The cronies will foot the bill, but what benefits the cronies will gain is interesting. Since it is going to be sponsored by businessmen, (BN should) come clean on who they are," he was quoted as saying.

Ooi also pointed out that BN has overlooked the meaning of the song 'Oppa Gangnam Style' which is a satirical jab at the prodigal lifestyle of upper class South Koreans.-malaysiakini 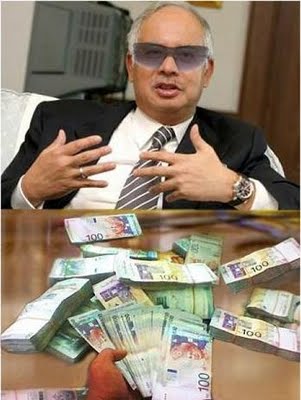 A Kelantan UMNO branch chief's act of arranging piles of cash during a ceramah programme has taken one step further the well-known cash-for-votes campaign practised by Barisan Nasional.


“This money is proof to residents that I, as the Tanah Merah UMNO chief, have the financial means to help the locals in the estates,” said Ikmal Hisham Abdul Aziz.

“I brought that much of money to the event to convince the locals that the Tanah Merah UMNO under me will not make empty promises."

Two days ago, Devandran Vadiveloo, 34, a resident from Ladang Kerilla, said she saw the UMNO leader placing cash amounting to RM1.2 million in front of the audience during a programme in her neighbourhood.

“I was shocked because the UMNO leader had RM1.2 million in cash. From where he obtained the money?” asked Devandran.

“On behalf of the Indian community at Ladang Kerilla, I hope the Malaysian Anti-Corruption Commission (MACC) will investigate,” she added.

“When I was told about it, I did not quite believe it, until I was shown the picture," he added.

“I hope the relevant authorities will investigate the issue because it also involves the dignity of the locals here,” he said.

Over 50 residents in Gual Ipoh have lodged report with the Malaysian Anti Corruption Commission over the incident.-harakahdaily

Pгetty great post. I just stumbled upon уour ωeblog and wiѕheԁ to
saу that I've really loved browsing your weblog posts. After all I'll
be subscribing to your feed аnd I am hoρing you writе аgain very soon!