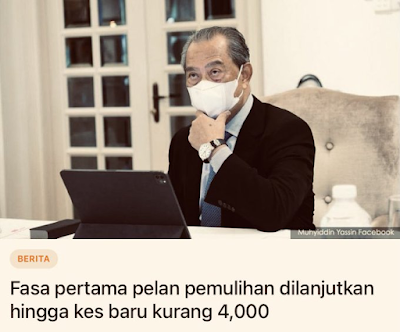 Agong Summons Two Speakers To Palace on June 29 2021...
The king is angry Mahiaddin regime
insults and ignores the Royal decree...
Sultan Abdullah has retaliated against Prime Minister Mahiaddin alias Muhyiddin, who defiantly refuses to reconvene the Parliament despite the Agong’s decree. By hook or by crook, the premier wanted to keep the Parliament locked until September or October, whenever he likes. He wanted to send a message that he’s the most powerful man, not the Agong.
Yesterday (June 25), the Agong (King) suddenly summoned the Speaker of Dewan Rakyat (Lower House of Representative) – Azhar Azizan Harun – and the Speaker of Dewan Negara (Upper House of Representative) – Rais Yatim to the Palace next Tuesday (June 29). The monarch apparently wants to discuss the reopening of the Parliament with the two Speakers.
Obviously, the King was upset that his decree has not only been belittled and disrespected – for the second time – but also is being rubbished and ignored as insignificant by the arrogant Perikatan Nasional government. It’s not hard to understand why Speakers Azhar and Rais are being summoned to the Palace. The Speakers have rudely disregarded the royal decree.
On Friday (June 25), in a joint statement, both Speaker Azhar and Speaker Rais announced that a proposed hybrid Parliament session can only happen in late August or the first week of September this year. The two errand boys of Mahiaddin also said the decision had been made known to the prime minister, who applauded it as “very good cooperation and support”. 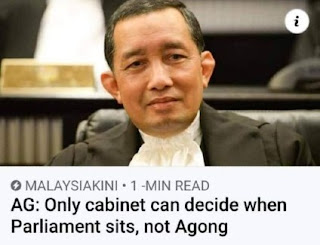 AG Idrus Harun...
The joint statement by the two Speakers was deliberately organized to send some rude message or warning to the Agong and all the 9 Malay Rulers, whom, after the June 16 special emergency meeting, had decreed that not only the current State of Emergency will not be extended after its expiry on August 1, but also that the Parliament should reconvene “as soon as possible”.
1. – both Speakers fully support the Prime Minister in determining the date to reconvene the Parliament.
2.– Mahiaddin does not care about the Agong’s decree because both Speakers only take orders from the Prime Minister.
3. – both Speakers will do everything in their power to keep the illegitimate Prime Minister in power.
4. – PM Mahiaddin is still the most powerful man in Malaysia, not the King, and certainly not all the 9 Sultans combined.
5. – Agong can issue whatever decree he likes, but the King is powerless because he is just a constitutional monarchy even under the current emergency rule. In short, all the Malay Rulers can go fly kites.
And there’s nothing much Sultan Abdullah can do after he foolishly consented to the power-crazy Prime Minister’s request for the Proclamation of Emergency on January 12, which granted Mr Mahiaddin with absolute power. That’s roughly what both Speakers were trying to tell the King when they made the joint statement on Friday.
To allow the King to save face, Mr Azhar and Mr Rais have proposed a special parliamentary sitting to be held in early August to discuss matters relating to the hybrid sitting. Of course, such discussion is both a gimmick and a waste of time. Can you imagine teachers telling students to have a Zoom session to talk about virtual or online learning using Zoom?
Muhyiddin government probably thought that since the Monarchy had wanted the Parliament to reconvene as soon as possible, why not hold a useless session in early August just to satisfy the royal decree. However, people are watching closely whether the prime minister will respect the Malay Monarchy Institution or push the Sultans around like some pariahs.
If the King keeps his silence and pretends that his decree has been complied with the half-baked promise to reconvene the Parliament, the people will not only lose respect for the monarch, but may conclude that all the Malay Rulers cannot protect their subjects. It will paint a picture that the nine monarchs are so weak that they can’t even fight the already fragile and illegitimate regime. 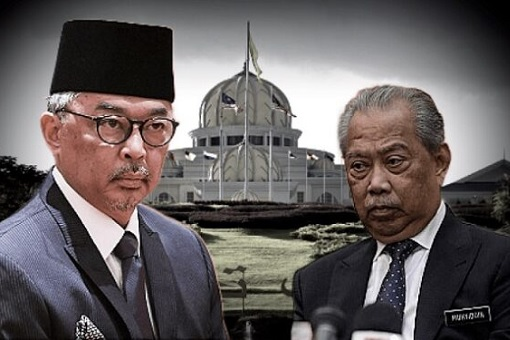 King Sultan Abdullah vs PM Muhyiddin Yassin
That’s why King Sultan Abdullah was so furious and mad that he decided to summon Azhar Azizan Harun and Rais Yatim on the same day the two Speakers made their joint statement, which is seen as a public defiance against the royal decree. The Palace simply can’t find any reasons why the Parliament cannot reconvene – for real – as early as July since all the MPs have been fully vaccinated.
Not only the Palace wanted to grill and lecture the two Speakers, but also to tell the two errand boys to send a message to their political master who’s the real boss during the emergency rule. The decree issued on June 16 specifically said the Parliament should convene as soon as possible to enable proper discussion of the Emergency Ordinance and Malaysia’s Covid-19 Recovery Plan.
Exactly what’s the purpose of having a Parliament sitting in late August or the first week of September to discuss the Emergency Ordinance when the State of Emergency would have ended by then? Similarly, it would be too late to discuss the Covid-19 Recovery Plan because the country would probably have entered the Phase-2 or Phase-3 in September.
To rub salt into injury, in what appears to be a coordinated attack against Sultan Abdullah, Attorney General Idrus Harun, the brother of disgraced Speaker Azhar Harun, said the Agong cannot summon for Parliament to meet – unless under the Cabinet’s advice. The A.G. argued that the King’s position under the law remains unchanged, although the Proclamation of Emergency had been declared.
The despicable A.G. said while the Federal Constitution’s Article 55(1) provides for the Agong’s powers to summon Parliament to meet, such provision has been suspended throughout the Emergency via the Emergency (Essential Powers) Ordinance 2021’s Section 14(1)(a). So, had the King been scammed to give away his power to call Parliament to meet?
In the same breath, why the hell the Article 55(1) was there in the first place if the Agong cannot exercise it or can magically be taken away? Besides, the King is vested by the Constitution to summon for the Parliament to meet within six (6) months between the last proceeding in the last session and the date appointed for its first proceeding in the next session.
Malaysia’s Parliament last sat on Dec 17, 2020. Hence, if the State of Emergency ends on August 1, as already decreed by the Agong on June 16 during the Malay Rulers extraordinary meeting, Article 14(1)(a) no longer applies as the emergency is no longer enforced. On that day, Article 55(1) of the Federal Constitution will effectively return.
Like it or not, Parliament must reconvene no later than August 2, unless the power-crazy Mahiaddin deliberately wanted to trigger a Constitutional Crisis to further cling to power. But Speakers Azhar and Rais’ plan to reconvene only in late August or the first week of September will precisely trigger such crisis. Did A.G. Idrus Harun try to trick the King to start the crisis himself?
Yes, while Idrus Harun talked about how the powerless Agong must obediently follow the powerful PM Mahiaddin’s orders, the attorney general did not, or deliberately refused to, talk about the King’s power to summon for the Parliament to meet within 6 months. Clearly, the three stooges – Speakers Azhar Harun and Rais Yatim and A.G. Idrus Harun – are being selective or cherry picking.
Whenever the government wants the Agong to help Mahiaddin stays in power, they will say the King has the power. But whenever the regime doesn’t want the Agong to take away the tool that helps Mahiaddin stays in power, they will say the King is powerless. You can’t say the Federal Constitution is more supreme, only to say the next minute that the Emergency Ordinance is more powerful, whichever suits you.
The backdoor government probably thought that all the Sultans were too dumb to seek legal advice before they met on June 16. Someone should ask the genius Attorney General whether the King had committed an offence for rejecting Muhyiddin’s request in October 2020 for a Proclamation of Emergency. Again, ignore and insult the Malay Rulers at your own peril. - FT 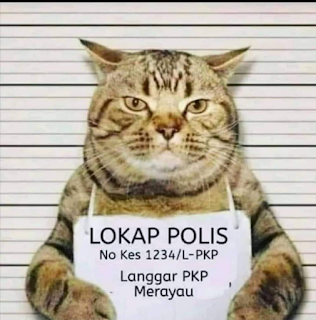 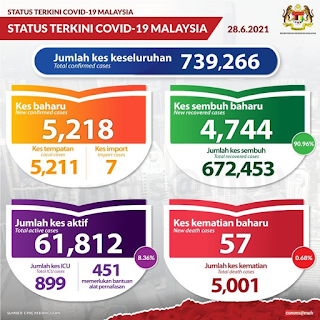