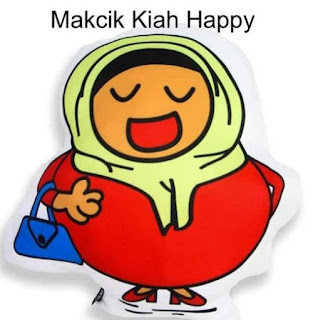 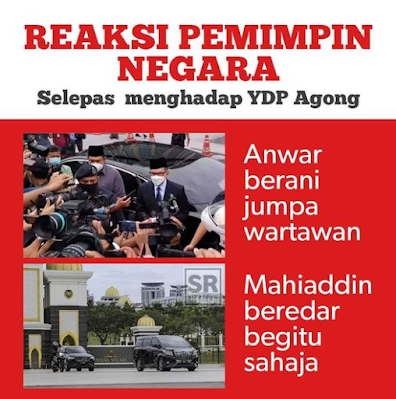 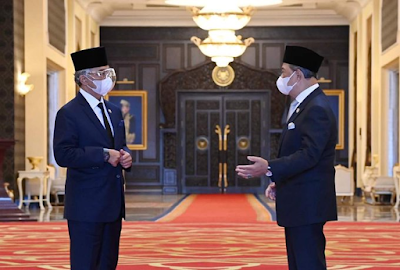 Special Conference of Rulers...
The Yang di-Pertuan Agong will convene a special Conference of Rulers on June 16. On the agenda are the ongoing efforts to handle the Covid-19 pandemic and its implementation during the emergency.
"This conference is His Majesty's initiative and will be chaired by His Majesty," Istana Negara Comptroller Ahmad Fadil Shamsuddin said today. The last time a special conference was held was on Oct 25, 2020.
This special meeting follows a series of audiences granted by the Agong to political party heads, which began today. There are many speculations as to why the Agong was undertaking these unusual steps in such unprecedented times.
So far, the party heads who have been granted audiences today have informed the press that the discussions were mostly limited to the economy and the pandemic. 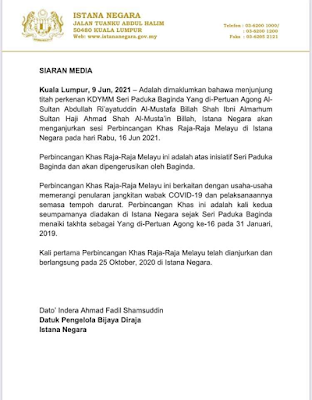 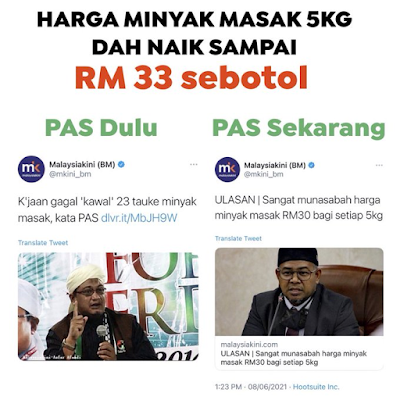 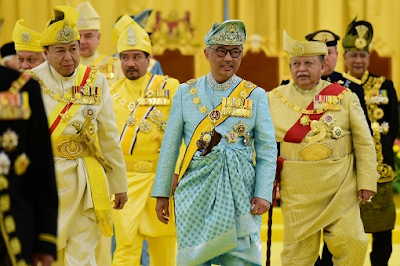 A special emergency meeting of 9
monarchies could see a new government...
As the half-baked full lockdown enters the second week, the clueless and incompetent government of Muhyiddin Yassin continues its trademarks – SOP (standard operating procedure) flip-flops and policy U-turns. After public uproars, now the NSC (National Security Council) says supermarkets, grocery stores and convenience stores can sell non-essential goods after all.
The Malaysian government was ridiculed and mocked by its own people when NSC’s half-baked SOP dated June 2 warned that supermarkets, hypermarkets, pharmacies, mini markets and convenience stores are “limited to food, beverages and essential needs sections only”. The confusion saw Caring Pharmacy temporarily suspended the sale of items such as hair dye and hair gel.
Another flip-flop involves the RM70 million MySejahtera app. People were once again fed with frustration and confusion after the emergence of a video clip where a police officer said the app users must update their status “every day” or risk a RM2,000 fine. This came after 31 factory workers in Sitiawan, Perak were fined between RM1,500 and RM2,000 for failing to update the app.
Now, both NSC director-general Mohd Rabin Basir and Senior Minister cum Defence Minister Ismail Sabri Yaakob say failure to update the MySejahtera application is not an offence. Embarrassingly, the authorities said the compound tickets issued on Saturday would be cancelled. Exactly why can’t the super expensive app automatically update itself is quite a mystery.
Like it or not, the damage is done. The Malay-centric Perikatan Nasional government has proven again that it is incapable of enforcing a simple SOP, let alone running a country. They expect supermarkets to comb thousands of items and hide non-essential goods. And they thought people had nothing better to do than to update the overpriced “cacat” (defect) MySejahtera app every hour. 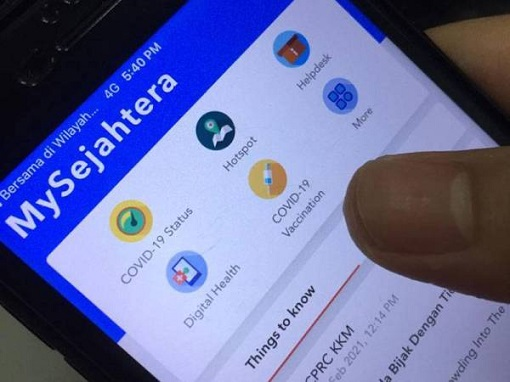 MySejahtera App - Covid-19 Vaccination
The backdoor regime is so clueless, incompetent, and corrupt and out of touch with the hardship faced by people on the ground that it must be terminated. And you know the regime is extremely panicked when cyber troopers were paid to defend the indefensible. But there might be nothing left to defend if the Malay Rulers, arguably the last defender, do not act fast.
After months of frustration and anger expressed by young Malaysians, especially youth from the dominant ethnic Malay majority over economic hardship and uncertainty about their future, the heads of nine royal households have finally agreed to hold an emergency meeting next Wednesday (June 16) to discuss the Covid-19 crisis plaguing the country.
However, prior to the Malay Rulers’ emergency meeting, King Sultan Abdullah is scheduled to meet leaders of all political parties, including those in the Opposition, this Wednesday (June 9). The King will first meet PM Muhyiddin, the president of Bersatu (PPBM), follows by Opposition DAP and PKR (Thursday, June 10), and Parti Pejuang Tanah Air (Pejuang) and UMNO on Friday (June 11).
Curiously, other parties such as PAS Islamist party, Parti Amanah Negara, Gerakan, MCA, MIC and Sabah and Sarawak parties might not meet the monarch, suggesting that a new government could be formed. While Muhyiddin’s Malaysian United Indigenous Party has 31 MPs, Opposition Democratic Action Party (DAP) and Parti Keadilan Rakyat (PKR) have 42 MPs and 35 MPs each.
The United Malays National Organisation (UMNO), the biggest party with 38 MPs in the Perikatan Nasional ruling government has already given its supreme council the mandate as early as March to withdraw support for Muhyiddin Yassin at any time it sees fit. If UMNO were to tell the King that it withdraws its support for the prime minister, the backdoor government will collapse.
Mahiaddin alias Muhyiddin is believed to have lost his majority support in the 222-seat Parliament since early this year, forcing him to declare a State of Emergency on January 12 to cling to power. At most, he has 110 MPs, less than the minimum 112 parliamentarians to rule with a simple majority. Even if a handful of UMNO MPs withdraw their support, it’s game over for him. 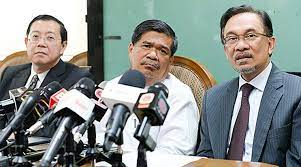 The PH leaders...
There are two major signs that a new political landscape could happen before the Christmas. First, there is no need for the King to meet DAP and PKR if indeed the status quo would remain. Even if the intention was to have empty talks over coffee just to entertain the Opposition, the monarch does not need to meet the prime minister, let alone UMNO president thereafter.
Second, the meeting among the 9 Malay Rulers is not a Conference of Rulers, but a special emergency meeting. The sultans can choose not to meet – they had previously cancelled a scheduled Conference of Rulers meeting back in February 24 due to lockdown. The next conference is set for June 30. So, what’s the urgency of having an emergency meeting next week, if not to discuss the fate of Muhyiddin?
As much as Sultan Abdullah of Pahang wanted to maintain the “you scratch my back and I scratch yours” relations with Prime Minister Mahiaddin, the King cannot ignore his brother rulers this time. Arguably, the monarch had made a mistake when he granted Muhyiddin’s request for a Proclamation of Emergency on January 12, without any consultation with fellow sultans.
When Mr Muhyiddin first asked Sultan Abdullah for the same emergency rule in October 2020, which will grant the premier an absolute power to rule like an emperor, it was rejected after the King and his brother sultans deliberated over the matter in a special emergency meeting. The current state of emergency, which will end on August 1, is highly unlikely to be extended.
Regardless whether the objective of the special emergency meeting among the nine royal households is to correct the mistake made by Sultan Abdullah, or to debate if the emergency rule should be extended, the fact remains that it has failed to contain the pandemic. Malaysia is the only country in the world that has declared an emergency as well as locking up the Parliament under the pretext of fighting Covid.
Sultan Ibrahim of Johor is arguably the wealthiest and most influential among the nine monarchies. He was instrumental in forcing the government to declare the current full lockdown on May 28, making Muhyiddin looked like a fool when he reversed his earlier pledge not to ever shut down the country due to the huge impact on the economy. 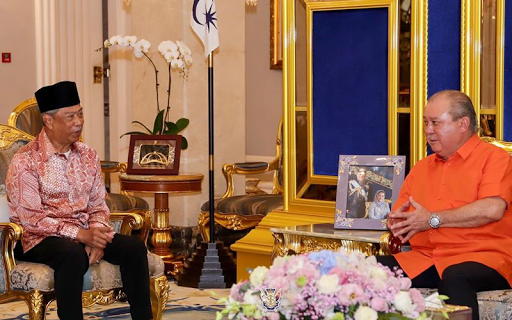 Muhyiddin and Sultan of Johore...
One of the cheerleaders of Muhyiddin, the Sultanate of Johor is fast losing its patience over the incompetence of the new government in both handling the pandemic and managing the economy. Johor Bahru is dying a slow death while Johor residents face a double whammy after coping for months with restrictions on the commute to Singapore where many used to earn livelihoods.
With the nation’s border with Singapore remained sealed, not only hundreds of thousands of Johorians cannot work in Singapore, but local businesses, restaurants and hotels dependent on Singaporean customers have been forced to close for good. Sultan Ibrahim realizes that it’s time to cut loss, no matter how “Malayness” the prime minister claims himself to be.
Under Perikatan Nasional, unemployment rate has skyrocketed to 4.8%, foreign direct investments (FDI) has dropped by 68%, some 32,000 small-and-medium-businesses have closed down, Fitch Ratings’ has downgraded Malaysia’s credit rating from A- to BBB+ and economy – GDP – has plunged by 5.6% – the worst contraction since the 1998 Asian Financial Crisis.
Despite the regime’s chest-thumping and gloating about a Malay-Muslim government, young Malays could see clearly how the clueless and incompetent backdoor regime practises double standards, hypocrisy, corruption and abuse of power. And Sultan Ibrahim could see too the bloated Cabinet of 72 ministers and deputy ministers are like a bunch of monkeys running the zoo.
At the end of the day, money talks and bullshit walks. The country’s nine monarchies cannot afford to wait until an uprising of Malay youth to salvage the situation. More importantly, the sultans cannot sit on their hands while watching the destruction of the economy. People are clever enough to pinpoint that it was the King who appointed Muhyiddin to the throne, despite the dubious majority support commanded by the traitor.
If the Malay Rulers foolishly extend the state of emergency beyond its August 1 deadline, the backlash and reaction from the angry public is unimaginable not only to the power-crazy regime, but also to the monarchies. The 2,000 daily Covid cases before the state of emergency was declared have skyrocketed to as high as 9,020 daily infections on May 29.
At best, the emergency will end after August 1, leading to the reopening of the Parliament. Muhyiddin might still get to keep his throne, but his power will be significantly clipped as a new unity government could emerge. At worst, the ending of the emergency and the reopening of the Parliament will see Muhyiddin losing a vote of confidence, leading to the formation of a new government. - FT 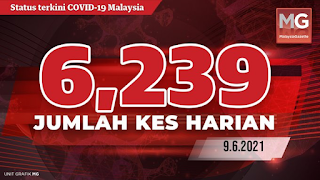