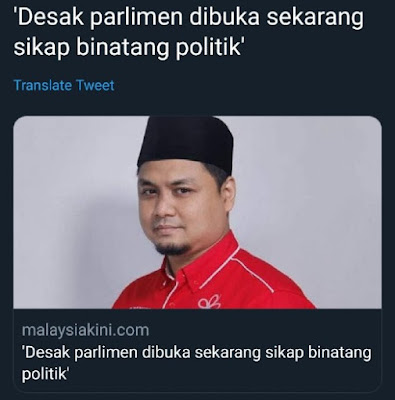 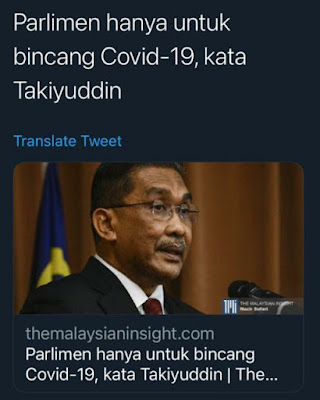 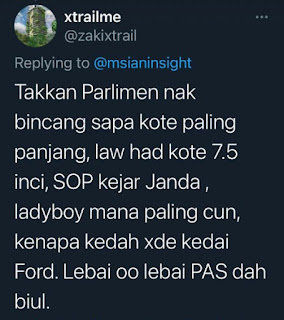 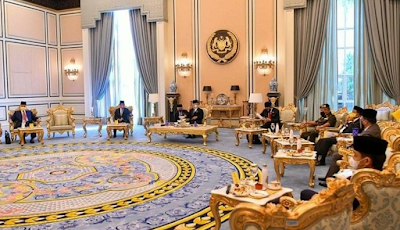 The Rulers have spoken...
Let's be honest. Upon hearing news that the Yang di-Pertuan Agong had invited his brother Malay Rulers to a special meeting at Istana Negara yesterday (June 16), we the rakyat were hoping for a decision on the status of our Parliament, the current Emergency and even the situation of the government. Most of us surely. And to be frank, we got what we wanted.
There were decisions made. Strong and firm by the Agong with full support of the Malay Rulers. Two statements were issued when the meeting ended. One was by the Comptroller of the Royal Household Datuk Indera Ahmad Fadil Shamsuddin. The other was issued by the Keeper of the Rulers Seal Tan Sri Syed Danial Syed Ahmad.
The first statement said the Agong had decreed that Parliament must reconvene as soon as possible to allow MPs to debate the emergency laws, as "His Majesty is very mindful of Parliament's role as an important platform for elected representatives to meet and discuss various issues, particularly those pertaining to the spread of COVID-19."
Meanwhile, the statement issued by the Keeper of the Rulers Seal stated that the Malay Rulers had expressed support for the Agong's views that Parliament should reconvene immediately. So too state legislatives in their respective states.
The Rulers, said the statement, "are of the position that it is important to respect the mechanism of check and balance between the executive, legislative and judicial branches to ensure a transparent administration that has integrity and is accountable to the people especially in matters of finance and government expenditure."
For the record, the Agong also spoke on the need for a strong and stable government that can function effectively to tackle the COVID-19 pandemic and revive the economy. More about this in a while.
For the record also, the Agong had said in February that Parliament could reconvene even during the current emergency period on a date His Majesty deems suitable on the advice of the prime minister.
This, the prime minister has not done, as the government is of the opinion Parliament should not or cannot be "reopened" because of the pandemic. However, with the Agong's latest decree, will the PM come forth with his advice for Parliament to reconvene? 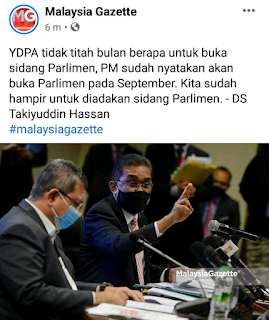 In an immediate response to the Istana Negara statement, Datuk Seri Takiyuddin Hassan, minister in charge of Parliament and Law, said the Agong did not set a date on when Parliament should reconvene."The Agong did not specify which month the sitting should be held. He only said as soon as possible," said Takiyuddin in a live talk show on social media organized by Harakah, the mouth piece for PAS. Takiyuddin is the party's secretary-general.
He is right that the Agong did not specify when Parliament should reconvene. But if I may ask, is it not that the onus is on the prime minister to advise the Agong on this matter? But to Takiyuddin, "the PM has already said Parliament will reconvene in September or October," referring to Tan Sri Muhyiddin Yassin's remarks when announcing his National Recovery Plan a few days ago.
But Takiyuddin ought to be reminded that Muhyiddin also said that would take place during the third phase of the recovery plan, obviously, when or if COVID-19 cases are under control, meaning this is not a done deal.
Parliamentary sitting and the emergency have always been a thorn for the Muhyiddin administration, with accusations aplenty that the emergency and the suspending of Parliament are political strategies to keep them in power, given their slim margin in the August House. And that it was "afraid" a vote of no confidence be called should Parliament reconvene.
This despite the opposition saying motion on vote of no confidence will not be tabled considering the current situation. But somehow Takiyuddin saw it right to say once Parliament reconvenes, "let us not discuss other matters at the sitting as the Agong wants us to focus on COVID-19". 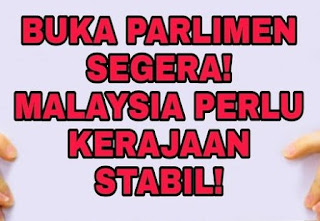 Anyway, as for the emergency, according to the statement by the Keeper of the Rulers Seal, "the Malay Rulers unanimously believe that there is no need for the state of emergency to be extended beyond August 1".
When the Agong consented to the government's request for a state of emergency be proclaimed, it was clearly stated it would be until August 1. However, of late there are concerns and even fears among many Malaysians that the emergency would be prolonged by the government using COVID-19 as a reason, or excuse if you like.
Now for a quick look back to last week when the Agong summoned political leaders to the Istana. Was the question of government brought up? We are not privy to such information. Hence we will never know. According to PKR president Datuk Seri Anwar Ibrahim, although the opposition parties' stand on certain matters can be publicly stated, details of discussion with the Agong cannot be revealed. Naturally.
But going by what Tun Mahathir Mohamad said about him suggesting the formation of a National Operations Council or MAGERAN-like administration during his audience with the Agong, this can be seen (rightly or wrongly) that the issue of government was brought up.
Anyway, as said earlier, the Agong had spoken on the need for a stable and strong government. And as mentioned also, the Malay Rulers, too, spoke on the need to ensure a transparent administration with integrity and accountability to the people, noting also that the political temperature is heating up and should be de-escalated.
Naturally, people are having their own interpretation or reading with regards to the royal decree. To the folks who are pro-Perikatan Nasional, lowering the political temperature is for the government to be stable so that it can take care of the health and economic crisis the country is facing. On the other hand, there are people who say there is a call for a change in government through Parliament so that a stable, strong and capable government will emerge. Whom do you agree with?  - Mohsin Abdullah 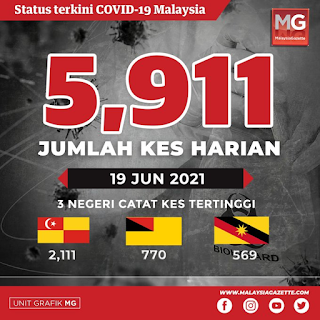