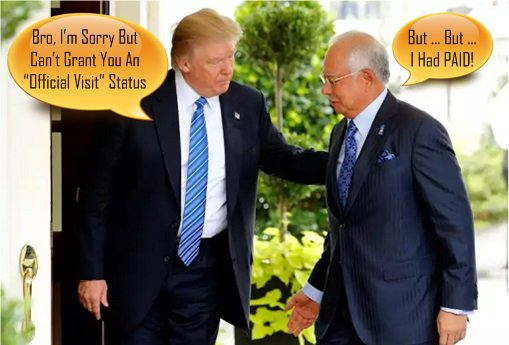 Trump has proven that the United States of America can be bought – if the price is right. And that’s incredibly shameful considering the U.S. has been foaming at the mouth fighting for democratic values and human rights, while at the same time against corruption and money laundering as contained in its Kleptocracy Asset Recovery Initiative.

By inviting the world’s biggest crook Najib Razak to the White House, the moronic Donald Trump has practically sent a message to the world that it’s perfectly alright to steal and launder dirty money, even using U.S. financial system, as long as the U.S. gets its cut. And the U.S. has the cheek to lecture China and Russia about human rights and laugh at the communist countries’ corruption.

But who can blame U.S. President Trump for being soft on Malaysian Prime Minister Najib Razak. After all, Trump was a businessman who treasures financial gains on top of anything else. Given the right price, he might even sell his own wife Melania Trump. Mr. Najib is no ordinary corrupt world leader. He was also an extraordinary apple polisher, the type of people Trump likes very much.

After spending millions of dollars lobbying (or rather bribing) Jared Kushner, President Trump’s son-in-law who happens to be a senior White House adviser, Mr. Najib deliberately picked Trump International Hotel for his stay. Costing at least US$700 a night (before discount), the room rate could skyrocket to over US$33,000 for its 6,300 square feet so-called “Trump Townhouse.”

Trump was practically on cloud nine when Kushner told him that Najib’s visit would bring in billions of dollars. Yes, the highly corrupted Malaysian leader was well prepared for the visit. After buying his way to the White House and enriching the Trump family at the Trump International Hotel, Najib Razak flew 15,328-km from Kuala Lumpur to Washington to “strengthen” U.S. economy.

In a photo which looks like Najib Razak was being interrogated, the Malaysian leader presented his value proposition to Donald Trump. The U.S. president could be sending a message of his displeasure or discomfort, if his arm-fold posture was any indicator. At the expense of Malaysian taxpayers, Najib committed to 25 planes of Boeing 737 MAX 10, plus eight 787 Dreamliners.

Najib Razak also baited Trump with a possibility of buying an additional 25 more Boeing 737 MAX 10 in the near future, bringing to the table a deal worth more than US$10 billion within 5 years. The second proposal was to get EPF (Employees Provident Fund) – a major pension fund entrusted with hard-earned money from 14.72 million members – to splash US$4 billion in U.S. infrastructure redevelopment.

The ball-sucking drama didn’t stop there. Najib also shamelessly committed millions of dollars more of investment from Khazanah Nasional Berhad (KNB), another sovereign fund, into U.S. high-tech companies in Silicon Valley. It’s laughable that while Malaysians back home are suffering from skyrocketing cost of living, Mr. Najib saw it necessary to pump more than US$20 billion to “Make America Great Again.”

Does America, a military and economic superpower, desperately need money from a third world country Malaysia to rebuild its infrastructure? While it makes perfect sense for Trump to take the investment money, as part of his “America first” policy, what does rebuilding America got to do with Najib? Why should Najib interfere in the internal affairs of the U.S.?

If Najib loves the U.S. so much that he was willing to sacrifice the well-being of his own people in favour of the Americans, perhaps he should consider migrating to the country, the same way he has been lecturing Malaysian Chinese to go back to China if they don’t like their country. Worse still, as a Muslim why should Najib worship anti-Muslim Trump?

More importantly, given that Malaysia is capable of funding U.S. infrastructure, why couldn’t Najib administration fund the local project such as the Bandar Malaysia but was reduced to begging China for bailout? And since the country has so much loose change, why then Najib couldn’t even pay US$600 million of debt to IPIC (International Petroleum Investment Company)?

Obviously, Mr. Najib’s so-called value proposition was nothing but bribing Trump administration, to which Mr. Trump gleefully accepted. The best joke of the visit was when Najib committed to fight Daesh, Islamic State, Al-Qaeda, Abu Sayyaf and whatnot. Again, Trump has proven that he’s the biggest American moron for believing Najib’s tales. 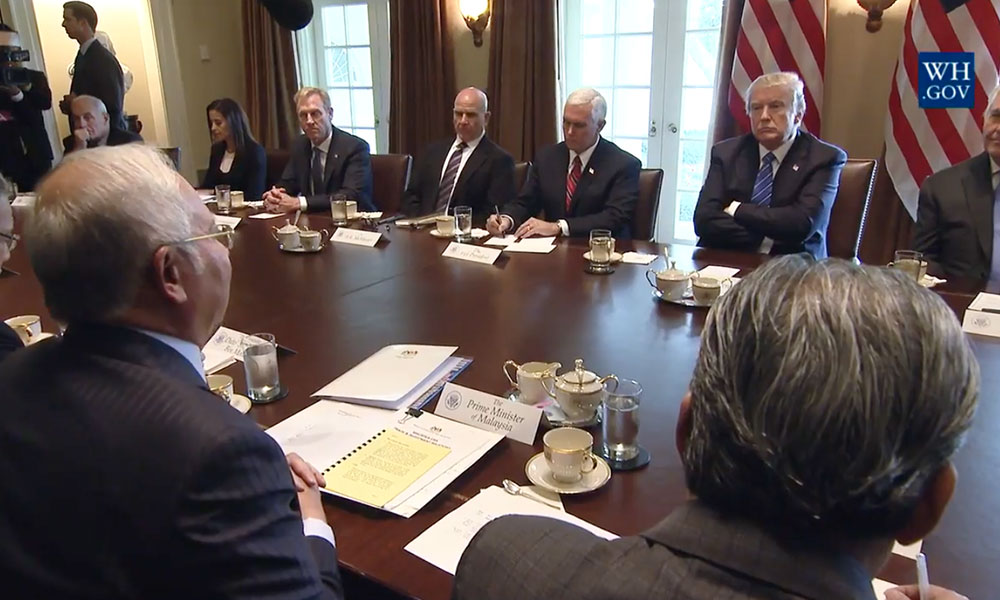 Even billionaire George Soros, a Democrats hardcore supporter, had advised Hillary Clinton – secretly – not to follow Barack Obama’s mistake of wrongfully chosen to befriend Najib Razak. Exposed in a leaked memo, Najib was described as “a poster boy for the 21st century kleptocracy” who has used “a racial supremacist ideology that is collapsing under the weight of corruption” to perpetuate himself in power.

On the subject of “radicalized Islamic terrorists”, the 3 favourite magic words often used by Donald Trump, the memo said Obama was naive because under Najib regime, Malaysia is a “net exporter” of militants to Indonesia and Mindanao. The government estimates that there are 50,000 ISIS sympathizers in Malaysia, including members of the military.

Yet, despite splashing more than US$20 billion in bribery hoping that Donald Trump could somehow influence the U.S. Department of Justice’s investigation on the US$4.5 billion 1MDB scandal, Najib Razak didn’t receive his fair share of honour. The White House had originally planned to allow reporters into an Oval Office meeting between Trump and Najib.

That was what Najib had paid and hoped for. Journalists from the Malaysian government-controlled press and TV were there ready to snap photos of hand-shakes between both leaders so that they could be used to spin and twist tales that Najib’s corruption and money laundering in the 1MDB scandal has been effectively cleansed. Unfortunately, the photo-op was cancelled for obvious reason.

Under tremendous pressure, the White House figured it would do more harm than good if photographers were allowed to take the photo – a traditional practise – of the two leaders sitting side by side. This is perhaps the first time in history that a foreign leader – Najib Razak – is denied a simple photo-op at the White House despite pledging US$20 billion to help rebuild American infrastructure.

However, the humiliation didn’t start there. Due to the high profile of Najib’s involvement in the 1MDB scandal, which represents the largest action brought under the Kleptocracy Asset Recovery Initiative, it’s still unclear of the type of visit accorded to the Malaysian leader. There’re basically 5 types of formal visits to the United States by a foreign leader – state, official, official working, working or private visit. 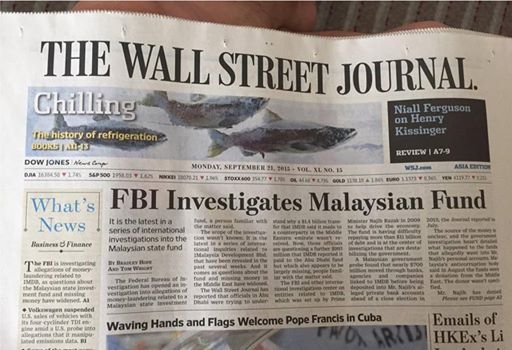 When Singapore Prime Minister Lee Hsien Loong arrived last year (2016) for his visit to the White House, he was being honoured with a 19-gun salute and a military band playing by the US Ceremonial Guard at the South Lawn, along with thousands who turned up with miniature U.S. and Singapore flags for the official arrival ceremony.

Mr. Lee and his wife were greeted by Mr. Obama and First Lady Michelle Obama, despite Singapore being a little red dot. Later, Mr. and Mrs Obama hosted Mr. and Mrs Lee to a state dinner celebrating the 50th anniversary of diplomatic relations between Singapore and the U.S. There was also the exchange of diplomatic gift, as according to the official protocol.

In comparison, Najib received none of such honours. Heck, not only was Najib denied all the bells and whistles his neighbour country Singapore received, there was also no high ranking U.S. official to receive him at the Joint Base Andrews in Maryland. Embarrassingly, his arrival in the United States was received by Malaysian Ambassador to the United States Zulhasnan Rafique.

Hey, wait a minute. Isn’t this year the 60th anniversary of U.S.-Malaysia relationship? That’s right, Najib deliberately reminded Trump during the meeting that this year is also the anniversary between both countries, but still, received a “pariah visit” status. If it was neither a “State Visit” nor an “Official Visit”, then could Najib’s visit fell into the third ranking – “Official Working Visit”?

Sadly, it wasn’t even qualified as – “Official Working Visit” – simply because Trump administration didn’t think the Malaysian leader fit for a state department luncheon. Therefore, Najib’s visit to the White House, despite Malaysian taxpayers made poorer by US$20 billion, was reduced to 4th ranking – “Working Visit”. 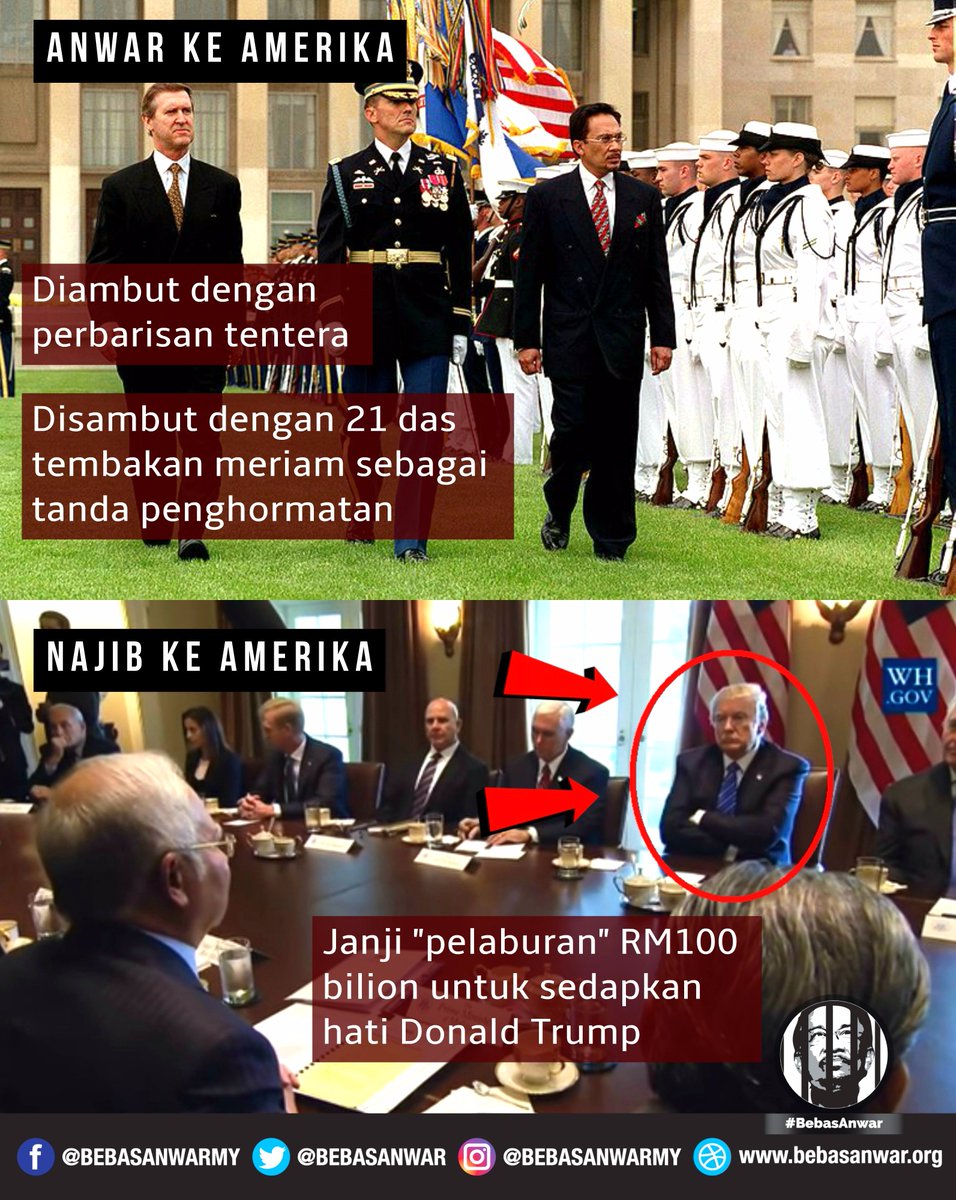 If you think about the whole White House visit, it makes perfect sense that Najib was given the “deplorable” visit status. Unlike Singapore Prime Minister Lee Hsien Loong, Mr. Najib’s visit looked more like a naughty student caught vandalizing school properties and stealing fellow classmates’ money, hence was sent to the school administration office to be disciplined.

As it turned out, in front of President Trump, Vice President Pence and Secretary of State Rex Tillerson, Najib Razak promised to behave and not be influenced by gang members Daesh (ISIS, ISIL, IS). He also promised to clean up the school compound as part of the punishment – in the form of US$20 billion investment – of which he didn’t need to commit had he not stolen any money.

Does this mean Najib Razak is more toxic than Angela Merkel? Clearly, not only Mr. Najib would be bombarded with pesky questions from the media on the US investigations into the 1MDB scandal, Mr. Trump would be humiliated too with awkward questions as to why he didn’t think it was wrong to welcome the world’s biggest crook to the White House.

Trump might have tweeted – “It’s great to have the prime minister of Malaysia and his very distinguished delegation with us today. Mr. Prime Minister, it’s a great honour to have you in the United States and in the White House.” But in reality, the way Najib Razak was being treated as the Commander-in-Chief of Malaysia, it’s both deplorable and pariah. - financetwitter. 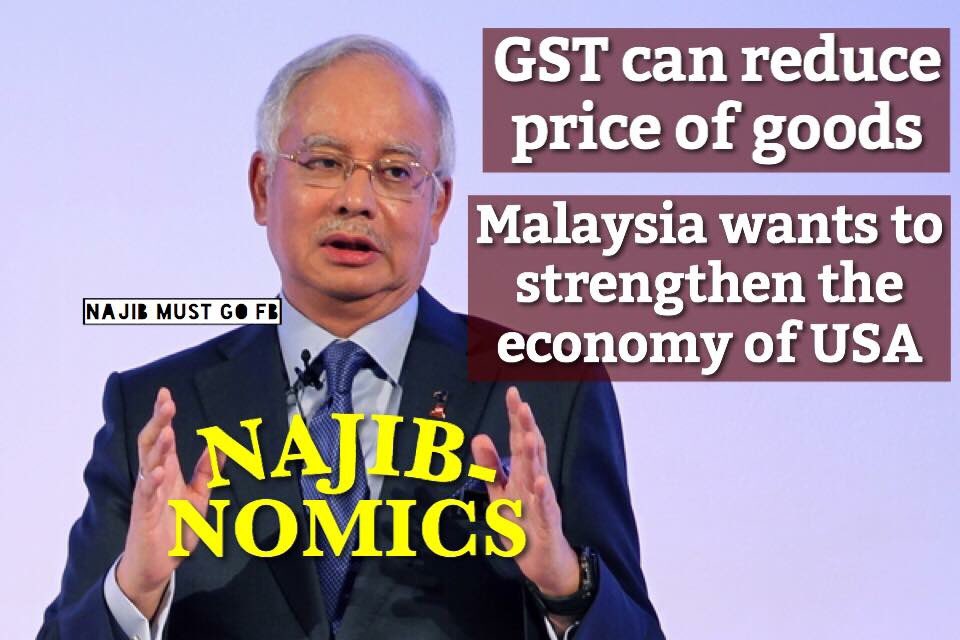 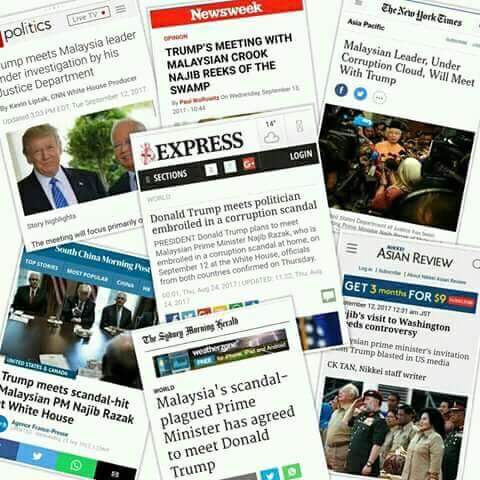