Mourn Karpal, but celebrate his achievements too...

We mourn the untimely and unexpected passing of DAP national chairperson and Member of Parliament for Bukit Gelugor, Saudara Karpal Singh.

Karpal is an eight-term MP, for Bukit Gelugor and Jelutong, as well as a three- term state assemblyman in Penang, first elected in 1978.

For 40 years, Karpal dedicated his life to the legal profession, fighting for justice, upholding our constitutional rights to freedom and human rights. His landmark cases are textbook references for lawyers.

A devoted father and husband to his wife Gurmit Kaur, both of them brought up five children who are all successful practising lawyers, except for the youngest who is an accountant. The eldest, Jagdeep is at present a Penang state executive councillor, while the second eldest Gobind is the Member of Parliament for Puchong.

With his life suddenly cut short at 74 years, following the tragic accident on the highway on April 17, Penang has lost an upstanding and outstanding leader and lawyer. The rakyat lost a fearless "tiger" with an indomitable spirit who stood up for the poor, weak, defenceless and dispossessed.

But it his fighting spirit that stands out. You can detain Karpal physically, but you can never detain his spirit.

I saw this myself, when we were both detained without trial under the now repealed Internal Security Act (ISA) in 1988, at the Kamunting Detention Camp. He suffered from severe spinal back pains, but refused to yield.

This refusal to yield was evident even after Karpal suffered an unfortunate accident in 2005, which paralysed him waist-down.

Not only did he overcome this paralysis, but he continued his brilliant legal and political career. Karpal became the first disabled person in Malaysia to be elected twice to Parliament, both times with huge majorities.

In seeking both rule of law and a better Malaysia, Karpal practised what he preached – refusing to take fees for cases of gross injustices, even from the famous VIPs like parliamentary Opposition Leader Anwar Ibrahim and Lim Kit Siang, and even from the poor Malay, Indian or Chinese.

His departure will leave an immense void, not only in his family's lives, but also in those of all Malaysians whose lives have been inspired by his principled cause.

To Karpal’s family, we share your grief in this time of bereavement with deepest sympathies and condolences.

Let us therefore mourn Karpal Singh, and at the same time, honour him by celebrating his accomplishments and realising his aspirations for justice, integrity and freedom.

Thank you, Karpal. Rest in peace.

This is the State Eulogy presented by Penang Chief Minister Lim Guan Eng during the public funeral conducted by The Penang State Government for Karpal Singh at Dewan Sri Pinang at 10.15am on April 20.

Karpal: The Tiger’s leap into immortality...

“Karpal Singh of Jelutong
Tenaciously, he stood strong
Upholding truth and justice
For democracy and peace -
This man was gentle,
This man was strong…”

This man was gentle.

Karpal’s reputation as “the Tiger of Jelutong” had long preceded him when I had the privilege of getting to know him as my roommate in Kawasan 6 of Kamunting detention camp during Operasi Lalang in 1988.

Sharing our lives in detention, I came to know the gentler side of Karpal, his infectious chuckles as he narrated stories of his legal cases and his colourful encounters.

At Kamunting, much of his time was taken up with preparing for his habeas corpus writs to the High Court in Ipoh, and later at the Supreme Court. There were few lawyers as emotionally and politically involved as Karpal, scrutinising every aspect, every angle, every word and the very syntax used to couch the framing of the Internal Security Act.

We were fortunate to have the benefit of his counsel and relevant legal documents, as we prepared our own applications for habeas corpus. I remember assisting him in typing his defence on an old manual typewriter.

If Karpal thought he already knew the ISA statute well from having defended so many ISA detainees before his detention, at Kamunting he got to know the law even better, inside out.

Karpal’s victory in his habeas corpus application before Justice Peh of the High Court in Ipoh on March 9, 1988, must stand on record as one of the most ironic of all ISA cases at a time when the government had plugged practically all the loopholes for an ISA detainee to be freed.

In this case, the home minister was forced to concede that one of his “allegations of fact” was an error, since on the occasion in question, Karpal was actually before the same judge and not, as alleged, making a “racially-charged” speech at a gathering. Justice Peh’s concluding remark was:

“Viewed objectively and not subjectively, the error in all the circumstances, would squarely amount to the detention order being made without care, caution and a proper sense of responsibility and that such circumstances had gone beyond a mere matter of form.”

Karpal’s indefatigable battles in the courts for successive habeas corpus writs are by now legendary. After that historic victory at the High Court in Ipoh, Karpal was rearrested nine hours later, on his way home to Penang.

I still remember his chuckle and the gleam in his eyes as he narrated the court scene that day: “You know, the crowd in court actually shouted ‘Long live Justice Peh!’ after he had read his judgment. Can you believe that?”

The Supreme Court later allowed the home minister’s appeal and set aside Justice Peh’s decision on July 19, 1988. It held that this “subjective satisfaction” of the minister is not subject to judicial review.

So Karpal remained with us at Kamunting until January 1989. We also had a good laugh when he told us his reply to the Advisory Board when they reviewed his detention. When asked to “show cause why he should not be detained further”, Karpal replied, in his manner, and with that fierce glint in his eyes:

“Can you explain to me why I am being unlawfully detained?”

Karpal’s detention at Kamunting was also ironic when he met another detainee at Kamunting whom he had, several years previously, helped to get off the death penalty.

The circumstances on which he argued his case, and the serendipitous turn of events in the face of obstacles that appeared insurmountable, will certainly make great reading for a compilation of his landmark legal cases.

This man was strong

Outside the tiger’s cage, Karpal used his astute legal mind to fight for truth, justice and democracy.

While lesser mortals are only brave in playing to the gallery, it did not matter to Karpal whether a misdemeanour had been committed by princes or politicians; if injustice or violations of democracy were committed by the ruling coalition or by the coalition or party to which he belonged – he would never flinch from raising his voice in condemnation of wrongs.

Throughout his illustrious career, some unforgettable episodes stand out vividly as exemplifying Karpal’s indomitable courage: He took former prime minister Dr Mahathir Mohamad to court for wrongful detention under Operation Lalang; he spoke out in Parliament against the excesses of the late Johor Sultan and a case involving the Pahang royalty; he sued then Tang di-Pertuan Agong (the late Johor Sultan) in 1986 on behalf of a businessman who had alleged that he had been brutally assaulted by the Agong.

Within the political coalition to which he belonged, Karpal was not afraid to criticise, or even chastise, the top leaders of Pakatan Rakyat for what he regarded as denigration of democratic principles: He has been the most consistent opponent of the introduction of hudud by one of the Pakatan partners, PAS.

It is truly ironic that he should leave us at a time when PAS is trying to introduce a private member’s Bill to introduce hudud in Kelantan, after his ringing quote that this will come about only “over my dead body”.

In 2009, he was the lone voice within the Pakatan leadership who spoke out against Anwar Ibrahim’s attempts to entice BN Members of Parliament to cross over to Pakatan, an unethical political practice that his party had been condemning for years.

Then, in 2012, he called on Pakatan to practice a “one candidate, one seat” policy, an undemocratic practice of the party elite monopolising federal and state seats that had existed for a long time in the Opposition.

I remarked, at that time, that Karpal was truly a lion among the lambs... the one time this tiger changed his stripes to become a lion!

In the end, after having failed to neuter the Tiger of Jelutong, the BN government has had to resort to an antiquated and grossly unjust colonial law, namely, the Sedition Act, to entrap him.

At the time of his unfortunate demise, Karpal was awaiting his appeal to the apex court. The best tribute to the Tiger of Jelutong is not any feudal pardon but the repeal of this legal relic of a past discredited colonial era. In any case, as Karpal would say, this is all academic – the Tiger of Jelutong has leapt into immortality, beyond the reach of amoral men…

It is fitting that we should anchor this tribute to Karpal with a Shakespearean quote by Mark Anthony:

“This was the noblest of them all…
His life was gentle, and the elements
So mixed in him that Nature might stand up
And say to all the world,
This was a man...”

Rest in peace, Karpal. It’s been good to have known you…Kua Kai Soong,mk

Students from St. Xavier's Institution gave a befitting farewell as the late YB Karpal Sing's cortege stop by at his alma matter.

YB Karpal Singh's cortege stopped at the Penang State Assembly as this was where he started his political career. 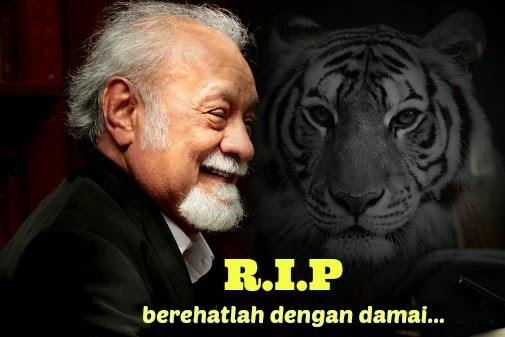