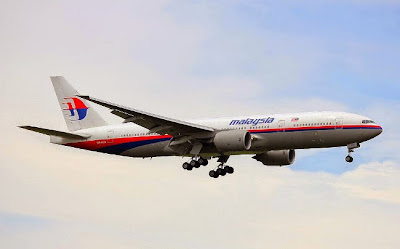 Fariq Abdul Hamid, the co-pilot of missing flight MH370, attempted to make a phone call from his mobile phone while the aircraft was flying over Penang, the New Straits Times reported today.

In an exclusive, the daily reported that Fariq's (pic) attempt ended abruptly as MH370 was flying away from the telecommunications tower.

This is the latest breakthrough in the ongoing criminal investigation as police traced the source of the call to Fariq's mobile phone.

The NST reported that the aircraft was flying at an altitude low enough for the nearest telecommunications tower to pick up Fariq's phone signal.

However, it has not been ascertained who he was attempting to call, as sources declined to divulge the information, the daily reported.

The daily also reported that Fariq's last communication was via the WhatsApp messenger application at 11.30pm on March 7, just before he boarded Malaysia Airlines flight MH370 for the journey to Beijing.

"Checks on Fariq's phone history showed that the last person he spoke to was one of his regular contacts (a number that frequently appears on his outgoing phone logs).

"This call was made no more than two hours before the flight took off at 12.41am from the Kuala Lumpur International Airport," the NST reported.

The daily quoted different sets of sources, one saying Fariq's phone showed the connection to the phone had been detached before the flight took off.

"This is usually the result of the mobile phone being turned off.

"At one point, however, when MH370 was airborne, between the Igari waypoint and the spot near Penang (just before the aircraft dropped off the radar), the line was reattached," the NST reported.

A reattachment did not necessarily mean that a call was made. It can also be the result of the phone being switched on again, according to the report.

Fariq's cousin Nursyafiqah Kamarudin, 18, told the NST that if there was one person Fariq would call before MH370 disappeared, it would be his mother, with whom Fariq, who turned 28 on April 1, was very close.

Although investigations have been ongoing since March 8, police have not cleared either the crew members or the passengers.

The NST quoted sources close to the probe as saying their findings had not been made public as they could disrupt their investigations.

"You have to ask NST's comments about that," he says at a press conference today, when asked to confirm the "exclusive" front-page report today that quoted unnamed sources. – tmi

MH370: No new signals detected as search narrows in on black box...

The search for missing Malaysia Airlines flight MH370 continues today with authorities confirming no further acoustic signals have been detected in the past 24 hours.

Yesterday, Prime Minister Tony Abbott said authorities were "very confident" that a series of signals picked up in the Indian Ocean were from the plane's black box.

But while he said the search area had been significantly narrowed to within "some kilometres", he warned the signals were starting to fade.

The search for the flight recorders is focused on an area, 1,670 kilometres north-west of Perth, where dozens of acoustic sonobuoys were dropped on Wednesday.

Today's search involves up to 10 planes and 14 ships and the Ocean Shield will continue scouring the area with its underwater pinger locator.

The so-called black box, which refers to two orange boxes that record flight data and cockpit chatter, may provide answers about what happened to the plane, which was carrying 227 passengers and 12 crew when it vanished on March 8.

The quick recovery of the flight recorders is critical as the batteries in the boxes have already reached the end of their 30-day expected life, meaning the underwater pulse they send out may fade or cease.- abc news

The inspector general of police (IGP) has been widely blasted for claiming the police are bound by both civil and syariah law when responding to the abduction of the child in S Deepa's custody case.

Yesterday IGP Khalid Abu Bakar said they were not investigating the case as "there are two court orders, one civil and syariah court" and that "both are binding".

"The Royal Malaysian Police (PDRM) has not set up a special squad yet to deal with syariah offences. So now the PDRM follows which orders, the civil or the syariah?"

Barathidasan said he was "truly shocked" by the IGP's statement.

"Would Khalid do the same if the (situation) was reversed andthe kidnap was by a Hindu mother?"

On Monday the High Court awarded Deepa custody of her two children, overruling a Syariah Court decision obtained last year by her ex-husband who had converted to Islam the same year

Justice Zabariah Mohd Yusof ruled this as her marriage to N Viran @ Izwan Abdullah was based on civil law.

Two days after her victory, her husband reportedly abducted their son and allegedly kicked her as she was trying to stop him driving away.

Meanwhile according to The Star today, two former law minister, Nazri Abdul Aziz and Zaid Ibrahim have also flayed the IGP for his statement.

Nazri pointed out that Deepa's marriage was a civil matter and that "the High Court judge’s ruling was correct".

"The police shouldn’t allow him to get away with kidnapping the child,” he was reported saying.

Meanwhile they quoted Zaid saying, “To say they (the police) respect both court orders and therefore will do nothing is irresponsible, and this leaves a negative perception of them." - mk