Karpal's son Ram Karpal and the driver were believed to be injured in the accident which occurred at 1.10am near 301.6km northbound marker along the the North-South Highway.

Malaysiakini learnt that Karpal and his son, who is also a lawyer, were heading north for a court case later today.

Photos taken at the scene of the accident - near Gua Tempurung
in Kampar - show the white Toyota Alphard badly damaged.

Contacted later, an Ipoh police spokesperson told Malaysiakini that it is believed the MPV collided with a lorry which switched lanes without indication.

Karpal's other son and Puchong MP Gobind Singh Deo (left) told The Star that his father had died on the spot.

"My brother Ram is slightly injured but we are trying to get through to him," he added when the daily contacted him at 3.30am.

According to a police statement later, Ram and driver of the ill-fated car, C Selvam, were not injured. However, Karpal's Indonesian maid suffered severe injuries and she is warded at Ipoh's Hospital Permaisuri Bainun.

The driver of the lorry, which was hit behind by Karpal's car, and its three passengers escaped without injury.

The police said the MPV carrying Karpal and four others hit the slow moving lorry at a hilly stretch of the highway.

The five-tonne lorry was carrying a load of cement, steel and mosaic tiles.

Karpal, 74, was involved in a previous car accident in 2005 where he was paralysed and wheelchair-bound.

The vocal politician graduated from University of Singapore and started his law practice before running for Parliament in 1978.

His long tenure as Jelutong MP and fiery speeches in the Dewan Rakyat earned him the moniker "Tiger of Jelutong".

Karpal had recently relinquished his post as DAP chairperson pending the disposal of his appeal against a sedition charge.

Last month, the High Court found him guilty of uttering seditious words against the Sultan of Perak at the height of the constitutional crisis in 2009.

"I have just landed at Ankara when I heard the news that YB Karpal Singh died in a road accident. My condolences to the family," read the premier's tweet.

Other netizens also expressed condolences and shock over Karpal's passing.


The bodies of the two deceased, Karpal and Michael, arrived at the Ipoh General Hospital at 7.20am.

They conveyed their condolences to Karpal's sons Gobind and Jagdeep. Karpal's wife was seen crying, while a relative tried to prevent photos from being taken. The bodies were sent for post-mortem.

Gobind said that the family expects the post-mortem to finish at 10.30am, after which they will bring the body back to their family home in Penang by 1pm.
He added that he was informed about the accident at 2.15am, and together with his wife, rushed to the scene. Gobind and his mother, Gurmit Kaur, managed to see Karpal's body.
The funeral for the veteran politician is expected to be either on Saturday evening or Sunday morning, he added.

"Mr Karpal has family and friends overseas and we are waiting for them to return for his funeral," he said.
"His body will be kept in our ‎family home along Jalan Utama (Penang)," he added.
Gobind said Ram, who sustained slight bruises, is well.

He also thanked all well-wishers for their support and requested the public to give the grieving family some privacy.
"We will be keeping everyone informed with regular updates," he added. - mk

An emotional and teary morning...

It was an emotional and teary morning at the Ipoh Hospital's Forensic Department as Bukit Gelugor MP Karpal Singh's body arrived for a post-mortem at 7.20am.

Karpal's body will be taken back to his family home in Penang today and he is expected to be cremated at the Sikh cremation hall on Jalan Gurdwara at 11am on Sunday.

Arriving with his body from Kampar, where Karpal together with his helper, Michael Cornelius, died on-the-spot in an accident near the Gopeng exit of the North-South Expressway, was his son, Puchong MP Gobind Singh Deo, who looked exhausted.

Though he appeared distraught as he himself had been admitted to hospital in Kuala Lumpur recently, Gobind  (on the left) was calm and collected as he took questions from the army of reporters who have come to the hospital from Kuala Lumpur, Ipoh and Penang.

Karpal's wife, Gurmit Kaur, was also in tears as she entered the waiting hall, wearing a purple scarf over her head, as relatives accompanied her into the Forensic Department's waiting area.

She was speechless but her pain was apparent as many approach her to offer condolences, as they hugged her and held her tight.

As one point, Lim was seen in tears as he hugged Gobind, offering his condolences, drawing tears from onlookers as well.

Since then, many supporters of the veteran lawyer and DAP, have gathered outside the building, which was only officially opened yesterday.

About 8.30am, Karpal's driver, C Selvam was seen approaching the building, sobbing loudly, as he was whisked away by several others.

A security guard, who happens to hail from Dato Keramat in Penang, where Jagdeep is the assemblyperson, said Karpal is the first person to be brought to the mortuary.

"We have not seen such a big man die here before. This is the first time we are seeing this. I knew about the incident at 5am and I am shocked as I know about the  political careers of Karpal and his son Jagdeep," the guard, who did not want to be named, told Malaysiakini.

Amid tears of sorrow, a coffin bearing Karpal Singh's remains was loaded onto a van for his final journey back to Penang today.

The 73-year-old, popularly known as the "Tiger of Jelutong", died early this morning after the Toyota Alphard he was in collided with a five-tonne Mitsubishi Canter. Karpal's remains had been brought to the Raja Permaisuri Bainun Hospital in Ipoh at 7.25am this morning for an autopsy.

Before the casket was taken out of the morgue, Karpal's wife and other family members were allowed in to view his remains. Besides the throng of photographers and reporters, there were many mourners who waited outside the mortuary to pay their last respects.

As the casket was carried towards the van, many people strained to touch Karpal's casket. The van departed from the Ipoh Hospital at 1.30pm accompanied by three police outriders and other vehicles bearing his family. The police outriders escorted the van until the toll plaza before returning to Ipoh.

It is understood that the funeral is expected to be held on Sunday at 11am so that relatives abroad have sufficient time to return to Malaysia to pay their respects. Karpal and his aide, Michael Cornelius Selvam Velly, 39, were killed in the accident which occurred about 1.10am near Gua Tempurung in Perak. Police said they both died at the scene.

Karpal's son, Ramkarpal, and their driver were slightly injured but their maid is said to be in critical condition. Police however said that the lorry driver, who was not injured in the accident, had traces of cannabis in his urine sample.- tmi 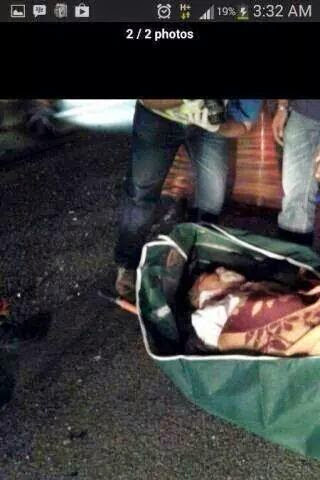 Karpal's body accompanied by family members being taken in an ambulance to the Raja Permaisuri Bainun Hospital in Ipoh.

The body of Karpal's assistant Michael Cornelius being wheeled out of the Kampar Hospital mortuary.

My deepest condolence to your family, RIP Tiger Of Jelutong...