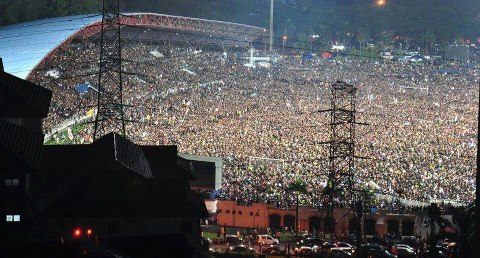 The nation's second highest court in a landmark decision today ruled Section 9(5) of the Peaceful Assembly Act 2012 (PAA), which punishes those who do not give 10 days' notice before holding an assembly, to be unconstitutional.

With this, the punishment where the organiser stands to face a fine of RM10,000 is null and void, ruled the Court of Appeal.

In a unanimous decision to strike out the charge against Selangor assembly deputy speaker Nik Nazmi Nik Ahmad, the three-member panel also declared as acquitted the PKR Youth chief aspirant, who was charged under the PAA.

Nik Nazmi was charged in relation to the Black 505 rally after the last general election in 2013.

The panel was led by Justice Mohd Ariff Mohd Yusof, who said there is nothing in the Act that allows the authorities to declare a peaceful assembly as illegal.

The others on the bench were former Malaysian Bar president Mah Weng Kwai and Hamid Sultan Abu Backer.

Justice Mah, in his written judgment, declared both Section 9 (1) that requires the 10 days' notice and Section 9, ( which is the punishment for notice not given), as unconstitutional.

However, Justice Ariff and Justice Hamid, in their separate judgments, declared that only Section 9(5) was unconstitutional.

“The Section 9(1) requirement of 10 days' notice under the PAA is constitutional, but Section 9(5) that punishes peaceful assembly is unconstitutional,” said Justice Ariff.

“The right to peaceful assembly is guaranteed under Article 10(1) (b) of the Federal Constitution and hence, it cannot be criminalised,” Justice Hamid said in his decision.

“There is no rational nexus of giving 10 days' notice with requirement of security, public order and others,.”

Justice Mah ruled that there are sufficient laws to punish offenders who violate or destroy property during a public gathering.

“If there are any problems arising from the assembly, it can be dealt with by other laws,” he said.

“Section 9(5) inconsistently penalises organisers while participants are able to assemble peacefully. Freedoms can only be reasonably restricted but not prohibited,” the judge added.

Surendran said never before in the country's 57 years of independence have the courts ruled and upheld the freedom of assembly.

He said the effect of the judgment was that it is illegal for the courts or authorities to impose punishment for not giving the 10 days' notice required by the Act.

“What it means is that it is not a requirement to inform, but the organiser or the people involved can choose to do so.”

“If there is damage to property, there are existing laws in the country to punish the offenders. This is certainly a landmark decision as the courts accepted our submission that Section 9(5) is unconstitutional,” Surandran added.

The judgment will have a telling effect on others facing  the similar charge under Section 9(1) nationwide, especially those who had been charged with organising sBlack 505 rallies in the other states.- mk

Khalid: Ooi has no power to demand my sacking...

Selangor Menteri Besar Abdul Khalid Ibrahim has brushed off DAP's Jelutong MP Jeff Ooi's call for him to be sacked over the water crisis, saying Ooi is powerless to make such a demand.

"I think Ooi does not have power (to demand my sacking)," Khalid told a press conference in Klang when asked to respond to Ooi's outburst on Facebook against him.

Asked whether Ooi's demand was justified, Khalid replied, "This is an issue of maturity and capability of a leader."

Khalid also declined to speculate whether Ooi's (left) open criticism was aimed at influencing his chances at the PKR party election where he is vying for the party deputy president's post.

"I don't want to link them (the two issues), if I do that it might end up with me slandering others instead," he said.

Khalid, who earlier personally met with village chiefs to hear out their problems in a meet-and-greet session, also dismissed claims that he was too occupied with such programmes instead of addressing the water crisis.

“Some people don’t understand management, what else can you do?

“You have to ask (instruct) your people to do it (water contingency plans), I use more than an hour to discuss about water.

“After that I have eight hours left (for other programmes),” he said.

Khalid also responded to PKR Wanita chief Zuraida Kamaruddin (right) who had declared she had a name that could replace the crisis-plagued menteri besar.

“I also have a name to replace YB Zuraida,” he laughingly shot back.

On his campaign in the PKR election, Khalid said he could only campaign during weekends or at night but has managed to cover almost all the states ahead of the May polls.

He added that he was satisfied about his level of support and chances in the election.- mk