The word 'Allah' can be used by Sabahan and Sarawakian Christians in their worship, including in the Malay-language bible al-Kitab, the government has said.

Minister in the Prime Minister's Department Joseph Kurup was reported by Sin Chew Daily as saying that this was decided by the cabinet in their meeting yesterday.

He said the cabinet decided to fall back on the 10-point solution, which allows for the importation into and printing of Bibles of any language in Malaysia, including al-Kitab which uses the word ‘Allah'.

"The cabinet has discussed the Court of Appeal decision because this issue has created much dissatisfaction and worry among Sabah and Sarawak Christians.

"They are worried if the Malay-language Bible that uses the word 'Allah' will be banned. Therefore the cabinet feels there is a need to clarify," he was quoted by Sin Chew as saying.

He added that the cabinet will also follow the case closely, due to the level of concern it has raised among the public.

Among others, the 10-point solution also states that there is no prohibition on Christians from carrying Bibles of any language from Sabah and Sarawak into the peninsula.

However, Bahasa Malaysia or Bahasa Indonesia Bibles brought into or printed in the peninsula must have the words 'Christian Publication' and a cross printed on its front cover.

The Court of Appeal on Monday overturned a High Court decision which allowed Catholic publication The Herald to use the word 'Allah' in its Malay-language edition.

The High Court decision in Dec 31, 2009 led to scattered attacks against Christian and Sikh places of worship.

The Herald is appealing the Court of Appeal decision at the Federal Court.-malaysiakini

The cabinet’s decision to stand by its 10-point solution shows that the Home Ministry’s ban on The Herald from using the word ‘Allah’ was merely to score brownie points with Muslims and not to protect the sanctity of Islam, says DAP secretary-general Lim Guan Eng.

“By permitting ‘Allah’ to be used in Sabah and Sarawak, this is a clear defensive electoral strategy designed to protect BN’s political interests there as there are fewer Malays and Muslims in both states.

He was responding to a statement by Minister in the Prime Minister’s Department Joseph Kurup, who reportedly said that the word ‘Allah’ can be used by Sabahan and Sarawakian Christians in their worship, including in the Malay-language Bible al-Kitab.

He said this is in accordance to the 10-point solution that allows the importation and printing of Bibles in any language, which includes the al-Kitab that uses the word ‘Allah’.

The decision follows a Court of Appeal ruling on Monday upholding the Home Ministry’s ban and overturning a 2009 High Court ruling that the ban is unconstitutional.

Lim said by allowing Christians in Sabah and Sarawak to use the word ‘Allah’ but not those in peninsula Malaysia, the only conclusion that can be made is that “BN is destroying religious harmony in Malaysia by irresponsibly and deviously exploiting Islam for selfish political gain by allowing the word ‘Allah’.” -malaysiakini

The government cannot simply decide that Sabah and Sarawak Christians are allowed to use the word 'Allah', since the Court of Appeal' has ruled that there is no basis for such use, a lawyer for the archbishop said today.

Annou Xavier (left), the counsel for Catholic Archbishop Murphy Pakiam on the matter, said this was evident in Justice Mohamed Apandi Ali's judgment that the word is "not integral" to the Christian faith.

“The Court of Appeal did not deal with The Herald or the Printing Presses and Publications Act, but was a very wide judgment that goes beyond The Herald.

“In his judgment, Justice Apandi said his ‘quick research’ found that the word 'Allah' is not part of the faith and practices of Christianity.

“So it is not for (ministers) Joseph Kurup or Wan Junaidi (Tuanku Jaafar) to say, 'It's okay, because that is the peninsula and has nothing to do with Sabah and Sarawak, or that this is The Herald and not about the al-Kitab,” Annou told Malaysiakini.

He also stressed that Justice Apandi headed the three-member bench, which delivered the unanimous decision on Monday.

He was responding to Kurup, a minister in the Prime Minister's Department who said the cabinet had decided that Sabah and Sarawak Christians can use the word 'Allah', and that the 10-point solution on the Malay language Bible al-Kitab stands.

In his judgment, Justice Apandi said: “In the Bible, God has always been known as ‘Yahweh’. That being the historical fact, it can be concluded the word ‘Allah’ is not an integral part of the faith and Christian practice, in particular that of the Roman Catholic Church.”

Disagreeing with Annou, Muslim Lawyers' Association of Malaysia (PPMM) president Zainul Rijal Abu Bakar said the judgment only referred to The Herald and was not a blanket ban of the use of the word 'Allah' by non-Muslims.

Zainul Rijal said the case was constrained to whether the home minister had acted legally when he prohibited the use of the word 'Allah' by The Herald.

As such, Zainul Rijal (left) said, when the bench found that the minister did not act illegally, it “simply means that the archbishop was prohibited from using the word ‘Allah’ in The Herald – The Catholic Weekly”.

“PPMM is of the view that the decision goes as far as prohibiting the archbishop from using the word 'Allah' in The Herald - the Catholic Weekly, a publication, and nothing beyond that,” he said.-malaysiakini 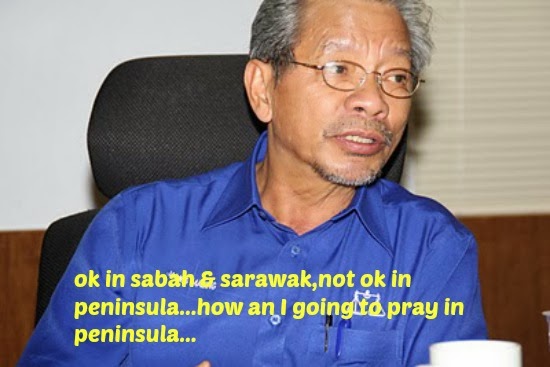 “Why do we have one country with two interpretations of the use of the word Allah?” Sarawak Land Development Minister Tan Sri Dr James Masing (pic) asked this when commenting on the Cabinet decision yesterday that the Court of Appeal ruling, which banned the word Allah in the Catholic weekly, Herald, does not apply to Sabah and Sarawak.

“I'm not comfortable with this interpretation. The assurance by the Cabinet that Sabah and Sarawak can use the word Allah in the Bahasa Malaysia or native language bibles, and other religious publications and in worship, but not in West Malaysia, is not satisfactory,”

Masing told The Malaysian Insider, adding that he still thinks that the court ruling is faulty. “It means one nation with two religious definitions of what is acceptable. I feel awkward."

Masing, who is the president of Parti Rakyat Sarawak (PRS), also said the assurance given by the Cabinet “looks like political expediency” and would create more problems than it would solve.

After the Allah decision, Putrajaya in futile bid to salvage Malaysia 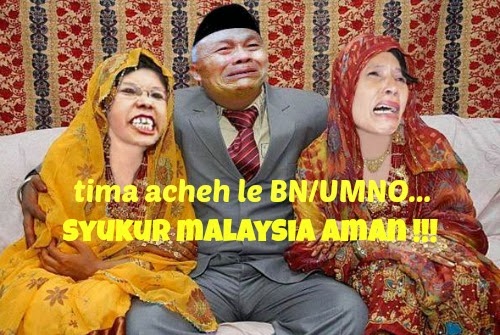