MP for Pandan Rafizi Ramli has upped the anti on Tourism Minister Nazri Aziz, who a day ago, had rather rudely called Rafizi a "stupid kid".

In a move that will separate the real men from the boys, Rafizi shrugged off Nazri's discourtesy and offered to meet him in a public debate or at a forum to thrash out the justification, pros and cons of the latest petrol and diesel price hike.

"With regards to the 'stupid' accusation, I am willing to learn from the minister, Nazri Aziz, either at a debate or a forum what are the reasons ad justifications for the Barisan Nasional government's decision to burden the people by hiking up petrol and diesel prices," Rafizi said in a statement sent to the press on Wednesday.

"I am confident that he can showcase his genius by coming face-to-face with me and allowing the people judge how smart he is."

Not known for his tact or finesse, Nazri had on Tuesday described a suggestion from Rafizi that Cabinet ministers pay for their own petrol as a "stupid idea".

"I want to rebut that stupid suggestion by (Rafizi). He is a stupid kid. He as accused me of being corrupt before, although I wasn't," Nazri had told a press conference on Wednesday.

"I want him to ask his menteri besar (Chief Minister) and exco members, the Penang chief minister and the menteri besar of Kelantan to pay for their own fuel as well."

This is not the first time that Nazri has been accused of putting his foot into his mouth.

Just over the weekend, he was reported as saying the Chinese in Malaysia were to blame for the May 13, 1969 racial riots, an accusation that has been hotly refuted by many in the country including the non-Chinese.

In fact, there are many who blame the racial riots on Nazri's Umno political party, accusing its leaders of triggering the violence so as to slap on Emergency laws and to cling to power. Nazri has since denied making such a comment and that he had only said "1 or 2 Chinese did it".

"Someone said the Chinese feel that they are being blamed for the riots. So I said the Chinese should not feel that way. Just because 1 or 2 Chinese did it years ago, does not mean that the whole race should be held responsible," said Nazri.

How Nazri will wriggle out from the latest debate challenge

Not surprisingly, Nazri's rather inadequate explanation has failed to soothe ruffled feathers.

Malaysians are now viewing with interest how Nazri will attempt to 'wriggle' out from the latest fiasco with Rafizi.

"My recommendations are sincere and well in line with the statement made by his own Cabinet colleagues such as Khairy Jamaluddin, who admitted his ministry is trying to reduce costs and increase savings," said Rafizi.

"One of the easiest ways to save public funds is to revoke special privileges on gasoline expenses now enjoyed by ministers, deputy ministers and their senior officials. This will teach them to be more careful in planning trips and programs.

"The issue (raised by Nazri) that such a measure (rejection of free patrol privileges) should be implemented first in the Pakatan states is irrelevant because people pay taxes to the federal government and not to the state governments.

"Nevertheless, I will write formally to the Chief Ministers in the Pakatan Rakyat opposition coalition and put forward measures to reduce gasoline expenses incurred by them in the course of their work."-malaysian chronicle

Rafizi is a nobody, there is no need for debate - Nazri


From midnight tonight, the retail price of RON97 petrol nationwide will be hiked by 15 sen per litre from RM2.70 per litre to RM2.85 per litre.

The price hike was confirmed by Perak Petroleum Dealers Association president Lee Chee Seng and is smaller than the 20 sen hike previously announced for diesel and RON95.

This is the first price hike for RON97 since March, when it was increased by 20 sen. In May, prices were however cut again by 20 sen after the 13th general election. Compared to a year ago, RON97 prices have been mostly lower as it peaked at RM3 a litre in September 2012.-malaysiakini 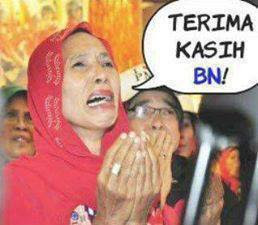