Living conditions at a national service (NS) camp in Balik Pulau were “worse than prison”, said trainees who packed their bags and held a demonstration at the camp gates over the matter yesterday.

They reportedly told parents that they were made to sleep on rusty, broken beds and mouldy, stained pillows over the past month, while bath facilities are also damaged, clogged and squalid.

The New Straits Times reported that one trainee told her brother that she was “traumatised” after finding a worm in her food at the White Resort NS Camp.

A photograph published by the daily showed that the trainees were served “poor quality food” consisting of what looked like a cup of rice and gravy, a small piece of unidentifiable meat, crackers and some sambal.

The Star reported that the trainees were served 125 grams of chicken meat but this has since ben reduced to a third.

According to an answer to Parliament in 2008, RM2.37 billion had been spent on the national service programme since it started in 2004, averaging just over RM500 million a year.

A group of National Service (NS) trainees from the White Resort camp here want to leave the programme over deplorable conditions such as insufficient food and broken toilet locks.

One of the trainees' brother, who declined to be named, said that he received a call from his sister on Tuesday night, asking him to pick her up from the camp.

"But, I was denied access after travelling all the way from Perak," he said. "I waited at the office for almost two hours, only to be told that I could not see her.

"She had told me that she could not stand the camp's unkempt condition. She even found worms in her food. It's a miracle no one came down with food poisoning," he said when met at the camp yesterday.

He added that his sister had also complained that some of the toilet doors were broken and could not be locked.

Reporters were not allowed to visit the camp's facilities and were instructed to wait at the office for more than two hours before being told to leave the site. 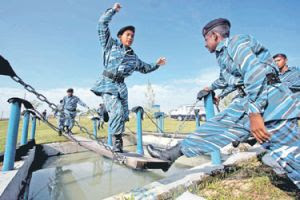 A source told The Star that the camp used to be one of the best NS sites in the country when it was opened about five years ago.

"It is now so badly maintained that it can be considered one of the worst in the country now," he said. "Clogged sinks and toilets are a daily occurrence here. Even the broken bed frames are not re­­placed."

The source said that the amount of food for trainees had also decreased, adding that in the past, each trainee had received around 125gm of chicken meat for their meal but this had been reduced by a third.

When approached, camp commander Mej Abdul Hamid Man refused to comment and said that the matter "will be dealt with internally".

"I'm very disappointed with the condition of the facilities and equipment in the camp, which are broken and dirty," he said in a statement.

"After seeing the condition of the resort myself, I understand why the trainees are dissatisfied." - news asiaone

Meanwhile, the National Service Training Department (PLKN) White Resort camp operator in Balik Pulau has been ordered to improve on the cleanliness of the area or face drastic action.

PLKN acting director-general Rozainor Ramli said this when visiting the campsite this afternoon.

“We have given the operator a week’s warning to improve on its cleanliness or else we will take serious action,” Rozainor said.

“We will not hesitate to close down the camp if they do not take care of its hygienic aspects within this period,” he added.

Rozainor said his department would not tolerate such a condition as the cleanness of the camp, including accommodation, was its top priority.

The camp operator would be informed verbally about the matter while a report would be filed soon on it, he added. - malaysiakini

The dirty and badly maintained court.

Some of the trainees were seen loitering around at the White Resort Camp.