A Samad Said is not perturbed by the urgings from certain quarters to strip him of the national laureate title.

On the contrary, the 81-year-old poet welcomed the move.

Taking it a step further, Samad said that he would not even care should the government revoke his citizenship.

"As far as the call to revoke my laureate title, I welcome that with open arms.

"In fact, I even welcome the revocation of my citizenship should they decide to do so," he told Malaysiakini.

Samad is currently being investigated for sedition for allegedly giving a speech at an event on the eve of Merdeka Day celebrations this year where the Sang Saka Malaya flag was flown.

He was arrested at his home at just past midnight of Sept 4 and held for questioning for two hours.

Police claim that this was necessary because he had “sneaked home” and did not heed earlier urgings to surrender, while The Malaysian Insider quoted Samad as saying that this was a police cover-up due the the public backlash against them for the late-night arrest.

Pak Samad, as he is fondly known, claimed that the was at his Bangsar home the whole day, aside from taking a walk and having tea at a nearby mamak shop. No police came to his home during that time.

Meanwhile, pressure groups such as Gagasan Pendidikan Melayu Malaysia, had reportedly urged that Samad be stripped of his national laureate title, according to Utusan Malaysia.

Another group, Perkasa said stern action should be taken against those who flew the Sang Saka Malaya because the move is an “affront to a national symbol as well as the country’s dignity”.

Bernama had quoted Culture and Multimedia Minister Ahmad Shabery Cheek as saying that it is up the panel that awarded Samad his title to decide whether it should be revoked, adding that his actions lower public perception of national laureates.

The furore surrounding Samad has apparently generated some concern amongst his peers.

“What is happening to the poet Samad Said? There is little news of him in Indonesia,” tweeted the prominent Indonesian writer Goenawan Mohamad. 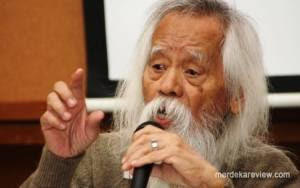 Police worked extra hard to track down Pak Samad,but too slow when...

The events of the past few days have revealed a positive side of our police force – they can be efficient, proficient, competent and resourceful if they want to be or choose to.

They must have worked extra hard to "track down" and detain national laureate Datuk A. Samad Said at his house at 12.30am for questioning and release him two hours later.

What offence did he commit?

He is supposed to have recited a poem when two others were hoisting an "unauthorised flag"?

The action against the duo was even speedier. Student activist Adam Adli Abd Halim and social activist Hishamuddin Rais, who were involved in the flag incident, were picked up in Kampung Baru and detained under the Sedition Act and Section 505 (b) of the Penal Code for allegedly conducing to public mischief. They have since been released on bail.

In early July, the police could have been branded as "super efficient" when they joined Home Ministry and Immigration Department officials when detaining those who screened a documentary in Kuala Lumpur on the last days of Sri Lanka's civil war.

Three organisers involved in the screening of No Fire Zone: In the Killing Fields of Sri Lanka at Selangor Chinese Assembly Hall were detained but no charges have been preferred to date.

There have been flashes of police brilliance at their best in isolated incidents involving those involved in expressing their views or demanding something, which in the eyes of police, is negative.

What happens when their own men are involved in a crime – something more serious, like snatching handbags and chains?

The story of "local hero" Saravanan Batumalai is fresh in our minds. He rammed his car into a motorcycle to prevent two thieves from escaping. They turned out to be policemen.


That incident happened on July 3 and Saravanan positively identified the duo when they were brought before him at the Kelana Jaya police station on the same day. A fortnight later, the police themselves conducted an identification parade where Saravanan picked out the same two men.

After theSun front-paged the report on Aug 27, an officer turned up at his home at midnight instructing him to attend a meeting in the morning with the police big-wigs at the state headquarters in Shah Alam.

The next morning, for over an hour, he was asked to give a run-down of the events. His "interview" was video-taped.

Today, 63 days after that incident and 44 days after the identification parade, the duo, supposedly working in Istana Negara, are walking around scot-free – off the hook and supposedly blameless.

No one would have known about Saravanan's heroics and his subsequent predicament if not for a senior golfer who brought it to our attention. The last we heard was that the Investigation Papers have been sent to the Attorney-General's Chambers.

But couldn't they have just served a notice on 78-year-old Pak Samad and ask him to turn up at the police station?

Why was the necessity to arrest him at that unearthly hour? He was no snatch thief, kidnapper or murderer.

If reciting a poem demands such drastic measures, what about snatch thieves in their midst?

What is wrong with screening a documentary for public viewing in a private hall? After all Killing Fields already has several hundred thousand hits on YouTube and was aired over Channel 4 in England.

Is it no sense of urgency, impartiality or the seriousness of the crime that takes precedence? Malaysians will make up their own minds and conclusions.

While the police are trying very hard to repair their tattered image and making bold attempts to change public perception, these contrasting incidents leave a bad taste in the mouths of ordinary citizens who want to see fairness in enforcement of the law.

Yes, the police need our support to combat crime but the manner in which they are conducting themselves is tantamount to shooting their own feet.-R. Nadeswaran, theSundaily