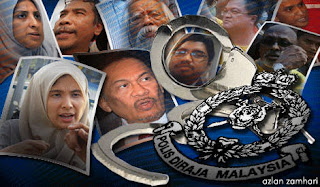 Police will apply for warrants of arrest for 13 individuals who took part in the various rallies in Kuala Lumpur on July 9.

Initially the list also included another individual - Titiwanga MP Dr Lo' Lo' Ghazali - but she had passed away on Sunday.

The sole Umno member on the list is Umno Youth exco member Reezal Merican Naina Merican, for allegedly failing to go to the Dang Wangi district police station to assist investigations into the various rallies.

Yesterday, the daily reported that the Kuala Lumpur police had submitted their report to police headquarters in Bukit Aman, which included the failure of the 13 individuals to assist in investigations and that police have applied for warrants of arrest to be issued.

Some of those on the list of 13 claimed they were not informed that they had to go to the Dang Wangi police station to have their statements recorded.