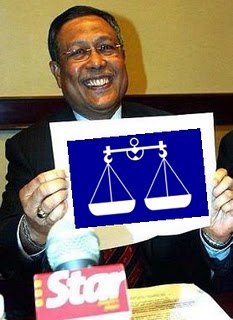 Besides tin production, apparently now the silver state is also becoming famous for centenarians as PKR has found 1,607 voters aged older than 100 years old registered in the state.

The issue was raised by PKR central leadership council member and Gopeng MP Lee Boon Chye yesterday at a press conference in Ipoh.

Together with PKR Youth vice-chief and Simpang Pulai state assemblyperson Chan Ming Kai, Lee furnished documents to back his claim. He quipped that the finding may make Perak the state with highest number of centenarians in the country.

According to data compiled from the electoral roll released by the Election Commission (EC), the oldest voter in the state is 132 years old and there are 160 voters older than 110. There are 1,447 voters aged between 100 and 109 years old, Lee said.

They urged the EC to investigate these voters and implement one of the eight demands of election reform coalition Bersih 2.0 - automatic registration of voters, which they claimed can eliminate the problem of dead voters being listed in the electoral roll.

“Automatic registration can save EC a lot of trouble so they can focus on other more important tasks,” Lee said. Chan added that the EC should verify the status of all 1,607 voters because only the commission has their complete addresses.

Apart from Perak, they also detected voters in Kuala Selangor, Kapar and Sibu who are aged 128, 123 and 131 years old respectively.

Lee was among those arrested last week for wearing a yellow T-shirt while at a market.