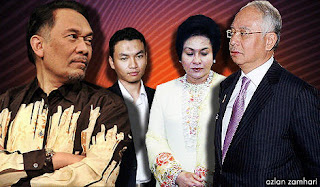 Anwar Ibrahim has filed an application to interview Prime Minister Najib Abdul Razak and his wife Rosmah Mansor before he takes his stand in his ongoing sodomy trial on August 8.

Anwar stated that under the law, the onus is on the prosecution to facilitate witness interviews by the defence and that the costs will be paid by the prosecution.

In a supporting affidavit, Anwar said that his counsel SN Nair had received a letter from the Brickfields Criminal Investigation Department, dated July 18, stating that Mohd Rodwan, Najib, Rosmah and Musa had declined to be interviewed but agreed to be defence witnesses on condition that a subpoena is issued against them.

Hasanuddin had also declined to be interviewed unless it is done with the presence of his counsel, Anwar said in the affidavit.

According to Bernama, Anwar also added that if all the witnesses failed to turn up to be interviewed by his counsels, that would mean he would be denied of his right to a fair trial.

Out of the 25 people the defence plans to interview, only five have been interviewed so far.

On May 16, Justice Mohamad Zabidin ordered Anwar to enter his defence after ruling that Anwar's former aide Mohd Saiful Bukhari Azlan, the complainant in the case, was a truthful and credible witness.

At the close of their case, the prosecution offered 71 witnesses, of whom the defence chose to interview 25.

Anwar pleaded not guilty at the Sessions Court on Aug 7, 2008, to committing carnal intercourse against the order of nature at Kondominium Desa Damansara in Bukit Damansara between 3.10pm and 4.30pm on June 26 the same year.