Najib cancels family holiday 'to be with rakyat' or because William Bourdon is in town... 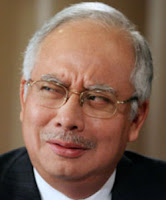 Prime Minister Najib Abdul Razak, who returned today from working visits to three countries, said he had cancelled a holiday with the family abroad to spend more time with the people in Malaysia. He said he was thankful to his wife Rosmah Mansor and their children for having agreed with him to come back earlier from overseas.

"I told my family I felt that I should return to Malaysia and that I was prepared to forgo the holiday for the sake of Malaysians back home," he said when addressing about 3,000 people who had gathered at the Bunga Raya Complex of the KL International Airport to greet him on his return.

Najib had been away on official visits to Turkmenistan, the United Kingdom and Italy. The prime minister was to spend a week in Italy with his family. 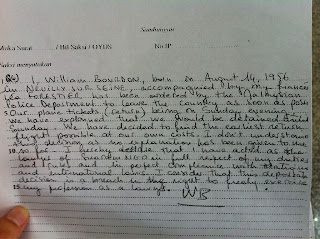 Meanwhile,French lawyer William Bourdon, who was in Penang last night to speak about the controversial Scorpene submarines deal allegedly involving millions of ringgit in kickbacks to Malaysian government officials, was detained at the KL International Airport this morning.

It is understood that he will put on a plane bound for Paris at about 11.30 tonight.

“Everything is okay. I am so sorry to leave my friends; we fly tonight for Paris. Keep in touch, take care and have courage,” said Bourdon in an email message.

According to Suaram director Cynthia Gabriel, immigration officials boarded the aircraft and detained Bourdon soon after their plane touched down at KLIA in Sepang this morning.

"He was immediately taken to the immigration holding centre at KLIA," Gabriel told Malaysiakini.

The immigration officers had initially disallowed Bourdon's wife Lia Foriester, also a lawyer, to accompany him to the holding centre. Following some negotiations, she was eventually allowed to do so.

According to Gabriel, the officers wanted to "question" Bourdon. Gabriel said Bourdon told her over the phone after four hours of detention that the deportation process was under way. Bourdon arrived yesterday but did not go through KLIA immigration as he was on transit to Penang.

The 55-year-old French lawyer was due to speak at a fund-raising dinner in Petaling Jaya tonight and at another dinner in Ipoh tomorrow.

Deporting Bourdon merely demonstrates that Najib fears what he is about to reveal. Kalau William Bourdon in rakyat Malaysia sure dah kena ISA....

It sounds like that it was the eind that blew the tear gas and water from the water-cannon into the hpospital. We are deceived by our own deception.