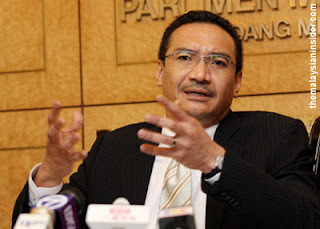 The Registrar of Societies has declared Bersih - or The Coalition for Clean and Fair Elections - an unlawful organisation effective from Friday, said ROS director-general Abdul Rahman Othman.

According to Abdul Rahman, Home Minister Hishammuddin Hussein had made the order under Section 5 of the Societies Act 1966.

In a statement out on Saturday, Abdul Rahman said Bersih had been creating unease and tension amongst the people. He accused Bersih of spreading pamphlets urging Malaysians to topple the BN government.

Afraid of the people, ban is unconstitutional and void

In an immediate reaction, Pakatan Rakyats leader slammed the order. "This shows how afraid BN is of the people," said PKR vice president Tian Chua. Unlike BN, Pakatan supports the rally and have been accused of hiding behind Bersih to further its political cause.

Bersih is actually an umbrella body of 62 NGOs, each registered in its own capacity.

According to human rights lawyer N Surendran, the ban was void and unconstitutional and Hisham had abused his powers. Surendran, also a PKR vice president demand the order be revoked immediately, and all who had been arrested for Bersih-related activities be released.

"We strongly condemn the act of the Home Minister in declaring Bersih unlawful under s.5 Societies Act 1966. How can a movement for fair elections be a threat to security? How can a peaceful assembly with a noble democratic purpose be a threat to public order?" Surendran said in a statement late on Saturday evening.

"The order made by the Minister is void and unconstitutional. S.5 Societies Act is in flagrant breach of Article 10(1)(c) of the Federal Constitution which guarantees the rakyat's freedom of association. The Minister also abused his powers in issuing the order as his motives were political and intended to stifle criticism against the BN govt. We demand that the order be revoked immediately and all those arrested in relation to Bersih be released at once."

Fears a people's uprising especially amongst the Malays

Bersih, an elections watchdog body, had planned to gather citizens in a march on July 9 to deliver a memorandum to the King, demanding the implementation of 8 electoral reforms before the next general election.

Prime Minister Najib Razak, however, fears the rally may spark a people's uprising against his BN coalition, especially amongst the Malays, the BN's traditional voter base. There is also speculation that he is unwilling to make any electoral changes as he believes BN may lose federal power if the free and fair elections were carried out.

This is not the first time that BN has resorted to outlawing a people's movement to cut down on political dissent. In 2008, it outlawed the Indian Hindraf movement and detained 5 of its leaders under the Internal Security Act, which allows for indefinite detention without trial.