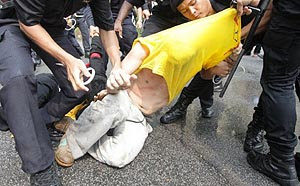 The most striking of these reports is footage from the TV news network Al Jazeerah which showed the men in blue kicking a marcher on the head after he had fallen to the ground. PAS deputy president Mohamed Sabu was also a casualty of the force's strong-arm methods when he fell off a motor-cycle on which he was riding pillion.

Sabu claimed the incident occurred when a police car rammed into the vehicle on which he was riding pillion and was headed to the KLCC. Sabu sustained an injury to his leg which left him limping which, however, did not deter him from attending the funeral this morning of PKR activist Badaruddin Ahmad, 58, who died in a melee at KL Sentral following the firing of tear gas at a big group of marchers who had assembled there yesterday.

Tan, a former Gerakan MP and BN deputy minister and chairman of the PKR disciplinary board claimed that the police fired tear gas horizontally rather than above the crowd and this, he said, was the cause of injuries to PAS MP for Shah Alam Khalid Samad, PKR supremo Anwar Ibrahim and to a bodyguard of Anwar whose cheek was shattered by the impact of a tear gas canister. 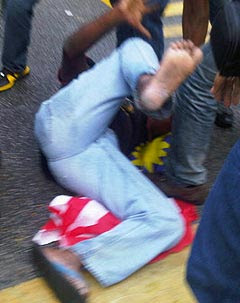 “Both Anwar and the bodyguard were injured because of this method of firing the tear gas and Khalid Samad sustained a wound to his head which required six stitches,” said Tan who is a medical doctor.

“Mat Sabu told me that he would be filing a case against the police for causing willful hurt to him,” said Tan.

The PKR leader also said Mohd Nizar Jamaluddin, whom he met at the Badaruddin's funeral, told him that the tear gas used to disperse the crowd at KL Sentral was stronger than the type used by police in Perak to disperse demonstrators in Ipoh in 2009 when there were incidents of unrest following the ouster of the Pakatan state government that year.

“Nizar is a veteran of several demonstrations and he said the type of tear gas used yesterday was of a stronger concoction,” said Tan.

The day I was tear-gassed by my government 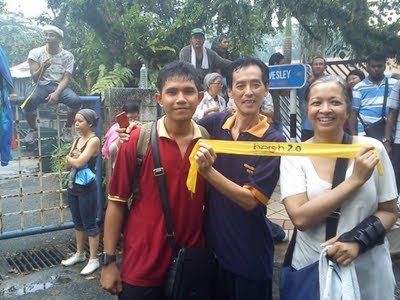 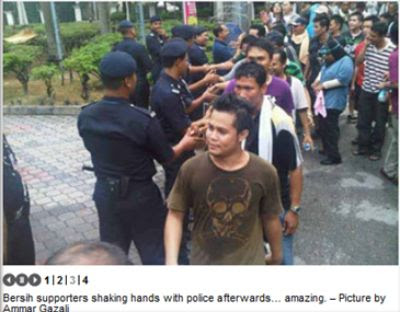 Who Finally Wins And Who Looses?