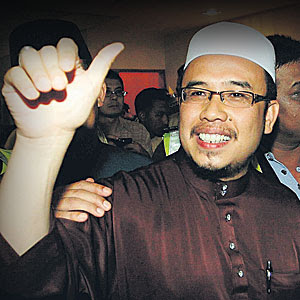 The National Security Council was today briefed on the dangers that former Perlis mufti Mohd Asri Zainul Abidin and several other religious figures posed for their links with Wahabism and terrorism.

A source disclosed today that the matter was discussed in a closed briefing attended by state muftis and representatives of Islamic religious departments from all over Malaysia.

Forty young 'Umno ulama' were also alleged to be on a 'watch list' of possible terror suspects, in the council briefing held this morning.

“The Saudi government was alleged to have been behind their activities,” the source told Malaysiakini.

As at press time, however, the claim has remained unsubstantiated as all attempts to reach the council, which comes under the Prime Minister's Department, failed.

According to the source, the governments of Kuwait and Bahrain were also accused of being behind the movement at the meeting which started at about 9.30am, Among those said to have addressed the council were southern Thailand religious leader Ismail Lutfi and popular religious preacher Muhammad Uthman El-Muhammady.

Contacted by Malaysiakini, a cynical Asri was not surprised by these allegations.

"Even those wearing yellow T-shirts can be accused of being communists," he jibed.

Unlike the pro-government, young 'Umno ulama', Asri is no stranger to being accused of links to terrorism in police anti-terror briefings.

However, he added that he is perplexed why the Umno ulamas, who were quite vocal in their defence of the ruling BN regime, received the same treatment.

"My advice to them is to think carefully before they want to serve the ruling government," he said.

Asri also questioned the veracity of the charges leveled against him as even the Inspector General of Police, Ismail Omar, often asked for his assistance on certain matters without any reservations.

"Just one week prior to Bersih 2.0, he called me to help calm the populace. Why would he contact a terrorist?" asked the Muslim scholar.

"Is the terrorist network this big?" he jested again. Commenting on the allegation that the Saudi government has been dragged into the matter, Asri worried that the matter may affect diplomatic relations between Malaysia and the middle east nation.

As for Wahabism, Asri said that in his view, the teachings of the sect which rejects plurality in religious interpretations, must be rejected in toto. However, at the same time, he also believed that Muslims must also reject anti-democratic regimes which denies the people's rights to free speech and assembly.

"Islamic scholars must consider this, undemocratic practices are also a threat to a multicultural country like Malaysia," said the Universiti Sains Malaysia lecturer.