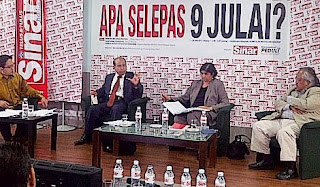 He was booed a number of times, forcing him to plead with the audience to give him a hearing in the event organised by Kumpulan Karangkraf, a media organisation which publishes Malay language daily Sinar Harian and a score of popular magazines.

Wan Ahmad also insisted that the EC is just a “management body” which does not have the enforcement powers to tackle the abuses raised by various quarters relating to the electoral system and processes.

He then kicked the ball to the Attorney-General's Chambers regarding amendments to the election laws, stressing that it is a natural advantage for the ruling government to decide on the laws to be passed and amended, and the EC has no say in this aspect.
“Anybody who wants to push reform which touches on the fundamental policy of the government must approach the right person.”

The moderator, Wan Saiful Wan Jan from think-tank Ideas, then asked whether Wan Ahmad is suggesting that the problem lies with the government and not the EC, followed by a round of cheering and applause from the audience.

Not answering the question specifically, Wan Ahmad replied that the current government, elected by a majority of the people, certainly have a stronger say in law amendment.

“If you are elected, you will do the same thing,” he answered to another round of boos.

“To push for reform, we need to work together, don't treat the EC as an enemy.”

'Don't treat the EC as an enemy'

In response, Ambiga rebutted that it was the EC that had adopted a hostile stand against the electoral reform coalition.

“I think you treat us as an enemy... It is wrong to say that 'we won't talk to you because the opposition is with you'... You sound like the government,” she said to the applause of the crowd.

She also lambasted the EC, which she claimed has been given a certain degree of enforcement power under the federal constitution, for not taking pro-active action in changing the laws.

Annoyed by the constant interruption from the floor, Wan Ahmad criticised them for refusing to open up their mind, being irrational, ignorant about election laws and even “sitting under the coconut shell”.

The audience responded by shouting “no power” almost every time Wan Ahmad spoke.

Wan Saiful had to repeatedly call for calm, but it was in vain.

“Let's stop the heckling,” he said, adding that the situation was turning into a rowdy “primary school” classroom.

However, Ambiga, at one point, commended Wan Ahmad's courage to face the critics.

“Wan Ahmad is a brave man sitting here. The whole EC should be here to back him but they only sent him,” she said, prompting the audience to give a round of applause to the EC's number two.

When quizzed that many people do not see EC as a credible institution, Wan Ahmad argued that the view is just limited to the audience in the forum but the majority of the people still trust the commission.

Ambiga herself, however, faced questions levelled at her over the rally on July 9 which took place, with at least two members of the audience demanding whether she would continue with her "confrontational" methods.

One challenged Ambiga "from lawyer to lawyer" on her leadership role on July and whether she would organise more "illegal rallies".

A third questioned the Bersih 2.0 chief over the prominent space taken up by opposition party leaders in her civil society-led coalition.

At one point, moderator Wan Saiful, called for calm.

"Let's stop the heckling," he said, adding that the situation was turning into rowdy "primary school" classroom.

During the forum, a commotion broke out when a Malay lawyer, while criticising Bersih 2.0's decision to call an illegal rally, made a remark that “the Malays have accepted the Chinese and Indians as citizens”. The remark angered a few Indians who stood up and shouted at the lawyer. However, the situation calmed down soon after the ushers interfered. 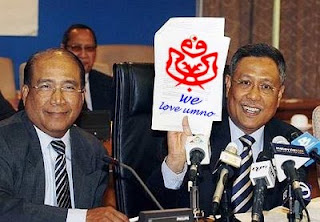 The organiser ended the forum 15 minutes earlier than planned, saying that it was due to the order of a “higher authority”.

Many speculated that the order came from the police, who had been monitoring the forum, but the organiser later clarified that it was due to praying time and the “higher authority” referred to was God.

Before the commencement of the forum, police were guarding the entrance and banners that read "T-shirts with Bersih and Patriot logos are prohibited" were put up.