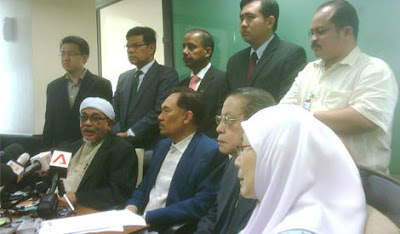 Top leaders in PAS and DAP have given their full support to PKR de facto leader Anwar Ibrahim, also rejecting the sex video that emerged yesterday.PAS president Abdul Hadi Awang described the allegation as a “dirty tactic” that only serves to confuse the public into believing the claim that Anwar is immoral. Abdul Hadi stressed that there are too many factors to consider, which ultimately raise questions about the credibility of the individuals behind the video screening.

“Who is the cameraman? What about the equipment, the real actor, the editor? Do they have characteristics of being stupid or liars?” he asked after a Pakatan Rakyat meeting at the Opposition Leader's office at Parliament's tower block.

“In Islam, accusations of (im)morality are rejected if there is confusion, hence the need for four witnesses who are fair and cautious (berhemah),” he said.

“There is still confusion (about the authenticity of the video), and this undignified act (of screening it) will only lead to a breakdown in society.”

DAP advisor Lim Kit Siang called on all Malaysians to express their “outrage and condemn” the new allegation against Anwar, saying it only shows that politics have reached “new depths of character assassination”.

Echoing Hadi's position, Lim said it is highly questionable as to why the screening was timed to coincide with the dissolution of the Sarawak state assembly, and also queried the elaborate and secretive way the screening was arranged.

“This issue is politically motivated against Pakatan and also because of the coming Sarawak elections. It shows BN is worried because the outcome of the state elections will have a great impact on the general election,” he said. Lim noted that it is clear the individuals or group behind the screening are hoping to sway public opinion in Sarawak against Pakatan.

“Those behind this latest ploy hope to get dividends in Sarawak. This is a test of all Malaysians not to be influenced by such dirty tactics and we hope the Sarawak elections can take Malaysia to new heights,” he said. 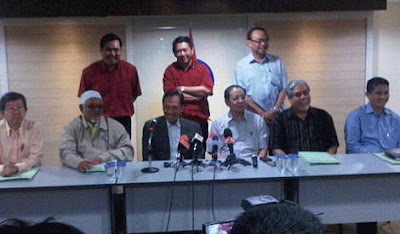 'Why should Anwar swear innocence?'

Responding to a question, Abdul Hadi brushed aside a suggestion that Anwar could swear that he is innocent, stressing that the entire issue is not worthy of being qualified by Islam. He said the only body that can ask Anwar (right) to swear his innocence is the Syariah Court, and not the media or any other body.

PKR deputy president Azmin Ali appeared surprised when asked if he had heard of any offers to Pakatan MPs and leaders, especially those close to Anwar, to view the video. He said he even went around asking fellow Pakatan MPs if they had seen the video, and they all replied in the negative.

"Maybe they made the offer to MPs who are attending Parliament. I'm suspended, so I guess maybe I'm not included," he quipped, adding that the latest rumour he has heard is that the video is being handed out to Umno-linked bloggers.

Yesterday morning, a group of selected media representatives were invited to an elaborately arranged private screening of the sex video, which purportedly showed Anwar having sex with a prostitute in a hotel in Kuala Lumpur.

At a press conference late in the evening, Anwar denied he is the man in the video, saying he was with his family and staff at the time the video was said to be recorded.