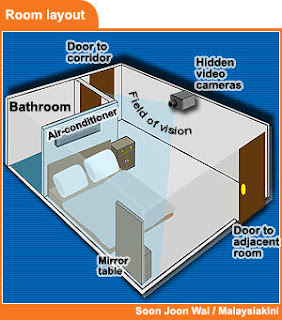 For the second time in about four years, the country is abuzz over a sex tape allegedly depicting a prominent politician. This time round, the unveiling of the video was shrouded in mystery. It was revealed to only a select group of news organisations at a posh hotel in Kuala Lumpur.

While the majority of journalists who viewed the video are almost certain of the identity of the politician, many questions remain.

The person who organised the screening only wants to be identified as 'Datuk T' and he was very cautious about revealing anything more about himself. However, it is certain that Datuk T had meticulously planned the event today and had booked a room at the posh Carcosa Seri Negara costing RM1,350 to hold the screening. He was always accompanied by two bodyguards and refused to reveal anything when approached, just sticking to the points raised in a written statement given to the press. Neither did Datuk T reveal anything about his relationship with the politician depicted in the video.

He claimed the politician was at a hotel where the tryst took place on Feb 21 and lost his luxury watch in the hotel room. "I was asked to search for the watch in the room," said Datuk T in the statement, without revealing when the search took place, who ordered the search and why he was there. Datuk T said he found the video recording equipment in the room during the search and wants the politician and his wife to quit politics because there is evidence that immoral acts were committed.

He refused to provide his contact details and instead collected business cards from reporters present, promising to contact them in the future with updates.

Where did it happen?

The small hotel room was depicted in the video appeared to be on the lower end of the scale. An air-conditioning unit could clearly be seen, when even a three-star hotel would be equipped with central air-conditioning. There are doubts as to whether the seasoned opposition leader depicted in the video would settle for a less distinguished establishment where security is slack.

When did it happen?

The time-stamp on the video clip begins at 10.23pm and ends at 10.45pm on Feb 21, 2011. The alleged politician is understood to have attended a full-day function on that day. Questions are being raised as to whether he was still "capable" or "energetic" enough for a late-night romp. Based on what was depicted in the video, the politician was very vigorous at the tail-end of the act.

Could the politician really pull it off?

There are also questions on whether the politician, who is known for having back problems, was physically fit to perform the act in multiple positions. Towards the tail-end of the act, the couple changed positions, with the woman lying on her back while the politician performed sexual intercourse facing her while kneeling and straddling.

"The person depicted in the video doesn't look like he has a back problem," said the Malaysiakini journalist who was at the video screening today.

Why isn't it made public?

If the purpose of the video is to embarrass the said politician, it would be strange that the video has not been made available to the general public, as in the case of Dr Chua Soi Lek back in December 2007. Now, the public, the media and experts have no opportunity to scrutinise the veracity of the video and merely have to rely on accounts from journalists.

Why was it announced now?

One of the most anticipated events today was formal announcement of the Sarawak state legislative assembly being dissolved. However, this event has been overshadowed by video clip. There is little doubt that the controlled screening of the video was meticulously timed ahead of the Sarawak polls, in which the opposition aims to mount its most serious effort in history to challenge BN there.

Given that the alleged act took place on Feb 21, the video could have been released earlier.- Andrew Ong