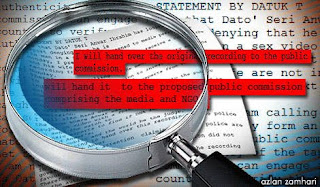 An email, purportedly written by 'Datuk T', is being circulated among journalists stating that the sex clip said to depict PKR de facto leader Anwar Ibrahim will not be handed to the police.

Instead, he is prepared to hand over the video to be scrutinised by a “public commission” comprising media practitioners and NGOs. 'Datuk T' said this decision was made after Anwar lodged a police report this morning denying he was the one in the sex video clip.

Explaining his decision, 'Datuk T' said if the clip was handed to the police, Anwar would claim that the authorities were conspiring against him, if the outcome of investigations was unfavourable. “Therefore, I have decided not to hand over the recording to the authorities. I will hand it to the proposed public commission comprising the media and NGOs,” reads the email.

“I presume that he and his wife are not interested to receive a copy of the recording from me next Monday. “Therefore, I am calling on the media fraternity and NGOs to immediately form an independent public commission to investigate the authenticity of the tape. "The commission can engage forensic experts from whichever country to verify the authenticity of the recording.”

Watch to be handed over

He said he would also hand over the Omega wrist watch, purportedly owned by the politician and said to have been left in the room where the video clip was recorded. “The commission can send the watch to forensic experts to find out if DNA found on the watch matches Anwar's,” he said. The authenticity of the email could not be independently verified.

It is believed that it was distributed to the press by a senior journalist from a English language daily several hours after Anwar lodged a police report. The subject of the orginal email reads: 'pls send top alternative media, bh, utusan dah dapat' (Please send this letter to top alternative media organisations. Berita Harian and Utusan Malaysia have received it).

Yesterday, a 'Datuk T' had organised a tightly-controlled screening of the sex video at the Carcosa Seri Negara hotel in Kuala Lumpur. He refused to identify himself or allow himself to be photographed. He would not divulge his contact details, instead collecting the details of journalists and editors who attended the screening. A statement signed by 'The Insider' - and distributed to the media yesterday - said the video clip was shown because Anwar has lost his moral standing.

The statement said a copy of the tape would be sent to Anwar and PKR president Dr Wan Azizah Wan Ismail in seven days and they would then have seven more days to quit politics. Anwar called a press conference yesterday and denied the allegation.

Dont hide behind Bik Mama's sarong, come out and expose your identity....