UMNO has 'bonsified' the Malay mind..... 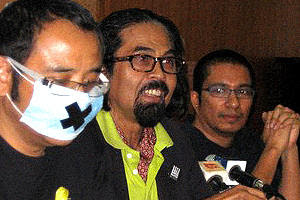 Renegade artist Hishamuddin Rais declared that the Malay mind has been "bonsified" (shrunk and distorted, like a bonsai plant) by Umno's political agenda in order to perpetuate the culture of fear against non-Malays. The former ISA detainee said that it is typical of Umno to play on racial fears to convince the public that they are the best option for Malays to remain at the forefront of social and economic development in Malaysia.

"This process that 'bonsifies', nullifies and stupefies (Malays) goes back to the British time. (Malays) are led by lazy leaders and lazy thinkers," Hishamuddin (middle in photo) said at the 'Malays are muted too!' forum at the KL and Selangor Chinese Assembly Hall last night. The controversial activist noted that Malays have been indoctrinated to fear new ideas and 'ghosts' of Chinese supremacy, to the point that the Malay public believe that the 'ghosts' are real threats to their existence.

Taking the example of bomoh or witchdoctors, Hishamuddin claimed that Umno employs the same tactics to convince the Malays that they are constantly battling against hantu (ghosts).

"In Malaysia it is very simple. The hantu for the Malays are the Chinese. The Malays are made to believe that there are all sorts of hantu, to encourage the public to be thankful for Umno (to save them).

"It's just like (the tactics of) the bomoh in the kampung, where kampung folk will be told that there are all sorts of hantu to deal with... Umno uses the same modus operandi," he said.

Hishamuddin noted that such fear of losing power has only taken hold fairly recently, evident especially in the ruling government's efforts to perpetuate the fear of a recurrence of the May 13, 1969 racial riots.

"They put the fear in Malays that the Chinese wanted to take over the country. I thought that (notion) was mad, because this is the most mismanaged country, with corruption in the police and the judiciary.

"Because the country is so mismanaged, do you really think the Chinese want to take over the country?" he quipped.

Speaking to an audience of around 160 people, Hishamuddin stressed that the ruling government is simply working on the premise of "manufactured consent"', where it employs public institutions such as the Malayan Sultanate to force people to agree with whatever opinions or policies it makes. He said that it has perpetuated the culture of 'lazy thinkers' among Malays, where the best minds end up being unwilling or unable to contribute to the community's advancement.

Hishamuddin stressed that it is unfortunate that the best Malay minds have been left out of the nation's education system, to make way for 'half-educated' Malays who are bent on maintaining the status quo.

"Malays have become very lazy thinkers. To the non-Malays, I ask that you have sympathy as the Malays are faced with a situation where their reading material is very limited and (the government) allows less and less people (to form their own opinions)," he said.

Taking the example of the recent banning of comics by cartoonist Zulkiflee Anwar Ulhaque, better known as Zunar, Hishamuddin said it is ridiculous that public expression, particularly by Malay artists, should be censored.

"Just imagine, just to laugh you need to get a licence... and if you want a licence you will have to engage in corruption to pay the Marxists," he said.

ya..i really hope there will be the more influx of our own malaysian "young turks" to liberalise malay mindset. but still, by saying liberalization.. i do mean it needs relevant guideline and intermittent approach instead of radical change