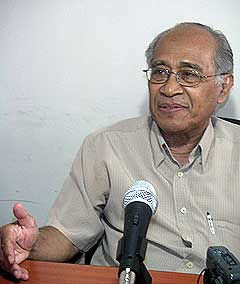 The decision by the veteran politician to quit as party's No 2 will pave the way for a much anticipated contest between two rivals - vice-president Azmin Ali and supreme council member Zaid Ibrahim.

Speaking at a press conference in a hotel in Petaling Jaya this morning, Syed Husin said that he made the decision not to contest after consulting party leaders, family and friends. He will nevertheless continue to remain active in politics.

"I'll be 74 years old next week. I hope I can spend more time on writing and keep company with my wife, children and grandchildren.

"I don't think I'm that old yet, but I want to make way for young blood," he said.

Syed Husin denied he was hard pressed to withdraw from the polls after a group of PKR MPs and state assemblypersons came out openly last week to support Azmin for the no 2 spot.

"No, I'm not under pressure. If I'm under pressure, it's my moral duty to inform the party. A lot of people have been asking me, so it's only fair that I make my announcement before they start nominations on Sept 17. 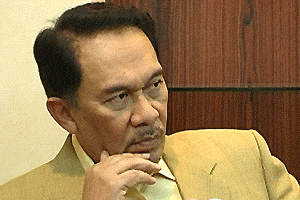 Meanwhile, Anwar Ibrahim said he will not accept any nominations for the upcoming party polls amidst a groundswell of support for him to officially take the helm of the party.

Anwar has also been endorsed for the top post by outgoing deputy president Syed Husin Ali, Selangor Menteri Besar Khalid Ibrahim and a group known as the Majlis Muafakat Kepimpinan Keadilan Selangor (Selangor Keadilan Leadership Consensus Council). Also in his blog, Anwar had words of advice for all aspiring candidates, reminding them to ensure that a clean contest and campaign takes place.

“All candidates must strictly follow campaign ethics and not claim they have my endorsement,” he said. He said that the party was making history with its one-member-one-vote direct elections for the party top leadership and thus the party members must ensure that the party's ideals for reforms be carried out.

“We must take heed of this principle and not external demands or gratuity,” he said.

This is very fine web site, thank you and look at that [url=http;//ciufcia.pl]gry dla dzieci[/url]