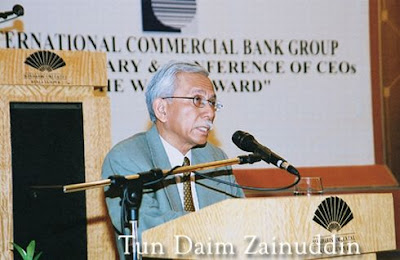 If there’s an award for the best dressed wolf in sheep’s skin, you can be sure of only one winner – Tun Daim Zainuddin. The former finance minister is perhaps the politician former Prime Minister Mahathir least has to worry simply because Daim was not an ambitious politician. Daim loves money and young women more than anything else and this includes power that comes with the position as Finance Minister. And Mahathir was freaking comfortable with such person. Furthermore Mahathir and Daim were intimate friends from the same village in Alor Setar. Daim was so influential during Mahathir’s administration that Musa Hitam, Deputy Prime Minister, couldn’t get Mahathir’s attention when Musa commented about Daim’s dealings in awarding huge projects to his cronies such as Tajuddin Ramli, Halim Saad, Wan Azmi, Samsuddin Hassan, Rashid Hussain, Amin Shah and others.

Daim, the Mr Moneybags of UMNO, can easily become the richest man in Malaysia if his wealth is openly declared. During his day as the Finance Minister, Daim persuaded Mahathir for absolute power in running the Economic Planning Unit and the nation’s Treasury. In short projects were awarded directly to “preferred” companies aka cronies. As Finance Minister, Daim practically ordered banks to lend money to any companies he desired. Daim and his cronies also profited tremendously from shares allocated from company listing (IPO) on the Kuala Lumpur Stock Exchange.

At one time Daim Zainuddin was so powerful (and greedy) that his boss, Mahathir, was speechless when confronted by not only Chairman of Japan’s banks but also former Britain’s Prime Minister Margaret Thatcher that Daim Zainuddin’s demand on the quantum of commissions was simply outrages. Daim was so influential politically and monetary that he can influence the ups and downs of the local stock exchange. Eventually Mahathir had to relieve Daim Zainuddin of his position lest the PM wish the whole world to know about the irregularities.

Of course Daim Zainuddin was linked to many scandals over his journey in wealth accumulation. Daim was allegedly illegally acquired 40.7% of UMBC in 1984 while he was already Finance Minister. He also owned substantial stake via nominees in previously Development & Commercial Bank, Rashid Hussain Berhad, Bank of Commerce, United Asian Bank, Southern Bank, and Ban Hin Lee Bank before their mergers in the 1990s when he was still Finance Minister. Daim’s name is also linked in the RM8 billion controversial electrified double-tracking railway project spanning from Gemas to Johor Baru. It seems CREC (China Railways Engineering Corp.), a Chinese company that has Daim Zainuddin’s finger-prints and was awarded the Letter of Intent, is fighting tooth and nail with Najib’s administration because the PM wanted the project to be awarded to another company. Najib’s crony and golf buddy Tan Kay Hock was allegedly asking RM500 million commission of which RM200 million was for Najib’s family.

One of his cronies, Tajuddin Ramli, recently created havoc when he exposed that it was former prime minister Dr. Mahathir Mohamad and former finance minister Tun Daim Zainuddin who instructed him to buy shares in Malaysia Airline System (KLSE: MAS, stock-code 3786) to help Bank Negara (Central Bank) recover from foreign exchange losses in 1994. And now another (Daim) crony tycoon Halim Saad who was bailed out in the 1997/1998 Asia financial crisis is making headlines in the local stock market.

Halim Saad controlled now defunct Renong Group which in turns owned PLUS and UEM Group Berhad. Both PLUS and UEM are now owned by Khazanah. It was reported that Halim and Daim are the man behind Asas Serba, a company which proposed to tale over 25 toll expressways in the Peninsular Malaysia. Asas Serba has offered 20% cut in toll rates in its RM50 billion bid for the acquisition as a carrot to lure the ruling government to accept the proposal. Politically this is attractive since the government could cheer the voters while the government could save RM114 billion (from 2010 until 2038) in a lopsided agreement that allows the concessionaires to raise toll rates every 3-years. 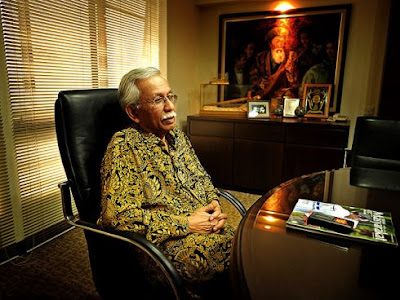 The contender was from Syed Mokhtar Albukhary, one of Najib’s many cronies, who is offering RM45 billion to take over all assets of highway concessions with a 10% toll reduction across the board. The proposal also includes a promise not to increase toll rates in the remaining years of the concession. The whispers on the street were that Syed Mokhtar is already monopolize the nation’s sugar (that’s right, Robert Kuok no longer the Sugar King) and rice industry so should the same person be crowned the Highway King as well?

However out of all the concessions, the biggest is PLUS Expressway Berhad (KLSE: PLUS: stock-code 5052) which is also the only toll operator owned by the government. But there’re more questions than the excitements about the PLUS possible acquisitions:

1. Why is the government rushing to cash-out their “cash-cow”? Does the de-facto ruling government somehow know they would lose in the next general election?

2. Isn’t RM50 billion too costly a price to pay, not to mention difficulty in finding that amount of funds? 3. Will other highway operators willing to sell their respective cash-cows? 4. Is RM50 billion sufficient to acquire all the 25 expressways considering the bidders need to pay attractive premiums in order for the concessionaires (especially PLUS and Litrak) to let go of their goose that is laying golden eggs? 5. If history were to repeat itself, will Santa Claus Halim Saad (or Syed Mokhtar) need another bailout at a later stage considering they do not have expertise in highway maintenance? 6. If Asas Serba can offer 20% cut in toll rate and still able to make profit, why can’t the ruling government do the same?

A low-profile Daim Zainuddin who is known to be a great tactician does not seems to be bother about funding. After all he owns Swiss-based ICB (International Commercial Bank) Group via Daim Limited’s 61.3% stake and if he desires he just need to pull his political connection strings to secure the funds. Daim plans his moves silently and with great care. Nobody should be surprise if he has the backing of Mahathir to return to the corporate scene. And does the return of Daim Zainuddin from overseas means the alleged RM3 billion cash in RM500 and RM1000 notes siphoned out to Indonesia has been successfully brought back and converted into “usable money” ready to be used?