Anwar: Case shows I have no interests in MRCB...... 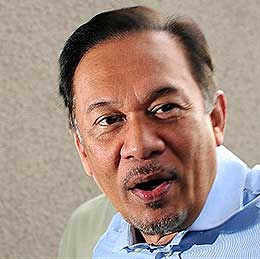 Opposition leader Anwar Ibrahim said today's revelation at the Kuala Lumpur High Court on the commercial suit by Khalid Ahmad on Abdul Rahman Maidin has absolved him of any interests in Malaysian Resources Corporation Bhd (MRCB).

Anwar, in his blog posting today, said Umno had been making claims that he has interests in MRCB through Realmild (M) Sdn Bhd.

“I have said at the Kuala Lumpur High Court in 1999, that the 70 percent stake in Realmild was held by former premier Dr Mahathir Mohamad himself. I do not have any interests in the company.

“Following the revelation, Mahathir had asked Abdul Rahman to take over the (Realmild) shares, which were then said to be owned by Umno. This only verifies my earlier assertions,” he said.

Anwar said he was thankful to Allah that the slander against him that plagued the minds of the people is now out in the open.

Today, Rahman, the former MRCB chairperson, testified that he had paid RM40 million for the 100 percent stake in Realmild, only to discover from Dr Mahathir later that the shares belonged to Umno.

Rahman said former finance minister Daim Zainuddin had offered him to take over Realmild some time in 1999, and he thought it was merely a pure corporate exercise.

However, he said he was shocked to learn from the then-premier that the shares belonged to Umno and that no payment will be made to him when he had to relinquish them to Syed Anuar Jamalullail, who is the younger brother to the Raja of Perlis.