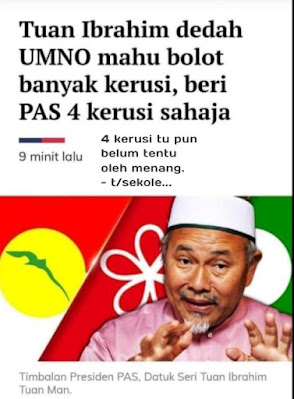 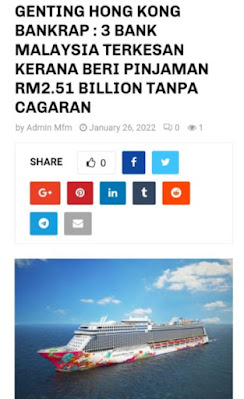 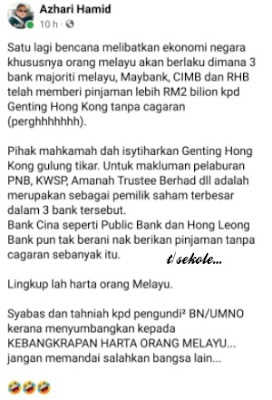 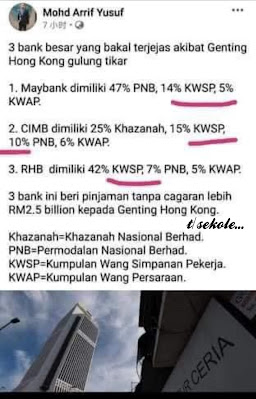 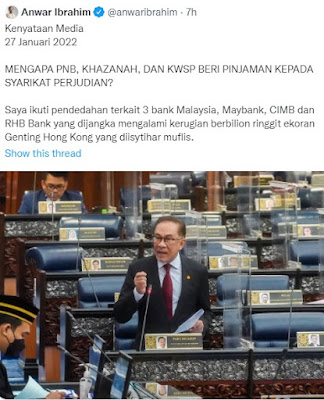 Dah bankrap!!! Hutang tanpa
cagaran bagaimana pula?
Finance minister Tengku Zafrul Aziz should explain how failed Genting Hong Kong got RM2.5 billion in unsecured loans from three local banks, opposition leader Anwar Ibrahim said today.
The cruise operator filed for bankruptcy earlier this month, and Singapore’s Straits Times reported on Sunday that Maybank, CIMB and RHB Bank were among some of the company’s chief unsecured creditors, with a combined exposure of US$600 million (RM2.5 billion).
“I urge the finance minister to immediately answer why these banks were allowed to give Genting Hong Kong unsecured loans?” Anwar said in a Facebook post.
“The government, through Permodalan Nasional Berhad (PNB), Khazanah, and the Employees’ Provident Fund (EPF), are the largest shareholders of these three banks.
“How could this gambling company get an unsecured loan so easily?” - fmt 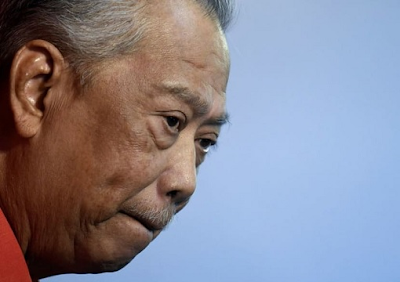 Muhyiddin cowardly runs away from Johor election –
Bersatu could disintegrate before GE15...
Muhyiddin appears not only trapped by his past acts of treachery and betrayal, but also humiliated by his big mouth when he decided not to defend his Gambir seat in the upcoming Johor state election. As the president of Bersatu (PPBM) or Malaysian United Indigenous Party, the former prime minister’s stunning decision will demoralize his own party for obvious reason.
In fact, it’s a “kemaluan besar” that the ex-backdoor premier, born as Mahiaddin Yasin, is running away from contesting in his own stronghold. He should at least show that he is a braver “Bugis Warrior” than his bitter nemesis ex-PM Najib Razak. Exactly what type of leader is Mahiaddin when he chickened out from defending his seat in the same state he was born?
After days of struggling, Muhyiddin has finally cooked up a half-baked excuse not to defend Gambir (the seat that he won in Malaysia’s 14th General Election in 2018) for fear of suffering a humiliating loss. He conveniently claimed his refusal to contest would enable him to fully focus on matters at the parliamentary and federal levels, as well as to manage party affairs.
If his justification has an ounce of truth to begin with, how could be manage to focus on the state seat during his short 17-month as the prime minister then? Not only was Muhyiddin born in Johor, he is also a Member of Parliament for the Johor constituency of Pagoh, not to mention he was Chief Minister of the state from 1986 to 1995. Crucially, he is also Johor Bersatu chairman.
Was it not Muhyiddin, who bragged that he could easily bring down the Johor UMNO state government if he decides to “press a button” in retaliation to UMNO veteran Shahrir Abdul Samad’s challenge to Bersatu to withdraw support for the Johor UMNO state government? Muhyiddin had even called Shahrir stupid. Who’s the stupid man now who dares not defend his own seat?
Thanks to his big mouth, Muhyiddin is being laughed and ridiculed for not contesting after UMNO pressed the button. In reality, the former PM knew he would lose spectacularly his own Gambir seat, hence the only way out is not to contest. To save face, he hides under some hilarious excuses. It’s not hard to understand why he is so freaking afraid to defend the seat. 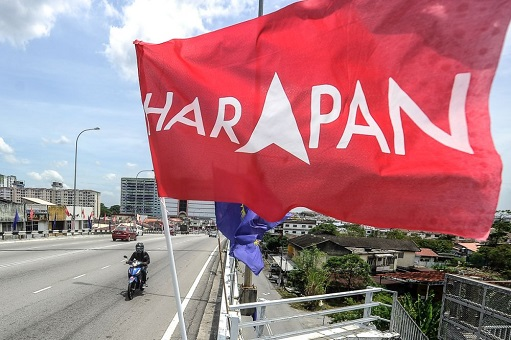 Pakatan Harapan Flag
In 2018, he won Gambir state seat by a majority of only 3,088 votes. Gambir has 20,975 registered voters comprising Malay (58%), Chinese (40%) and Indians (1.5%). However, Muhyiddin grabbed the seat when Bersatu was part of the opposition Pakatan Harapan coalition. With Malay votes split and Muhyiddin’s infamous betrayal, he will lose almost all the 40% Chinese votes.
The Chinese voters still remember clearly how power-crazy Muhyiddin pulled Bersatu out of the democratically-elected multiracial Pakatan Harapan coalition, leading to the collapse of the ruling government. They have been waiting since March 2020 to teach him a lesson after he joined forces with Barisan Nasional and Islamic party PAS to form a backdoor government called Perikatan Nasional.
However, karma is a bitch and within 17 months, the traitor was forced to resign by none other than Najib and UMNO president Zahid Hamidi – known as the Court Cluster – who led a group of 15 UMNO rebels to withdraw their support for Mahiaddin regime. Not only UMNO-Malays wanted to finish Muhyiddin, the Chinese voters wanted to punish him over his unforgivable betrayal.
But his biggest humiliation has yet to begin. His political party is expected to suffer heavy losses. Before the Johor legislative assembly was dissolved, the previous unelected Barisan Nasional-led government held 28 seats (UMNO – 14 seats, MIC – 2 seats, Bersatu – 11 seats, PAS – 1 seat) while opposition Pakatan Harapan had 27 seats – DAP (14), PKR (7) and Amanah (6).
As the leader of Perikatan Nasional coalition, his cowardice could see not only Bersatu’s 11 seats wiped out, but his party could disintegrate before the next 15th General Election. It will lead to a lost of confidence in both his leadership and the party. If Mahiaddin was a good leader, he should take the bull by the horns and lead his party by courageously contest Gambir seat – even if it means a defeat.
It was already bad that Bersatu had lost all but 2 seats it contested in the recent Melaka state election. It would become worse if it were to lose all its 11 seats in Johor. Even if the party, which is weakening, could win one or two of its seats as a consolation prize, the writing is already on the wall that both Bersatu and Perikatan Nasional are game over. 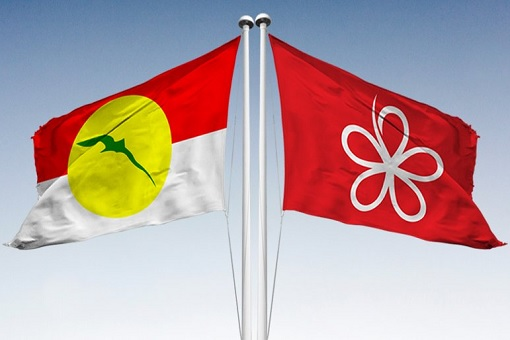 UMNO and Bersatu PPBM Flags
Laughable, despite having betrayed his own allies and comrades, the disgraced Muhyiddin has shamelessly sent his representative, Johor Bahru division’s deputy chief Razrul Anwar Rusli, to talk about another grand coalition with Pakatan Harapan and other opposition parties. Perhaps he thought the opposition was dumb enough to work with him again.
The untrustworthy Muhyiddin understood very well that it would be a suicide mission to go to the poll without support from either (governing partner) Barisan Nasional or (enemy) Pakatan Harapan. Bersatu does not have extensive grassroots or machineries in Johor. Even its partners in Perikatan Nasional coalition – PAS and Gerakan – are too weak to rally for support in Johor.
Adding salt to injury, Muhyiddin’s most loyal partner – PAS – has started sucking up to UMNO. Playing the Muafakat Nasional card, the Islamic party desperately wanted to piggyback on UMNO this round after betting the wrong horse (Muhyiddin) in the Melaka state election. However, to the Islamic party’s horror, the “greedy” UMNO offered only four state assembly seats to them.
Armed with confidence after winning two-thirds majority in the Melaka state election, the United Malays National Organization (UMNO) is ready to fly solo in the Johor state election. If UMNO can win big in Melaka, it can certainly win bigger in friendlier terrain Johor. PAS can either take UMNO’s offer or go fly kite with Bersatu. After all, beggars can’t be choosers.
Muhyiddin’s trusted lieutenants, International Trade & Industry Minister Azmin Ali and Home Minister Hamzah Zainudin, have been keeping a low profile since the disastrous Melaka results. When Bersatu, arguable the most hated political party in the country, is slaughtered again in Johor, all the opportunists and traitors like Azmin and Hamzah will have to think about their future.
Parti Bangsa Malaysia (PBM), a new political party set up as a backup by Azmin Ali and his loyalist Zuraida Kamaruddin, will see the entrance of the two traitors when they quit Bersatu. What will happen to Muhyiddin after the next national election is open to speculation. In the eventuality Bersatu closes shop, Muhyiddin will most likely go into retirement – a loser and the most hated man. - FT 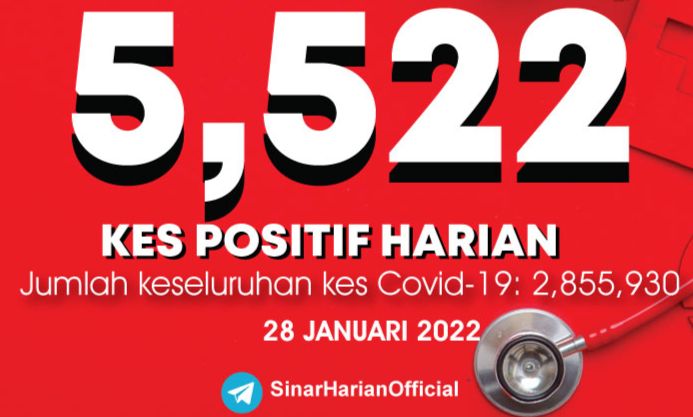