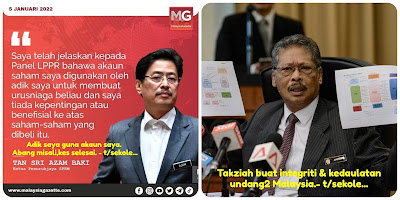 As Melaka braces for the second wave, Aras, a small boy from a fishing village in Teluk Berembang held my hand, eager to show me what’s left of his house ravaged by floods. He now lives with grandpa Yusof after having lost his parent recently. - MelGoh,CNA
Lessons from the floods...
The floods that inundated many parts of Selangor, the Federal Territory of Kuala Lumpur and Pahang two weeks ago were reminiscent of what happened in New Orleans, Louisiana in August 2005. The devastation caused by Hurricane Katrina illustrated the mismanagement and lack of preparation in the relief effort on the part of the government.
Thousands of people were trapped in their homes and stranded on rooftops, while those placed in shelters were left without food, water and proper sanitation. More than 1,800 people perished and the economic cost ran into billions of dollars.
The condemnation came fast. The New Orleans mayor at the time, Ray Nagin, was lambasted for inaction. President Bush Jr, who initially praised the Federal Emergency Management Agency (Fema), had to live with his mistake. Fema was asleep while 80% of New Orleans was submerged in water.
Fast forward 16 years and our National Disaster Management Agency (Nadma) is vilified for the same reason. Images of people caught in traffic jams, stranded fearfully in their homes and on the rooftops of mosques and buildings, captured on social media shocked the nation. The heavy rain since Friday (Dec 17) was a warning that things will get from bad to worse. 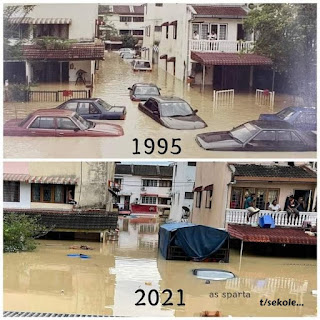 Taman Sri Muda, Shah Alam flood of 1995 and 2021. It looked liked it has
became more severe and serious. Who is responsible? Federal or state govts?
Yet even as many parts of the Klang Valley were experiencing the heaviest rainfall in recent memory, the authorities were hesitant to react to the call for help. There was no command and control. Or anyone to authorise the utilisation of critical assets to help the victims. It is the people who rose to the occasion. Social media became a powerful tool to galvanise people’s movement to help the needy.
There are simply too many stories of goodness and kindness. While many have given up on fellow Malaysians to be kind and to understand each other – largely because of bigotry and political divisions – people from all walks of life, regardless of race and religion, were helping each other in times of adversity. The true colours of humanity emerge in trying times. For Malaysia, it was during the misfortune caused by the flood.
I visited the Gurdwara Sahib in Petaling Jaya on Dec 26. It was a scene that was both gratifying and humbling. Volunteers from all races were there to help. The place was bustling with activity. Contributions came in and were later distributed with military precision. There are many such centres sprouting all over the country by religious groups, NGOs and individuals to give a helping hand. People came from all over bringing food and basic amenities to alleviate the pain of those affected.
Suddenly volunteerism is taking a new form. The young, especially, reacted in the most commendable way. As the true horror of the flood surfaced in the morning of Dec 18, volunteers were already in full gear preparing food, trying to save the stranded and readying them for temporary shelters. All these actions took place while the government was still unsure of what to do. Sadly, for many, Nadma, like Fema in 2005, did not react the way they should have. Like Fema in 2005, it failed spectacularly. 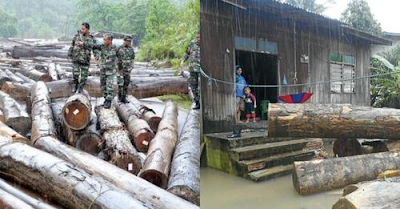 Kepala air yang potong balak...
While it is true no one expected such floods to happen in Selangor and the Federal Territory of Kuala Lumpur, every sensible person knows floods are inevitable these days. In the east coast, the monsoon will bring mayhem normally in December and January. Yet, in 2014, we failed to prepare adequately. Kelantan experienced one of the worst floodings. But the lingering image at the time was our then prime minister playing golf with President Barack Obama in Hawaii.
Things are no better this time. Political leaders are quick to point fingers at each other. Some are conspicuously absent, a few are busy printing their pictures on aid packages while those who wanted to endear themselves to the public became the target of people’s ire for their insensitivity and even stupidity. But then, there are many Members of Parliament and state representatives who served the people admirably without the glare of publicity.
It is foolish of us not to accept the fact that climate change is real. We are largely to be blamed. Moral of the story: we must take care of the environment and protect it. We have made mistakes in the past. There are housing areas and developments that shouldn’t have been approved in the first place. We have little regard for our rivers. We desecrate our jungles.
Even Zainal Abidin, the singer known for his signature song Hijau, was not spared this time. His house was among thousands affected by the floods. The lyrics of the song were about the death of the environment. Had only we listened carefully to the lyrics of Hijau or at least part of it, perhaps things would have been different:
Dewasa ini kita saling merayakan
Kejayaan yang akhirnya membinasakan
(For now we gather to celebrate,
The success which finally destroys us)
Spot on, Zainal! - Johan Jaaffar,the Star 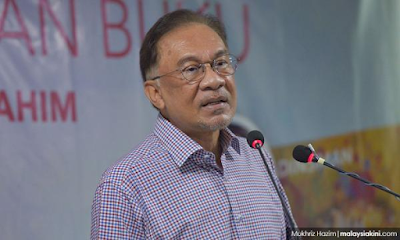 No family ties...
Anwar Ibrahim does not need nepotistic ties to remain relevant. Mukhriz Mahathir, who could not even complete the two full terms as the former menteri besar of Kedah, is hardly in a position to make disparaging comments about PKR president Anwar Ibrahim.
While ultimately Malaysians will judge as to the suitability of Anwar as the next prime minister, it is not for Mukhriz to say that Anwar is not appropriate for the post of the prime minister of the country.
Anwar would have been the prime minister a long time ago when he was deputy to Mukhriz's father, former prime minister Dr Mahathir Mohammed. It was Mahathir who spoiled his chances by imprisoning him for some trumped-up charges.
Much later, Anwar was Pakatan Harapan’s natural choice of prime minister after it won national power in 2018, but unfortunately, Anwar was in prison. Mahathir was made the interim prime minister until such time that Anwar was pardoned to return to active politics.
Mahathir should have made way for Anwar to succeed him. But this was not what happened. In fact, Mahathir hijacked the post, refusing to give it up to Anwar.
Whose fault was this, is Anwar to be blamed for this? Or the Harapan leadership?
Was it Anwar’s fault that the infamous “Sheraton Move” resulted in the backdoor government of Muhyiddin Yassin, the former prime minister, the architect of the arrest and detention of those who were allegedly linked to the defunct LTTE.
Why did Mahathir refuse to abide by the agreement with the Harapan coalition in vacating the prime minister’s post to Anwar? Did Mahathir create the preconditions for the ouster of the Harapan government? 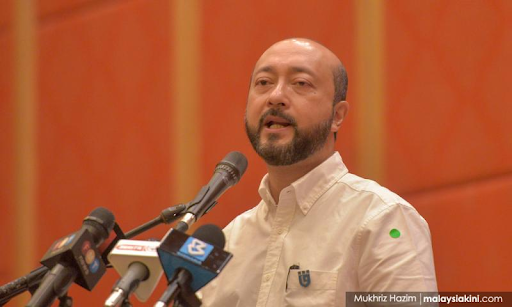 Whatever Mukhriz (above) might say about Anwar, the fact remains that he would have been the prime minister if his father had honoured the agreement with the Harapan coalition. It was Mahathir, only Mahathir, who betrayed the promise in handing over the post to Anwar.
Maybe Mukhriz would want to examine and digest a bit of history before joining others in saying that Anwar might not be appropriate as the prime minister. Is he suggesting that his father should be given another chance at the post?
Anwar would have been the prime minister had Mahathir kept his word. Mukhriz is the last person who should be talking about whether or not Anwar is a suitable person to become the prime minister.
I am not sure whether he is deluded into thinking that somebody else might stand a chance to become the prime minister for the third time.
Anwar might have lost his opportunity in the past, but he still stands a chance to become the prime minister in the future, provided Harapan gains political ascendancy in the next general elections. It is not going to be easy, but then politics is the art of the possible.
There might be calls for the resignation of Anwar and other Harapan leaders from some quarters, something to be expected. Without Anwar the opposition could not have arisen to the present level and strength.
Anwar might have his detractors, but he, unlike Mukhriz, does not need nepotistic ties to be relevant in Malaysian politics.
PKR has over 30 members of parliament, but Pejuang has four. In comparison with PKR, Pejuang is a mosquito party. In a tropical country like Malaysia, mosquito bites are common. In this respect, Mukhriz's diatribe is another mosquito bite against Anwar. - P.Ramasamy 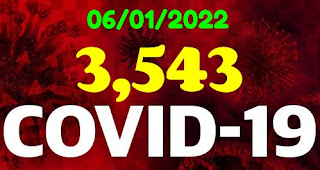