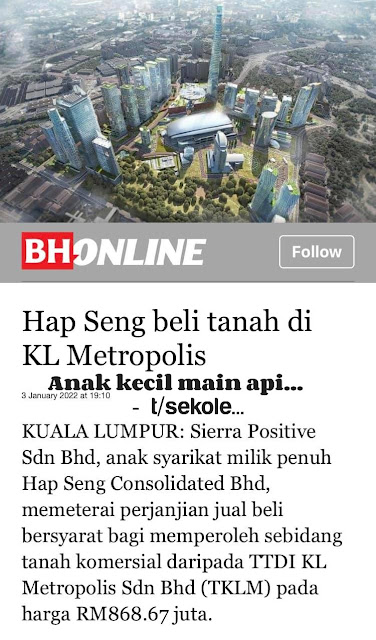 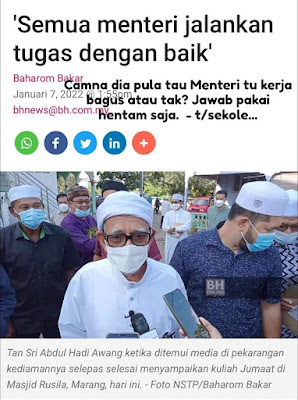 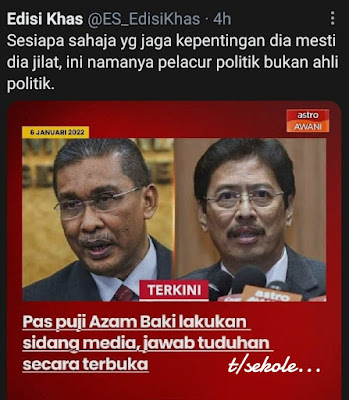 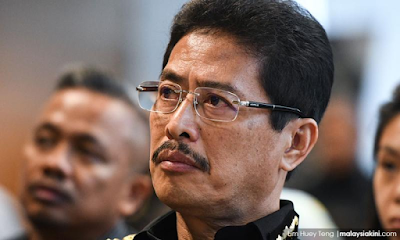 MACC – 'Mana ada corruption case'...
The old joke goes that MACC stands for “mana ada corruption case” when it comes to certain VVIPs. Now, it may have hit right back home when the very chief of MACC himself, Azam Baki, was shown to own almost two million company shares.
Was his civil servant salary enough to pay for it all? Or did he follow the “glorious” example of the Birkin bag lady, who claimed that she “menabung dari kecil” (saved up from young) to buy her luxury handbags, jewellery and watches?
No, instead the explanation given by the MACC Advisory Board (LPPR in Malay) was that the household dog, I mean cat, had eaten up the homework – namely that his account had been used by his brother to buy the shares.
Well, well, are we to believe that Azam has a very rich brother? Who did not even have his own share trading account? And was willing to risk 10 years in jail to “borrow” Azam’s account? 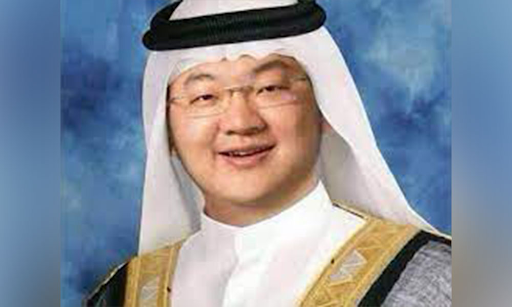 National comedy
Azam-gate can seem like our national comedy show being repeated. When the world was talking about Malaysian kleptocracy, there was NFA or “no further action” by MACC.
Back in Aug 2015, MACC had “found out” who “donated” RM2.6 billion into former prime minister Najib Razak's personal bank account but whoops, could not reveal the identity of this mysterious Middle-Eastern fellow.  So, of course, this led to more jokes that the mystery donor was none other than the royal “Arab” called His Excellency Al-Sheikh Prince Jho Low bin Penang!
Similarly, where was the MACC when Zahid Hamidi, the Home Minister before the last elections, was allegedly siphoning off RM31 million from the Yayasan Akalbudi “charity foundation” to pay off his personal credit card bills rather than helping the poor?
The comedy part of all this comes from the defences used. In his corruption trial, Najib Razak insisted that the millions that flowed into his personal bank account from SRC International were from “Arab donors”. This, said the Court of Appeal, was a tale which “surpassed even those from the Arabian Nights” (you know, all those Aladdin flying carpet stories and whatnots).
As for Zahid, he claimed that his officer had “mistakenly used funds from the Yayasan Akal Budi” charity to clear his credit card debts. Wow, can I get such an officer to “mistakenly” buy me a Mercedes too? 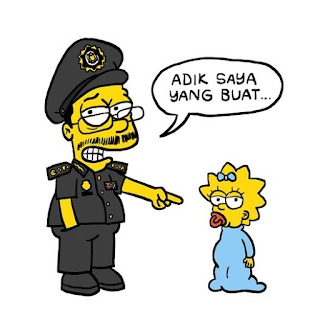 Casual corruption
What these cases reveal is that our VVIPs don’t even bother covering their tracks. For example, Najib was convicted based on a clear trail of documents that led straight to him. I mean, come on lah, even if you want to do something like this, at least take the trouble to route the money through a complex web of hidden nominees and offshore Cayman Islands accounts or whatever.
The fact that Najib and Zahid did their dubious dealings in plain sight means they believed the system would never punish them for their misdeeds. And their laughable excuses suggest that they don’t care how bad it all looks. In other words, corruption has become almost casual.
Now, we have the “cat ate the homework” excuse by LPPR. Apart from being funny, it’s also sloppy. It claims that Azam had completely transferred the two million shares to his brother by 2015, yet evidence shows that he still owned half of it in 2016.
This reminds me of how Anwar Ibrahim was charged for committing sodomy with his driver at the Tivoli Villas condos on a certain date when the darn place had not even been built! This led to an amendment of the court charges, which raised suspicion if the whole drama (complete with a mattress in court) had been cooked up.
When we put everything together – doing misdeeds in plain sight, laughable excuses and sloppiness in details – the public may ask: do these people somehow know that various watchdogs have been trained (with goodies?) to close one eye? This is the deadly serious implication of Azam-gate. Yes, a man is innocent until proven guilty, and so a proper investigation is needed. But who will do it?
If a teacher is accused of molesting a student, is it enough for the headmaster to declare that he had looked into the case and “all is settled”? Similarly, if the IGP himself is accused of something like taking bribes from gambling syndicates, can some police board declare that “oh it was all a misunderstanding lah”? Can a school investigate itself? Can the police investigate itself? Can an MACC body (such as the LPPR) clear the MACC chief?
So please forgive the public if they don’t entirely believe the clumsy “my brother did it” reason given by the LPPR. Sadly, trust in our institutions has been ever more eroded in the past 30 years, and Azam-gate is the latest blow. The VK Lingam “correct, correct, correct” scandal struck the core issue of judges’ independence, and that’s why a Royal Commission of Inquiry (RCI) was set up to probe the matter.
Azam-gate strikes at the heart of national integrity, so perhaps only an RCI will have the weight, standing and public confidence to handle this matter. However, LPPR chairperson Abu Zahar Ujang said, "Currently, there is no need…” for an RCI. 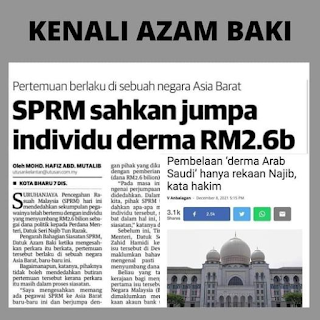 The scandal playbook
So what happens now? If we were rehashing the old playbook, somebody might soon announce that all this is “politically motivated”. For example, this is what Zahid’s supporters tried to claim for his corruption case.
Perhaps some politician trying to score popularity points will accuse professor Edmund Terence Gomez (the man who revealed Azam-gate) of being a non-Muslim trying to cause “disharmony” and “confusion” among the great brotherhood? The academic group Gerak has pointed out that some cybertroopers have already twisted this into a racial issue.
Meanwhile, the most “holy” party in the government will probably remain studiously silent on this crucial issue and choose instead to play up small sideshows similar to Timah whiskey. Yet such “patriotic” folks should remember how Zahid and his wife “defended” race and religion – by allegedly using over RM1.3 million in “charity” funds to pay for shopping at luxury stores like Giorgio Armani, Louis Vuitton and Hermes.  Ah yes, maybe these French brands are now part of the “perjuangan” too?
If all that doesn’t work, perhaps some politician will launch a new controversy (hey, how about Jawi-khat part two?) to divert attention away from Azam-gate. Or some toothless “committee” will be set up (to “look into” the issue) as a delaying tactic until everything is forgotten.
So how will Azam-gate be resolved? The man in the centre of the storm claimed that he is “answerable only to” LPPR. This is clearly wrong (morally, if not legally).
As the public guardian against corruption, MACC is answerable to all Malaysians. As the Malay proverb goes – Harapkan pagar, pagar makan padi. In other words, the MACC is the pagar or fence that guards the padi fields against thieves that will eat up society.
So when VVIPs are suspected of stealing public money, MACC cannot just shrug and say: “Mana ada corruption case.” Unless the fence itself has started nibbling at the padi? - Andrew Sia,mk 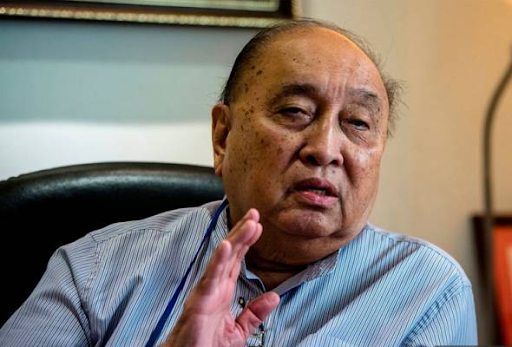 Azam Baki should have told his
brother to"f**k off" - Robert Phang
A former Malaysian Anti-Corruption Commission (MACC) advisory board member has grilled the graftbusters’ chief commissioner Tan Sri Azam Baki, asserting that he is making a mockery out of the people and the country’s judiciary system by looking to clear himself of any alleged wrongdoings.
Tan Sri Robert Phang (pix,above) now a prominent social activist and philanthropist, said Azam further convoluted the matter by implicating Anti-Corruption Advisory Board (LPPR) chairman Tan Sri Abu Zahar Ujang as the one who absolved him of any wrongdoing, suggesting LPPR as infallible.
He added that Azam breached MACC standard operating procedures (SOPs) by allowing his brother to use his share-trading account, saying such actions were equivalent to condoning an offence.
“101% he breached the rules. It concerns SOPs, because if my brother approached me (to use my trading account) and I was an MACC chief, I would tell him to f*** off.
“But now you allow him to carry on, so that’s the same as condoning an offence that amounts to the same punishment – in my view.
“He (Azam) is making a fool out of us, the system, and the entire judiciary. Letting him go is the easy way to go about it, but this case should be investigated by police or any other independent body, without fear or favour. “Because we are watching, the rakyat is watching, the whole world is watching,” Phang told The Vibes.
This is in response to Azam and Abu Zahar’s remarks, where the latter during a press conference yesterday insisted the MACC chief did no wrong in allowing his brother to use his share-trading account. 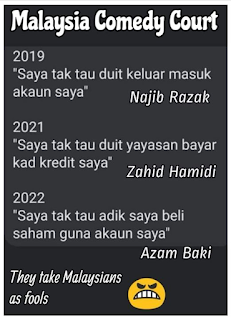 Phang today suggested to The Vibes that a royal commission of inquiry (RCI) into the matter would be the most suitable option to get to the bottom of it.
“A proper RCI should be formed to probe into the whole thing because the MACC chief himself has been implicated, so where is the faith, trust, and confidence that we are supposed to have in MACC? “The system has been screwed up by this stupidity, oh Azam.”
Phang added that LPPR should consider applying for a temporary interdiction of Azam’s tenure while investigations are underway to avoid any further conflict of interest. An interdiction refers to an official instruction from a court of law barring someone from a certain action.
“I would recommend for the board to interdict him with half pay, because when you say no pay, that could look like someone is convicted already, but when it's half pay, there is still a chance (to be absolved) and society will still think that you are not guilty until proven.”
In yesterday’s press conference, Abu Zahar said LPPR conducted a meeting with Azam on November 24 to seek an explanation on the allegations that have since plagued the anti-graft body. He added that LPPR was satisfied by the explanation given by Azam and found no criminal elements involving him or conflict of interest.
Azam meanwhile insisted he as the chief commissioner is only answerable to LPPR. He also claimed the allegations of conflict of interest brought against him were created by certain parties looking to take advantage and attack MACC and ruin the commission’s image and his personal reputation. – Emmanuel S.M. Chin,The Vibes 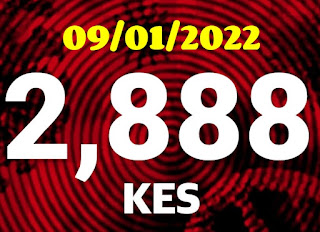