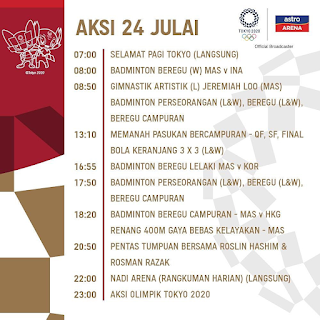 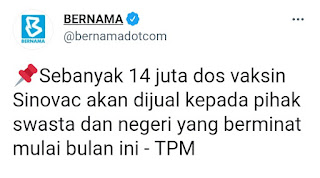 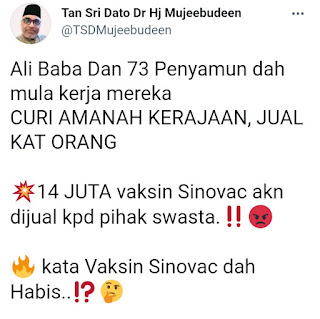 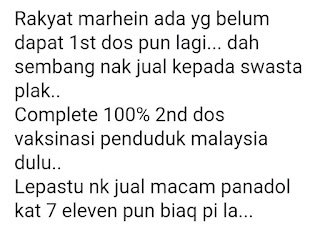 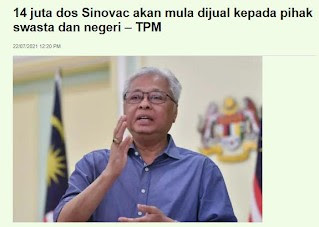 Selling Vaccines To Private Sector...
The DPM Ismail Sabri said 14 million doses of vaccines will be sold to the private sector.
Here is Status Terkini Covid-19 information from yesterday 21 July 2021. As you can see 10.3 million people have received the 1st dose and 4.8 million have received two doses. That is a total of 15.07 million.

First, here are some questions for Adham Baba.
But how many of these 15.07 million doses were real vaccines versus empty vaccines? Yesterday the death toll was 199 deaths. Is anyone dying because they were injected with empty vaccines?
Hello Adham Baba - macam mana pakcik dan makcik, uncle dan aunty dan orang tua nak tahu 100% dia kena suntik vaccine betul atau vaccine kosong?  Vaksin sudah berjalan sejak berbulan dah. Macam mana lah pakcik dan uncle yang di suntik vaksin bulan Februari, bulan April dsbnya boleh tahu mereka di suntik dengan vaksin betul atau di suntik empty vaccines?)
In my own estimation, we need about 75 million doses for double dosing not only our own 32 million population but also the (approx) five million foreigners who live amongst us. Going at this pace we should be able to cover everyone in the next four months - I hope.  And this is all already paid for - using taxpayers money.
So which private hospital is going to take so much risk (business wise) to buy 14 million doses of vaccines and then charge the public money for the dosage when the public can get vaccinations for "free" at 400,000 shots per day throughout the country?  And from August 1st any undocumented alien can walk-in to any vaccination center and get vaccinated as well.  (If that is correct - because ada juga flip flop pasal isu itu). 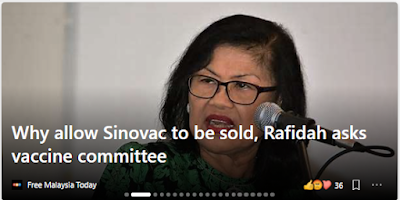 Indeed it does not make sense. Billions of Ringgit of taxpayers funds have already been allocated for the vaccination program. So why is there a need for "private sector" vaccination at a cost to be borne by the public?  The public has already paid for a sufficient dosage of vaccines by the Ministry of Health.
So Pharmaniaga has supplied 12 million doses four and a half months ahead of schedule. Terima kasih.  That is why we can hit 400,000 vaccinations a day. Thank you again. But obviously they also have an extra 14 million doses which they now want to sell off. It is an obvious case of terlebih stock.
I do not really blame Pharmaniaga if they have bought more than what they need for now - considering all the confusion, flip flopping, knee jerk reactions by the Government in handling this pandemic. And I am sure more dosages of vaccines are still on their way to Pharmaniaga.
My concern is this. Who paid for all those vaccines? Isnt it the taxpayer? To my understanding the Malaysian taxpayer has paid for the importation of all these vaccines. The Prime Minister said on 22 June 2021 that all the money allocated for the vaccines has already been spent.

So the Malaysian taxpayer has already paid for all the vaccines that are required. So  my question is who paid for those 14 million doses of Sinovac that are now being offered to the private hospitals?
I strongly suspect that those 14 million doses of vaccines have also been paid for by the Malaysian taxpayer.  Can  Ismail Sabri can answer this question. Duit siapa bro?  So if you are now offering those vaccines to the public, then you are actually making the Malaysian taxpayer pay twice.   This is very unfair on the Malaysian taxpayer.
The news also says that these Sinovac vaccines will be offered to the factory owners - obviously to vaccinate their foreign workers. So lets make the factory owners and the foreign workers pay.  And the Government has a big stick - if you do not vaccinate then you cannot open your factories. So the factories have no choice.
But at the same time from August 1st all the undocumented foreigners are allowed to walk in for vaccinations. But who paid for the import of the vaccines?   If I paid (because i am also a taxpayer) do I get a share of the profits?  -  Syed Akbar Ali 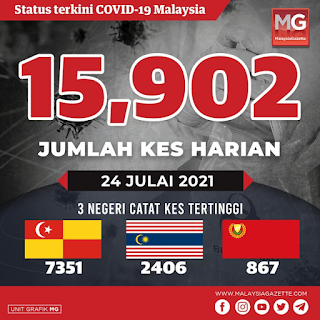