Tidak berpuas hati dengan jawapan itu, Dzulkefly berkata ia tidak menjadi persoalan utama kerana menurutnya antara faktor yang menyumbang kepada peningkatan jangkitan adalah keengganan KKM berkongsi data secara terperinci dengan kerajaan Selangor. Dzulkefly kemudian mendakwa JKNS tidak dibenarkan berkongsi data dengan kerajaan Selangor.
Adham: Yang Berhormat (Dzulkefly) mengelirukan Dewan.
Dzulkefly: Apa yang mengelirukan Dewan? You’re sleeping on the job (anda tidak buat kerja)! Ini tanggungjawab anda.
Tidak peduli dengan serangan Dzulkefly, Adham meneruskan penggulungan dengan menyentuh soal ujian saringan Covid-19 secara besar2an. - mk
This akin to committing a crime (a murder) then telling the arresting officer, that he (the murderer) will provide the answer in 10 days time. why the special treatment? so that the murderer will have time to escape or ask the King to help?
“The question that is being asked by the people now is: ‘What is my fate if I am facing a case involving a fine of RM10,000 and I have to appear in court tomorrow? Should I plead guilty to the offence?’ What will happen to these cases?
“So, I want an explanation. If this is true, then we need proof. If not, then the Yang Berhormat (Takiyuddin) is guilty of misleading this Dewan (Rakyat),” he said.Takiyuddin then replied that he would answer all these questions on Monday as ordered by the Dewan Rakyat Speaker.
“I humbly plead, to be fair to the government, I will answer all (questions) on the execution of the Emergency Ordinances on Monday,’’ he said.This then drew a multitude of responses from Opposition lawmakers who demanded answers from Takiyuddin immediately.
Opposition Leader Datuk Seri Anwar Ibrahim then stood up, telling Takiyuddin, acting on behalf of the government, to simply admit to its supposed mistakes by announcing that the government decided to revoke the Emergency Ordinances, instead of a proper consent by the Yang di-Pertuan Agong. - mk 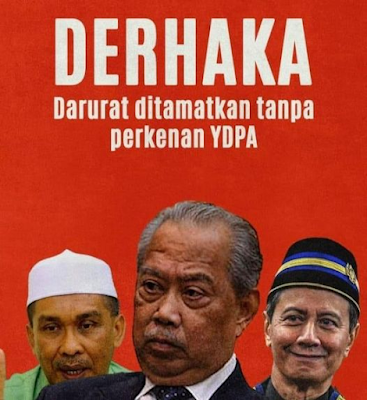 Did the King approved a backdoor
revocation of Emergency Ordinance?...
On the day police force was ordered by the backdoor Muhyiddin government to warn, bully, intimidate, harass and suppress hundreds of contract doctors who participated in a nationwide strike over discrimination and unequal treatment, the prime minister was himself bullied by ally – United Malays National Organization (UMNO) – into scrapping the existing emergency law.
Today (July 26) is the first day the Parliament reconvened for the first time since the Proclamation of Emergency on January 12. King Sultan Abdullah, either naively or deliberately, had granted PM Muhyiddin’s request for an emergency rule. Malaysia is the only country in the world that has declared an emergency as well as locking up the Parliament under the pretext of fighting Coronavirus.
The State of Emergency was supposed to end on August 1. However, the government’s mishandling of Covid-19 pandemic and mismanagement of the economy saw a spike in starvation and poverty. The people’s anger and frustration had forced the Agong (King) and nine Malay Rulers to intervene, including meeting with Oppositions, in order to prevent a dangerous uprising.
A rare emergency meeting was subsequently held on June 16 among the nine monarchs, which led to a royal decree that the Parliament should be reconvene, as well as a decision not to extend the emergency upon its expiry on August 1. The royal press statement specifically says that the Parliament must “debate” Emergency laws and the Covid-19 National Recovery Plan.
On Monday, however, the defiant prime minister, working together with the corrupt and despicable House Speaker Azhar Azizan Harun, rejected all attempts to debate emergency laws. In what appeared to be a last-minute plan to avoid an indirect “vote-of-no-confidence”, de-facto Law Minister Takiyuddin Hassan dropped a bombshell that left MPs speechless.
Mr Takiyuddin stunningly announced in the August House that Emergency Ordinances had been revoked since July 21, about 5 days ago. The problem is nobody knows about the revocation till it was revealed today. In fact, the scrapping of the emergency law has raised questions over its legality – it may have been done unconstitutionally. 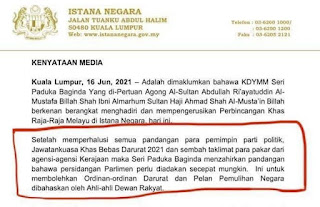 That’s because only the King can approve its revocation or the Parliament agrees (through voting) to annul it.
Either way, the decision to revoke the State of Emergency must be gazetted. But in the case of Takiyuddin’s claim that it had been scrapped since July 21, there is no record of the revocation gazette on the Attorney General’s Chambers website.
This means either Minister Takiyuddin has lied or all the UMNO Cabinet members who knew about it are equally guilty of keeping quiet. Either way, unless King Sultan Abdullah acknowledges that he had – quietly – approved the revocation of the emergency rule, the Muhyiddin government has again committed treason against the Malay Monarch Institution.
However, the Agong should be extremely careful about trying to cover-up for the illegitimate government. If the King tries to help Muhyiddin tomorrow, and if at a later stage proof emerges that the revocation was done illegally without the monarchy’s official signature in the first place, the King’s reputation and integrity would be tainted beyond repair.
But if the King actually knew and approved the revocation 5 days ago, it will raise more questions than answers. Exactly why did the monarch, the government, the Attorney General’s Chambers and the ministers keep quiet about the revocation, leading to the possibility of legal issues related to the “obsolete” emergency ordinances for the last 5 days?
Based on former Prime Minister Najib Razak’s remarks on Facebook that questioned the backdated of the emergency revocation, it seems that the dubious and illegitimate process was Muhyiddin’s hastily eleventh hour plan hatched to avoid a humiliating defeat in the Parliament. Of course, drama queen Najib was working hand-in-glove with UMNO president Zahid Hamidi to lay the trap.
Coincidentally, Zahid warned yesterday that all UMNO minister and deputy ministers would resign should the Emergency Ordinances continue to be in effect beyond August 1. Apparently, under Article 150(7) of the Federal Constitution, Emergency Ordinances will continue to take effect for 6 months even after the expiry of the State of Emergency, unless it is annulled through Parliament. 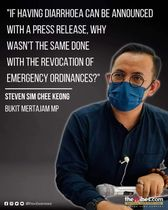 The fragile and illegitimate Muhyiddin regime knew about the loophole, and was planning to use it to stay in power or to intimidate political enemies. Unfortunately, UMNO “Court Cluster” also knew it, and wanted to use it to boot the prime minister. Zahid’s absence from the Parliament session due to Covid-19 infection was an excuse not to vote for either the government or the opposition.
Without sufficient pro-government MPs in the Parliament, the emergency could be annulled earlier than its expiry on August 1, providing the proof that the premier has indeed lost its simple-majority support in the August House. Takiyuddin’s unexpected announcement was nothing but a desperate move to save the Perikatan Nasional government from an orchestrated defeat.
It certainly defied the laws of physics that a power-hungry government of Muhyiddin, who has been desperate for an extension of the emergency rule to cling to power, would instead throw away the powerful weapon earlier than its expiration date. There is no record of the revocation gazette whatsoever because the decision was made just yesterday.
Thanks to the latest fiasco, all offences charged under the Emergency Ordinances (except Act 342 of the Prevention and Control of Infectious Diseases Act) since 5 days ago (July 21) are considered null and void. Likewise, all types of arrests based on the emergency laws can be challenged. Heck, for those who are adventurous, they could even sue the backdoor government for illegal arrests.
That explains why Prime Minister Mahiaddin alias Muhyiddin chicken out twice today. First was when his errand boy Takiyuddin, the secretary-general of PAS Islamist party who had previously mocked and insulted the Agong three times in defiance over the royal decree to reopen the Parliament, reluctantly cooked up the revocation story after Zahid Hamidi’s threat.
Second time was when Muhyiddin suddenly went missing in the Parliament. After presenting the opening remarks on the National Recovery Plan to fight Covid-19, the prime minister was nowhere to be found, leaving a clueless Finance Minister Zafrul to take the heat. Yes, the coward prime minister has gone MIA when the Opposition was ready to grill him.
Despite all the chaos in the Parliament today, King Sultan Abdullah must clear the air over the perception created by Takiyuddin that the monarch was aware of the revocation of the emergency. If the King did not give any consent, it means the panicked Muhyiddin could have created a vacuum of power after the self-described stupid prime minister surrenders its power, at least until August 1. - FT 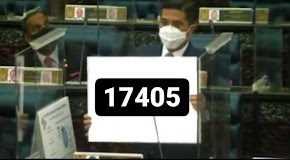