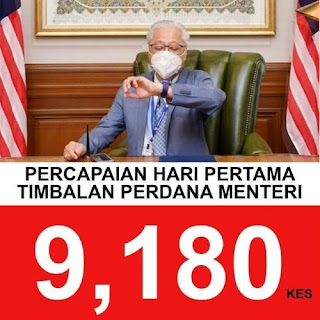 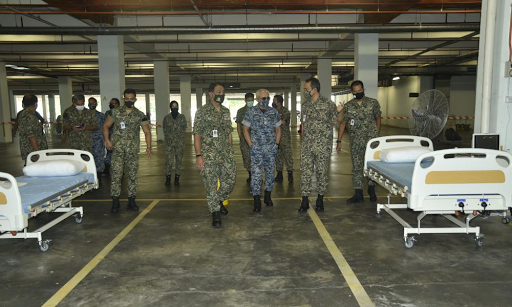 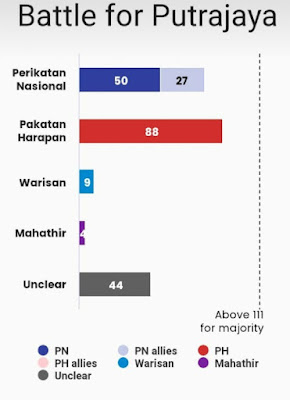 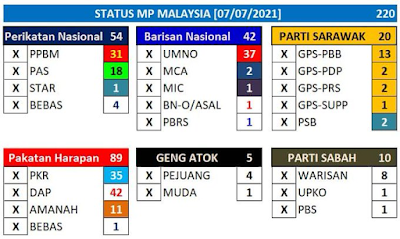 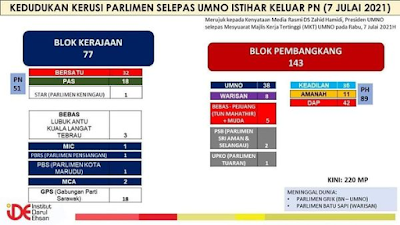 It’s a numbers game ultimately,  analysts say the people may have to wait for parliament to resume on July 26 for greater clarity. Till then, mr Muhyiddin remains as PM.  Meanwhile opposition is still seeking a compromised candidate...Melissa Goh

Ahli Parlimen BN dari Umno, MCA, MIC sepakat sokong Muhyiddin sehari selepas Zahid umum menarik sokongan gomen PN.Dalam krisis ekonomi, rakyat jauh lebih penting dpd percaturan parti. Sehubungan itu, ahli Parlimen sokong Muhyiddin sebagai PM kata mereka.
Umno’s Datuk Seri Mohamed Nazri Abdul Aziz said there are at least 32 Umno MPs who are still supporting the PN government but believes more may hop on after party president Datuk Seri Ahmad Zahid Hamidi’s announcement.
Umno sources told reporters that the meeting had been fraught and that there were members who disagreed with Ahmad Zahid, mostly those who were in the PN Cabinet. However, Malay Mail understands that they do not make up the majority of the Umno supreme council.
Nazri was reported saying that the Umno MPs who are likely to remain firm in withdrawing support for the Muhyiddin government may be limited to Zahid who is Bagan Datuk MP, Pekan MP Datuk Seri Najib Razak, Pontian MP Datuk Seri Ahmad Maslan, Machang MP Datuk Ahmad Jazlan Yaakub, and Gua Musang MP Tengku Razaleigh Hamzah.
He also dared the Umno supreme council to sack all 32 of its MPs “because we will definitely go all out about the decision”. According to Nazri, Ahmad Zahid wanted to be deputy prime minister and was not satisfied that his vice-president Datuk Seri Ismail Sabri Yaakob was given the role. - MMO 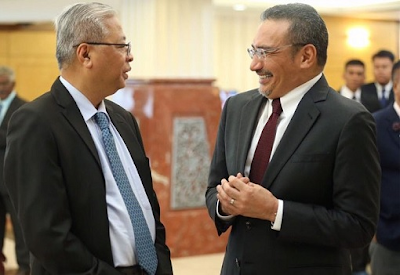 Sabri and Hishammuddin promoted,
traitor Azmin out of Deputy PM residence...
As UMNO president Ahmad Zahid Hamidi continues to drag his feet, undecided whether to quit the Perikatan Nasional coalition or not, Prime Minister Muhyiddin decisively throws some bigger candies to two UMNO warlords to further split and weaken the United Malays National Organization. The decision came ahead of UMNO Supreme Council meeting tonight (July 7).
In a move to checkmate the weak and indecisive Zahid, Senior Minister Ismail Sabri Yaakob has been appointed as Deputy Prime Minister, while at the same time retains his Defence Minister portfolio. Hishammuddin, meanwhile, has been promoted to take over Sabri’s Senior Minister post in charge of Security Cluster, while maintaining his Foreign Minister portfolio.
It was both a clever and desperate plan to foil UMNO president from an expected decision to formally exit from the coalition tonight, which will trigger the collapse of the Muhyiddin government. It was a clever plan because by giving a glamour deputy prime minister post to Ismail Sabri, the loyalty of Sabri faction is secured with Muhyiddin instead of UMNO.
“Turtle Egg” Sabri, overjoyed with his latest promotion, quickly accepted his appointment. Expressing his “deepest appreciation” to PM Mahiaddin, he asked all the people – regardless of race, religion, and political beliefs – to join hands to bring a better future for the country. Coming from the same man who defended a Malay thief in the “Low Yat” racial riots, his statement is laughable.
Perhaps Mr Sabri thought his intelligence has increased multifold after consuming truckloads of turtle eggs, so much so that Muhyiddin has decided to groom him as the future prime minister. In truth, there’s no provision in the Constitution of Malaysia for the office of Deputy Prime Minister, unlike the Vice President of the United States – the second most powerful man in the U.S.
Not only the Prime Minister of Malaysia can leave the office of Deputy Prime Minister empty, as what Muhyiddin had done since be was sworn in on March 1, 2020 until today, but he can appoint more than one Deputy Prime Minister. Still, the carrot was enough to buy the loyalty of simpleton Sabri, who is now forever grateful to the backdoor prime minister, whose popularity is plunging. 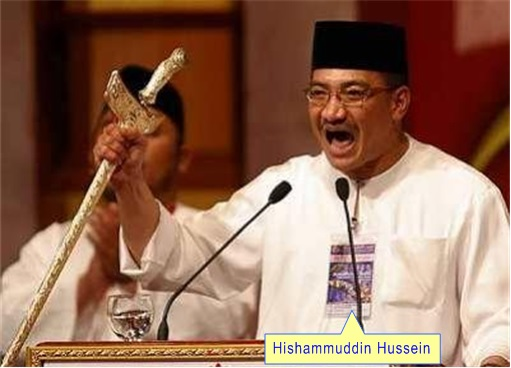 Hishammuddin Hussein with Keris
The simple fact that the Prime Minister Office says that Hishammuddin will assist Muhyiddin in the implementation of the Covid-19 National Recovery Plan speaks volumes about who is the new blue-eyed boy. In other words, Ismail Sabri is merely an office decoration and his promotion was largely because he commands the much needed UMNO MPs for the survival of Muhyiddin.
Of course, Sabri didn’t realise that, and even if he does, he won’t mind becoming a lame deputy premier. He would never have become the deputy prime minister had his own party ruled the country today. Based on his flip-flops, U-turns and double standards performance as the Senior Minister (Security Cluster) in charge of fighting the Coronavirus, he has failed spectacularly.
Even though Hishammuddin Hussein appears to be the new blue-eyed boy on the block, the fact that he was not promoted as deputy prime minister as speculated in preparation to take over the throne from Mahiaddin alias Muhyiddin has raised more questions than answers. It smells rat – as if there’s a deliberate attempt to put Sabri as an obstacle to prevent Hishammuddin from seizing power.
Likewise, Hishammuddin was equally grateful, extending his gratitude to the prime minister for his promotion. Without any senior position in his own party UMNO, Hishammuddin could not ask for more. Like colleague Sabri, perhaps Hishammuddin also thinks that his promotion was part of Muhyiddin’s chess play to prepare him for the ultimate throne – the 9th Prime Minister of Malaysia.
But it also shows that Hishammuddin did not command the so-called support of 25 MPs out of 41 Barisan MPs, as claimed by UMNO warlord Nazri Aziz, who admitted that he was the “mastermind” behind the latest political manoeuvre to obtain statutory declarations (SDs) from Barisan Nasional MPs in support of Hishammuddin. Therefore, Ismail Sabri is promoted instead to make up the numbers.
Interestingly, the divide-and-rule strategy may not only split UMNO and weaken Zahid’s leadership, but was also deployed to put Sabri and Hishammuddin at loggerheads. With both newly promoted UMNO warlords secretly thinking they are the favourite to become the next premier, when there isn’t any intention for Muhyiddin to step down, Sabri and Hishammuddin will be two very loyal suckers.
That explains why Hishammuddin was promoted as Senior Minister in charge of Security Cluster, but without the crucial Defence Minister portfolio. Similarly, Sabri was promoted as Deputy Prime Minister, but was tasked to assist the Prime Minister in managing the country. Does that mean Muhyiddin have failed in managing the country all this while, or was it done to flatter silly Sabri? 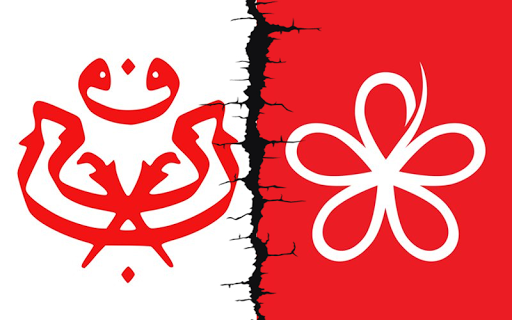 In the same breath, the promotions could also be interpreted as a desperate move by Muhyiddin to cling to power. Obviously he has used one of his trump cards (assuming he has more). The vacancy of deputy prime minister was designed to be empty in the first place to prevent PM Mahiaddin from being challenged, not to mention for the four senior ministers to check and balance each other.
More importantly, the sudden promotion of two UMNO warlords will disrupt the balance of power. What will happen to Azmin Ali, whom PM Mahiaddin had designated as the de-facto deputy prime minister? While Mahiaddin said when his new Cabinet was formed in March 2020 that all the four senior ministers are “equal”, he had also announced that Azmin will chair Cabinet meetings whenever he is absent.
The current situation is consistent with an article published last month (read here) – Civil War within PPBM and traitors in UMNO – where the prime minister was running out of time. Even if Gay Senior Minister Azmin cannot immediately become the prime minister, he should at least become the deputy prime minister by partnering with Hishammuddin Hussein.
The stunning elevations of Sabri and Hishammuddin means Azmin is out of favour. The most humiliation part is, the supposedly de-facto deputy prime minister has to pack and move out of the residence of the deputy prime minister. To make it more dramatic, Sabri and Azmin do not see eye to eye due to disagreement over the number of companies allowed to operate during the full lockdown.
Both Senior Ministers – Sabri (Defence Minister) and Azmin (Minister of International Trade and Industry) – had reportedly engaged in arguments that resulted in banging tables. The speculations that the Hishammuddin-Azmin tag team will become the next prime minister and deputy prime minister respectively have gotten Azmin even more big-headed.
However, the problem with Hishammuddin-Azmin tag team is that both individuals do not have the full support from their own parties. If UMNO cannot even fully support one of their own kind (Hishammuddin), how could the party accept an outsider like Azmin, who is not only a traitor but also a Muslim caught in gay sex, as the deputy prime minister?
Now, it is proven that indeed both Hishammuddin and Azmin lack full support from their own parties. How could Muhyiddin promote Sabri to a position more senior than Hishammuddin if the plan was to make Hishammuddin the next premier? Likewise, how could Muhyiddin promote Sabri as the deputy prime minister when that position belongs to Azmin? 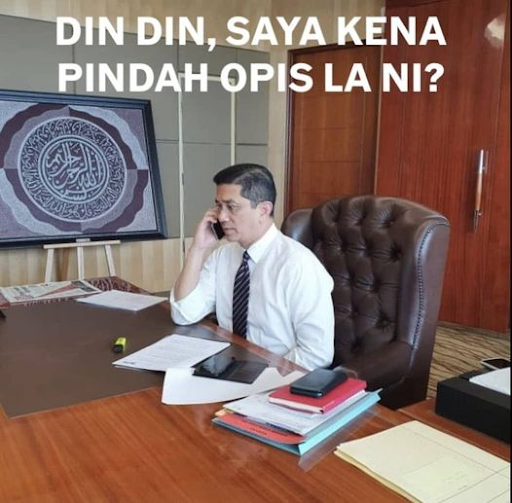 Azmin Ali - Sad and Worry
How could Muhyiddin betray Azmin, his most trusted lieutenant who had sacrificed 20 years of “Reformasi” with PKR after his betrayal that helped to crown Muhyiddin as the prime minister? Heck, Azmin has even officially joined Muhyiddin’s party Bersatu (PPBM) in August 2020 along with nine former PKR MPs who had betrayed the Parti Keadilan Rakyat (People’s Justice Party).
It seems there are more to the latest political manoeuvre than meets the eye. It actually involved the Civil War between Muhyiddin’s two top lieutenants – Senior Minister Azmin Ali and Home Minister Hamzah Zainudin. Now, the bad blood between both power-hungry men has been spilled publicly due to jealousy or envy over the unfair distribution of portfolio, positions and power.
Yes, there could only be one tiger on the mountain. And clearly the Hamzah camp has managed to influence Muhyiddin to promote the clueless joker Ismail Sabri, locking the deputy prime minister from Azmin’s reaches. At the same time, the tactical move breaks the Hishammuddin-Azmin tag-team, as well as buying the loyalty of both Sabri and Hishammuddin.
It’s easier for Hamzah to control “turtle egg” Sabri and corrupt Hishammuddin than the cunning Azmin. The problem with musical chairs, also known as “Trip to Jerusalem”, is that the game involves elimination. If Azmin is eliminated, he has to find shelters elsewhere, and in the process leaves with his nine loyalists. This will create new problems to Muhyiddin, whose legitimacy is being challenged.
Mr Mahiaddin may have talked and convinced Azmin that there’s no other choice but to temporarily promote the UMNO warlords. However, the promotions of Sabri and Hishammuddin also mean that Azmin could not pull any more rabbit out of the hat to help the premier. But can Azmin trust his boss? Crucially, can Muhyiddin trust Azmin not to backstab him as the ship sinks?
Like it or not, gay Azmin is screwed royally. He has more powerful enemies now with nowhere to go. It will get worse for the PKR traitor if this is part of Muhyiddin’s endgame to eventually merge Bersatu with UMNO, as envisioned by Mahathir too. Muhyiddin may look like a genius, but in reality, he is scraping the bottom of the barrel to stay in power. And he could pull the little tricks as long as Zahid is too chicken to make any move. - FT 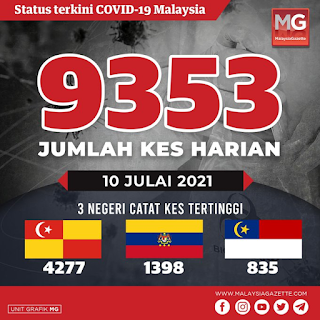 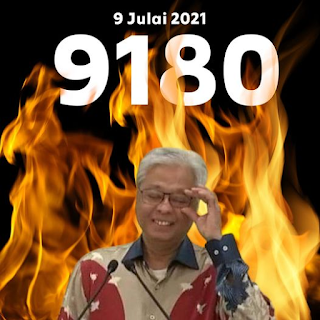