Is Zahid trying to flee to Saudi... Zahid's Passport Return Appeal Denied But His Persistence On Getting Back Passport Means He Really Wanted To Flee...

Ahmad Zahid Hamidi’s wish to fly to Saudi Arabia is over. The Federal Court has today thrown out his final appeal to get back his seized passport so that the former deputy prime minister could depart Malaysia to perform his “Umrah”, also known as “mini Hajj”, in Saudi. The Federal Court is the highest court and the final appellate court in the country.

The decision was particularly important because it was reached “unanimously”, meaning none of the 5 judges think there’s a justification to doubt the previous ruling on May 3 by the High Court. In short, all of them agreed that Judge Collin Lawrence Sequerah had considered all factors in dismissing Mr. Zahid’s application for the return of his impounded passport.

Umrah is basically non-mandatory lesser pilgrimage made by Muslims to Mecca, Saudi Arabia, which may be performed at any time of the year. Hajj, on the other hand, is obligatory or mandatory for every Muslim once in their lifetime – provided they are physically fit and financially capable. Mr. Zahid wanted to travel to Saudi between May 9 and June 3 to perform the “Umrah”.

However, High Court Judge Collin Lawrence Sequerah said – “From my understanding, there is no immediate need nor any obligation of the applicant to perform the Umrah. Although the applicant has been performing Umrah for the past 30 years, the situation and circumstances currently prevailing are very different as he is presently facing serious and numerous charges.”

Delivering the bad news to Ahmad Zahid Hamidi, the High Court judge justified his decision – “The presumption of innocence against the accused must be balanced with the fact that with like of the seriousness of the charges, the likelihood and risk of absconding that can all be discounted. So the application for the release of passport is dismissed.”

After the High Court’s verdict, Zahid Hamidi (comically mocked as Zahid Komidi by his critics), unsatisfied and devastated, went to the Court of Appeal to reverse its decision. The Court of Appeal’s three-member bench, led by Justice Kalthum Abdul Majid and flanked by Justice Harminder Singh Dhaliwal and Justice Stephen Chung Hian Guan “unanimously” rejected his appeal.

Together with the Court of Appeal’s decision on May 14, the final conclusion by the Federal Court today (May 23) means a total of 8 senior judges think Zahid, the second biggest crook after former Prime Minister Najib Razak, cannot be trusted to be put on an aeroplane and travels to Saudi to perform “Umrah” and comes back home to face his trials.

Zahid’s insistence and perseverance of wanting to perform “Umrah” is indeed very suspicious. As far as one can remember, no crook has been so persistent like him in appealing to retrieve seized passport to exercise the non-mandatory minor pilgrimage. Even Najib did not try to get back his passport to attend his son’s engagement in Indonesia about a week ago.

The risk of absconding is extremely high considering Mr. Zahid is looking at a maximum 20 years’ jail, whipping and a fine – if convicted. Like Najib Razak’s partner-in-crime, Jho Low, who used to hide in Dubai, Zahid could perform the same stunt. Zahid could use the religion card to fly out of the country and seek refuge in Saudi Arabia or nearby U.A.E (United Arab Emirates).

And like fugitive Jho Low, the partner-in-crime of Najib Razak, Zahid Hamidi could blow the same trumpet from the Middle East to justify his refusal to go back home – accusing the Mahathir government of harassment and political persecution against opposition leaders like him, crying and bitching that it is simply not possible to receive a fair trial in Malaysia.

Of course, there’s a small percentage he won’t disappear upon arrival in Saudi to perform his so-called “Umrah”. At best, Zahid wanted to beg and seek the God’s help so that he could escape prison. At worst, Zahid wanted to use religion to flee the country and return only after the present government collapse in the next general election. Either way, he’s absolutely desperate to get out of Malaysian soil.

Even if the Java-migrant somehow honours his promise to return home after his “Umrah”, which is highly unlikely, it would set a bad precedent. Other criminals and crooks, including Najib Razak and families, could argue in the High Court, Court of Appeal or Federal Court to also return their seized passports so that they can perform “Umrah”, only to seek refuge or political asylum in the Middle East.

It’s safe to presume big crooks like Zahid Hamidi and Najib Razak might have in their possession passports of various countries. Even if they don’t, it’s absolutely possible they can buy new passports with ease with their ill-gotten wealth well hidden in other countries. It will be too late to cancel their Malaysian passport once they make their move in Saudi Arabia.

Like the former Prime Minister of Thailand Thaksin Shinawatra, Zahid Hamidi and Najib Razak can live in self-exile, but still able to pull strings to destabilize the current Malaysian government. The decisions – “unanimous” – by the judges of the Court of Appeal and Federal Court were indeed terrible news to all the crooks of the previous corrupt government.

With the last chance to flee the country now effectively closed, “Zahid Komidi” will be facing his trials fixed on the following dates – Nov 18 to 22, Dec 2 to Dec 6, and Dec 9 to Dec 13. Although this is not about the 1MDB scandal, Zahid’s trial is expected to be another blockbuster when the prosecutors reveal how the crook steal and launder money to the tune of RM124 million. - FT 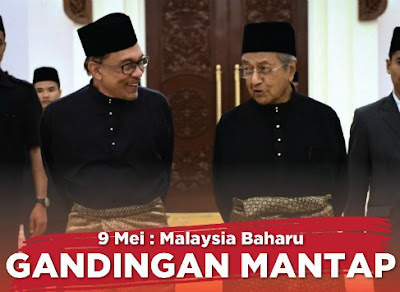