From Land Grab To Blackmail...

A Condition To Surrender The Land
Which Does Not Belong To Him...

For a while, people found comfort in Sultan Ibrahim of Johor as the monarch stepped forward to become the hero against tyrants like PM Najib Razak and extreme organizations like JAKIM. Before the notorious Jakim could strike, the sultan had declared that Christmas festival can be celebrated. During the Red Shirts rally, the sultan ordered (Johorean) racists and haters leave his state immediately.

The Sultanate of Johor was the only monarch who openly criticized the 1MDB scandal, mocking Najib’s silly donation excuse after RM2.6 billion was found in his account. The scandal had contributed to the depreciation of local currency, so much so that the Johor Queen – Oxford graduate Raja Zarith Sofiah – offered to help Malaysian students in the United Kingdom facing financial difficulties.

Sultan Ibrahim had also spoken about the need to revive English-medium schools like those in Singapore, throwing punches at UMNO politicians who were in “self-denial” and chose to play politics with education by being “heroes of their races”. He insulted UMNO politicians who talked about nationalism but sent their children to boarding schools in Australia and the United Kingdom instead.

The Crown Prince of Johor, Tunku Ismail Sultan Ibrahim, had laughed at the cowardly man – PM Najib – for not attending the “Nothing to Hide” dialogue. He said – “How can you have a dialogue called ‘Nothing2Hide’ featuring a person who has everything to hide? Obviously he won’t show up.” He also ridiculed Najib like “a drowning man who will try to reach and hold on to anything – including ‘faeces’”.

Yes, the Royal Family of Johor was the people’s champion, at least temporarily in 2015. The monarch suddenly made a spectacular U-turn on April 7, 2018, about a month before the May 9 General Election. The crown prince unexpectedly urged Johoreans not to rock the boat, suggesting that the people should continue to vote for Najib Razak, the same person he had mocked and insulted. 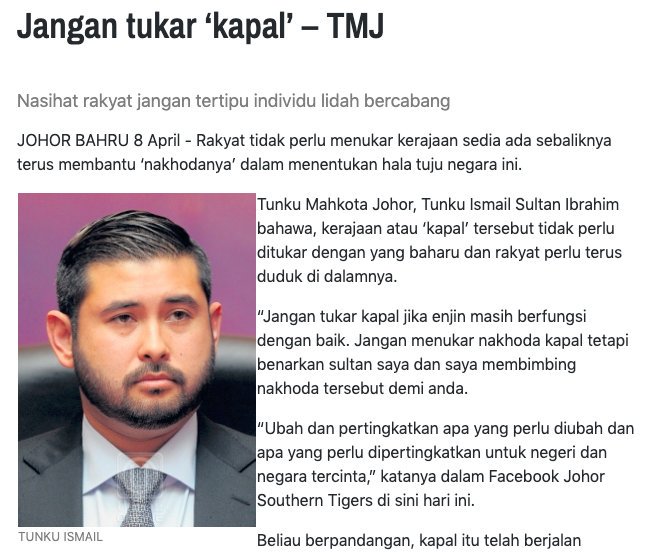 The Crown Prince of Johor posted his lengthy lecture on the Johor Southern Tigers Facebook page on April 7, 2018 – “Don’t change the boat if the engine is not broken, don’t even change the skipper but allow HM The Sultan of Johor and me to guide the skipper for you. Change what needs to be changed and upgrade what needs upgrading for the sake of our beloved country.”

Today, the cat is out of the bag. Now we understand why the Johor royal house had suddenly abandoned being the people’s champion and had thrown the support behind the world’s biggest crook at the eleventh hour. It was all about the greed for the gold mine – Johor land. And the initial opposition against Najib was nothing but drama to pressure the regime to give precious land to the royal house.

In what appears to be a tactical move by PM Mahathir to humiliate and expose the Sultanate of Johor, the premier announced that a 4.5-hectare plot of land in Bukit Chagar, Johor Baru, which mysteriously ended up transferred to Sultan Ibrahim actually belongs to the federal government. The land was initially reserved for the Johor Baru Rapid Transit System (RTS) train link.

The dubious land transfer was discovered by the Johor Land and Mines Department on January 28 this year. The plot of land was one of five in Bukit Chagar which the federal government received from the Johor government in 2012 as part of a land swap deal to build the Johor Baru Customs, Immigration and Quarantine Complex.

The naughty Mahathir said – “Yes. It is our land. We will claim back the land. We have heard only rumours from the press that the Sultan of Johor has taken over the land. If he (Sultan Ibrahim) paid for the land, then we have to buy back. If he hasn’t paid, we don’t buy back. It is our land … we acquired it. It is part of the land that was acquired for the construction of buildings.” 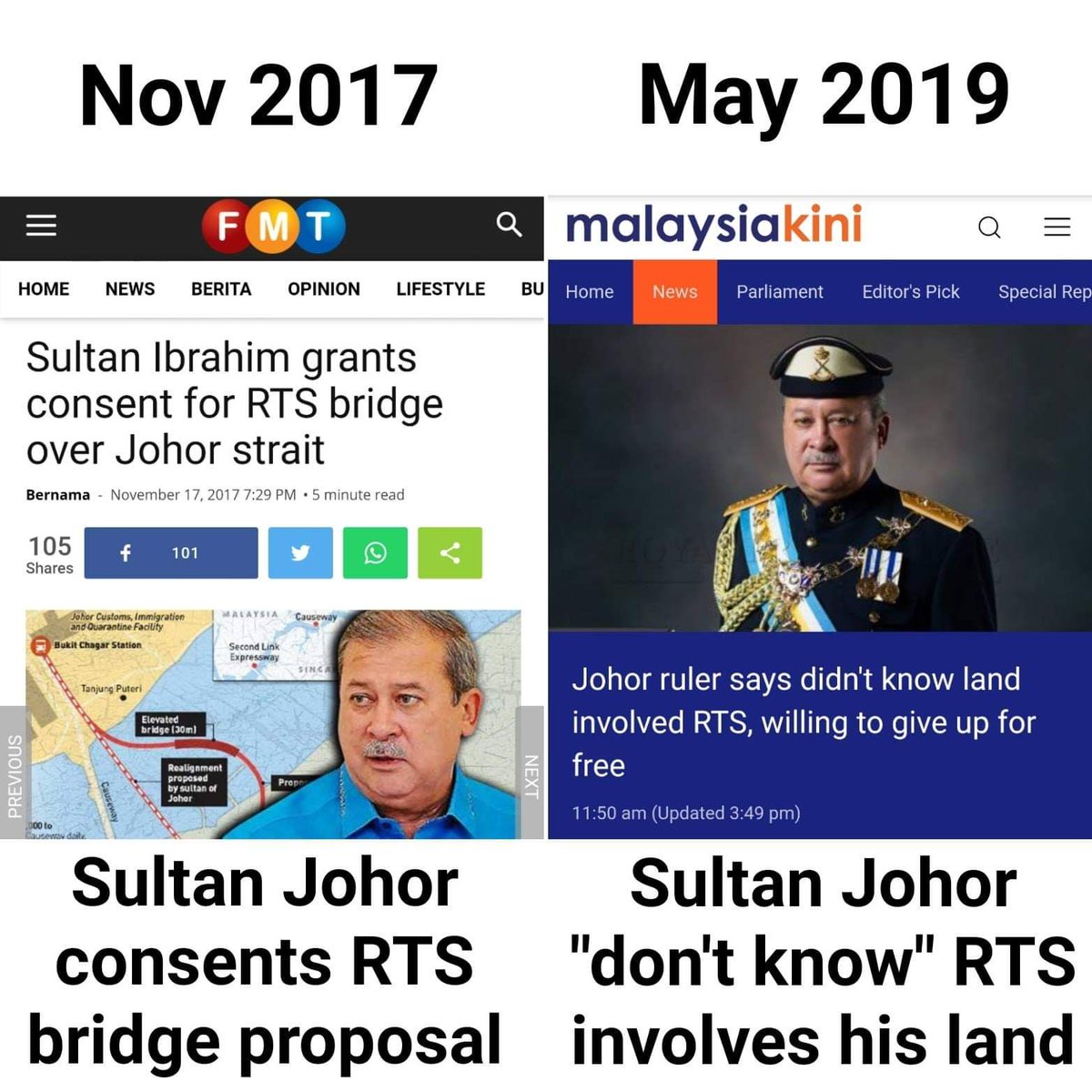 However, Mahathir diplomatically said he did not believe that there was any attempt by Sultan Ibrahim to wrongfully acquire the federal land. While the 93-year-old premier appeared to be giving face to the sultan to surrender the land with dignity, the message sent out was clear and loud – that the monarch had taken the land which did not belong to the royal house in the first place.

More importantly, PM Mahathir was firm in his message – the land belongs to the federal government and it must be returned – whether the Sultan Johor had accidentally or deliberately taken over the land. If the sultan had paid for it, it means he probably wasn’t aware that the land belonged to the government. If he didn’t pay, it was as simple as a land grab.

Sultan Ibrahim today claimed he was not aware that a parcel of land belonging to him in Bukit Chagar was involved in the proposed RTS project. Yeah, right. If that was true, how can he explain that the land was transferred to him – just 2 days – after he consented to the realignment of the RTS project, as published in an exclusive interview in the New Straits Times on Aug 7, 2017?

The sultan, through his private secretary, also said that he is willing to surrender the land to the government without any cost – only if the land is really involved in the RTS project. Does that mean the monarch will not hand over the land, which belongs to the federal government anyway, if the Mahathir administration does not plan to proceed with the project?

In other words, the sultan is setting a condition on a piece of property which does not belong to him. Apart from the RM495.3 million 4.5-hectare Bukit Chagar land, another 2.4-hectare undersea land to be used for the RTS project was also transferred to the Johor ruler. Both pieces of land would cost the government RM694 million in compensation to the sultan or about 13% of the overall project cost.

Now that the sultan has admitted that the land indeed was transferred to him, without any mention of the cost involved, it’s safe to presume that he did not pay anything for the 4.5-hectare land. It is absolutely ridiculous that Putrajaya would have to fork out RM495.3 million in compensation to acquire the land which it was supposed to own. 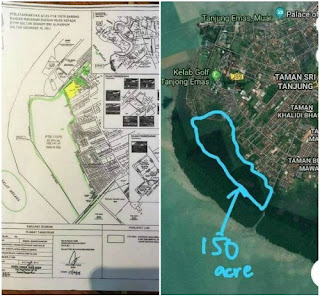 Interestingly, the ownership transfer was done under the previous Barisan Nasional administration between 2017 and 2018. So, was the land deliberately transferred by the despicable Najib regime as a bribe so that the monarch can make an easy kill – demanding RM495.3 million for the 4.5-hectare Bukit Chagar land? That would explain the sudden support of the Sultanate of Johor for the crooked Najib.

Alternatively, the possession of the valuable land could be used as leverage to claim a stake in the RTS project. Is this the reason why the sultan insists that the project must proceed? It’s worth to note that due to the realignment of the RTS, after Sultan Ibrahim had expressed “serious concerns” about its design in 2017, the cost of the project has ballooned from RM4 billion to RM5.3 billion.

But Mahathir appears to be not interested in the RTS project. After telling all and sundry that his government will claim back the land in Bukit Chagar, the premier said – “RTS would not solve the traffic problems. If we build the train, it cannot carry all passengers going to and from Singapore and it cannot carry all motorcycles. And the train is limited in terms of capacity.”

The prime minister also said that the land in Bukit Chagar was acquired for the construction of “buildings”, and did not mention anything about RTS project. The fact that the Johor crown prince went berserk, accusing Kadir Jasin, the communications adviser to PM Mahathir, of plotting with Mahathir’s special adviser Daim Zainuddin to “finish off” the monarchy goes to show that the fireworks has just begun.

You can bet all your money that unlike his protégé-turned-nemesis Najib, Mahathir will not kowtow to Sultan Ibrahim, who seems to be holding the new government hostage to either proceed with the RTS project or lose the half a billion Ringgit land. The land grab scandal is definitely affecting the reputation of the Johor Royal House, as demonstrated by the panicky crown prince. - FT 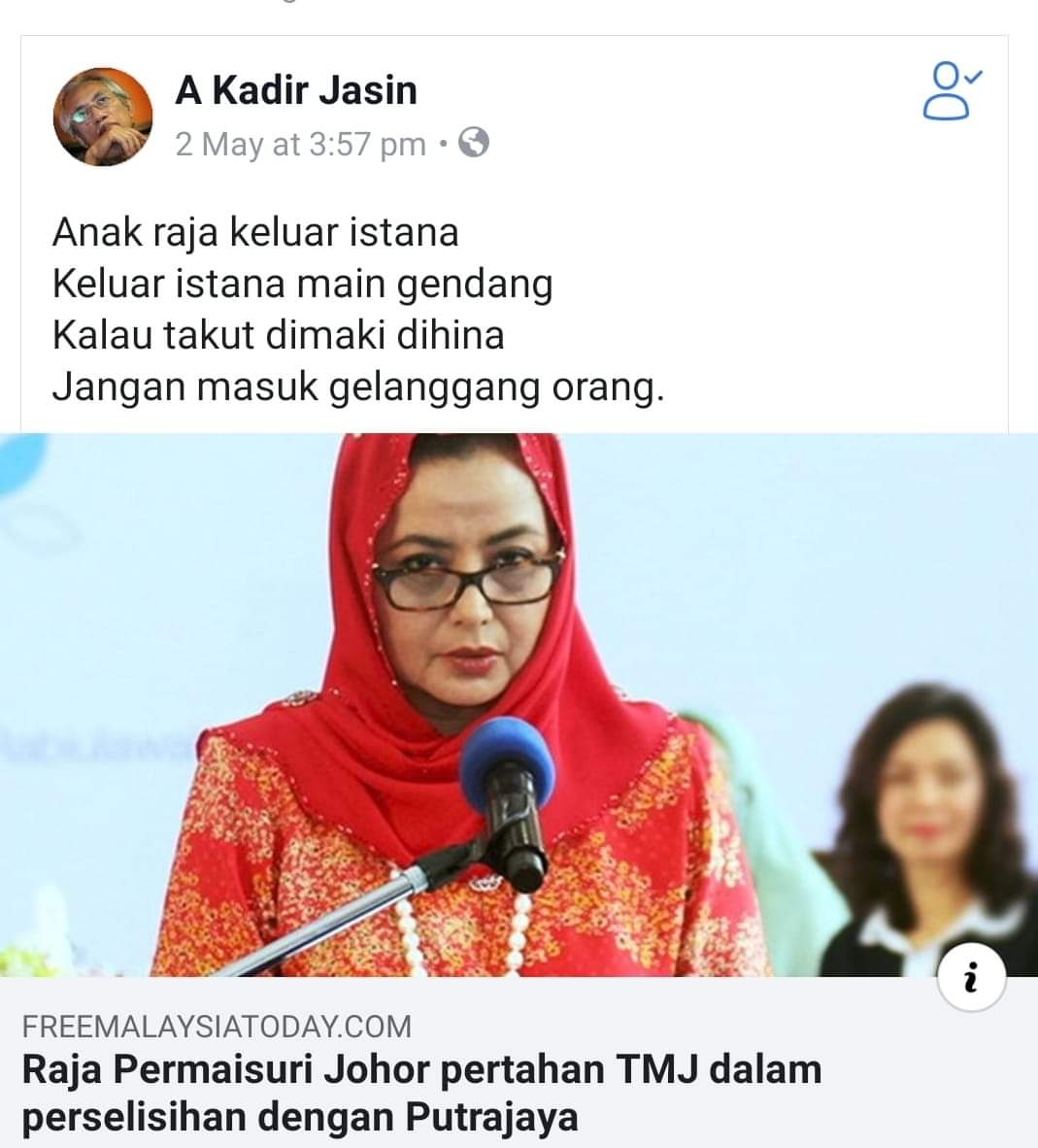