Johor Crown Prince Tunku Ismail Sultan Ibrahim should have kept his mouth shut and let the 93-year-old Mahathir completes his premiership. It would be easier to intimidate PM-in-waiting Anwar Ibrahim than PM Mahathir Mohamad, the old political “war horse”. The junior should know that the old man thrives when challenged, especially from the monarchy.

But the impatient crown prince could not wait to take revenge over the bad blood between Mahathir and Johor royal family, which date back to the early 1990s, during the Malaysian leader’s first period in office when the government removed immunities enjoyed by the Malay rulers following multiple episodes of assault by the Johorean royal house.

Clearly irritated by the junior who keeps provoking him and his government, Mahathir yesterday (May 6) called the Johor Crown Prince Tunku Ismail “a stupid little boy” who does not know anything. The PM said – “Well, he is stupid because he does not know what is happening. So, don’t talk. If you don’t know anything, don’t talk.” But the veteran and politician didn’t stop there.

“I don’t want to comment on the Sultan Ibrahim of Johor. If I say anything that is not good – it is not nice because he is the Sultan,” – said Mahathir. Many observers might have missed the significance of this remark. This could be interpreted to mean that the premier is “giving face” to Sultan Ibrahim, but is ready to attack him should the sultan chooses to join the bandwagon. 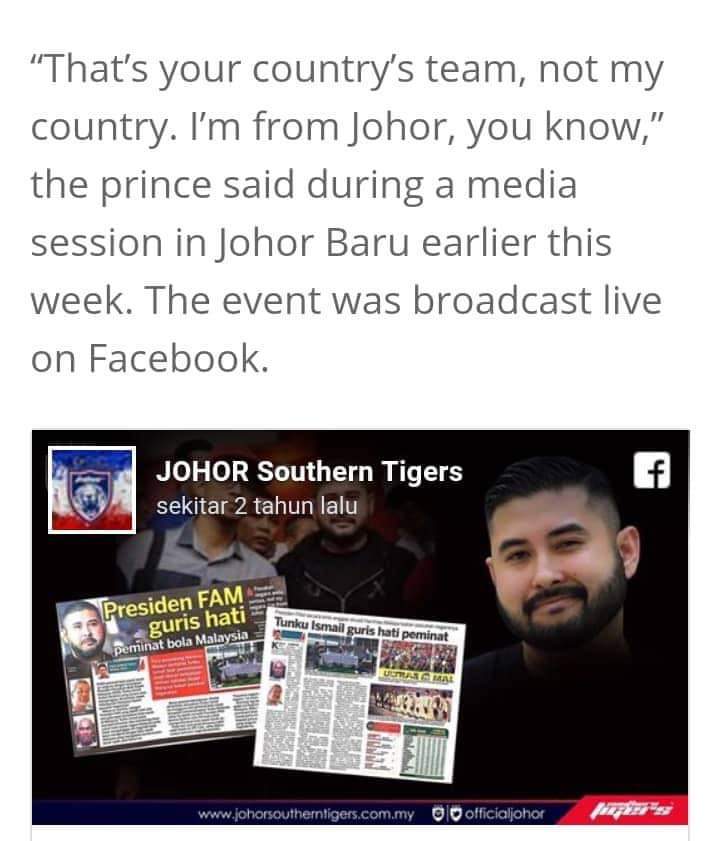 The outspoken crown prince has been criticising PM Mahathir and the federal government over matters that he thinks will affect the royal institution – from opposing the ratification of the Rome Statute of the International Criminal Court to insisting that the power to appoint the Johor’s Chief Minister resides with the Johor Sultan to telling “outsiders” not interfere with Johor’s internal affairs.

The supposedly sultan-in-waiting had even urged the people not to change the previous crooked Prime Minister Najib Razak, but annoyingly suggested that the people need to change the current Prime Minister Mahathir. But the dubious land transfer to the Sultan Ibrahim of a parcel of 4.5-hectare Bukit Chagar land worth RM495.3 million becomes the “crème de la crème” of the war of words.

The Johor Crown Prince, or TMJ (Tunku Mahkota Johor) as he is popularly known, obviously was trying to defend what many see as another “land grab” by the Sultanate of Johor when he complained that the noble deeds of the Palace of Johor were not being given enough credit. He asked – “How much land the Johor Sultan has given to the people and the government until now?”

TMJ has claimed the Johor royal family was a victim of “character assassination” and was being unfairly criticised over the Rapid Transit System (RTS) project. However, he fails to explain, let alone justify, how the land worth an eye-popping RM495.3 million was quietly transferred to his family – despite the fact that the land rightfully belongs to the federal government.

Was he trying to say that it was perfectly alright to grab a federal land worth half a billion Ringgit just because the royal family had in the past donated land for mosques and temples? It was precisely this remark of TMJ that had gotten Mahathir “excited”, hence calling the crown prince a stupid boy who does not know what is happening.

Like President Trump, the Johor Crown Prince has taken his war on Twitter, challenging a certain “Kadir” (believed to be referring to Kadir Jasin, the communications adviser to PM Mahathir) to proceed to “finish off” the royalty as planned at a meeting at Menara Ilham, the place where the Council of Eminent Persons (led by Mahathir’s trusted adviser Daim Zainuddin) hold their meetings.

But on Monday (May 6), the prime minister’s media adviser retaliated – calling for authorities to reopen old cases against the Sultanate of Johor. Interestingly, the country has a newly crowned Inspector-General of Police (IGP), Abdul Hamid Bador, an extremely loyalist of Mahathir. And curiously, Mr. Kadir made the call just hours after his boss Mahathir called the TMJ “a stupid little boy”.

Armed with a photo of “Little Boy”, coincidentally the code name for the U.S. atomic bomb dropped on the Japanese city of Hiroshima on 6 August 1945 during World War II, Mr. Kadir skillfully posted a message on Facebook saying – “The ‘Little Boy’ is extremely dangerous although it is small and does not know anything. So we have to do something. Merely talking is not enough.”

In a blast against the Johor Crown Prince, who had earlier challenged Kadir Jasin to finish the Johor Royal House all out 110%, and not 50%, the veteran journalist said 50% is sufficient – referring to the power of the atomic bomb. According to figures published in 1945, 66,000 people were killed as a direct result of the Hiroshima blast, and 69,000 were injured to varying degrees.

In retaliation to the Johor Crown Prince’s boastful claim that the royal family had been involved in various businesses since 1897, Kadir posted his message – “We ask the new IGP to reopen the IP (investigation papers) which were frozen or closed and for the Inland Revenue Board to determine how much taxes Mados Sdn Bhd has paid since it’s been in business for hundreds of years.”

Mados Sdn Bhd, a name associated with the Johor royal family, has been involved in sand extraction business for ages. According to a Companies Commission of Malaysia search by Malaysiakini in 2014, the grandfather of the crown prince, Sultan Iskandar Sultan Ismail, holds a 99.95% stake in Mados Sdn Bhd with the remaining shareholders being his second wife and nine out of 10 children from two marriages.

The company belonging to the Sultanate of Johor is also involved in property investment, provision of management services, timber logging and quarry operation. Under the previous Barisan Nasional government, the Johor royal family was allowed not only into billion-dollar project such as Forest City, but were also selling sand to Singapore – allowing the island republic to reclaim its land base.

However, according to Asia Sentinel, the illegal business of mining sand came to an abrupt stop when the new government of Pakatan Harapan takes over. The Royal Malaysian Customs Department, instead of closing one-eye like they had done under Najib regime, has confiscated barges operated by a company called Benalec, owned by Johor royal crony named Daing A Malak Daing A Rahaman. Interestingly, crony Daing A Malek has a 15.6% stake in Esplanade Danga 88 Sdn Bhd, which has 34% shares in the Forest City project. But the man who controls Esplanade Danga 88 is none other than Sultan Ibrahim who owns 64.4%. Other companies that have royal fingerprints included Spektrum Kukuh Sdn Bhd (SKSB) and Spektrum Budi Sdn Bhd (SBSB).

But despite the absence of an Environmental Impact Assessment (EIA) report, SKSB and SBSB went ahead with the Johor reclamation projects due to the royal strings. So, it’s not just about the possible tax evasion that the Johor Palace could face in its hostility with PM Mahathir, but also the obstacles of continuing to milk its business cash cows.

Now, do you understand why we said the Sultanate of Johor should be careful what they wish for? If you want to challenge Mahathir, you better make sure you’re as clean as a whistle. In the same breath, do you also understand why we said the real fireworks would start after the installation of 61-year-old Abdul Hamid Bador as Inspector-General of Police (IGP) this month? - FT 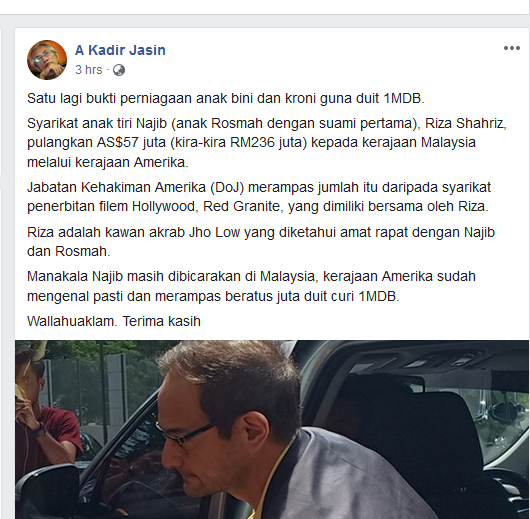