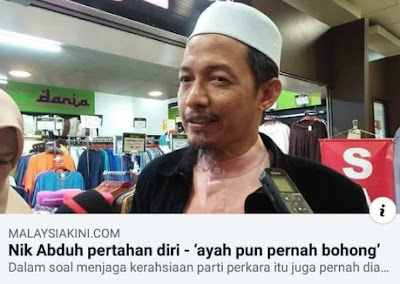 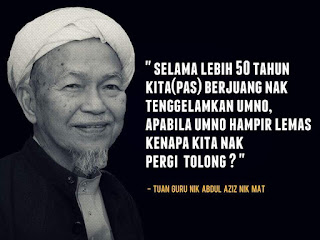 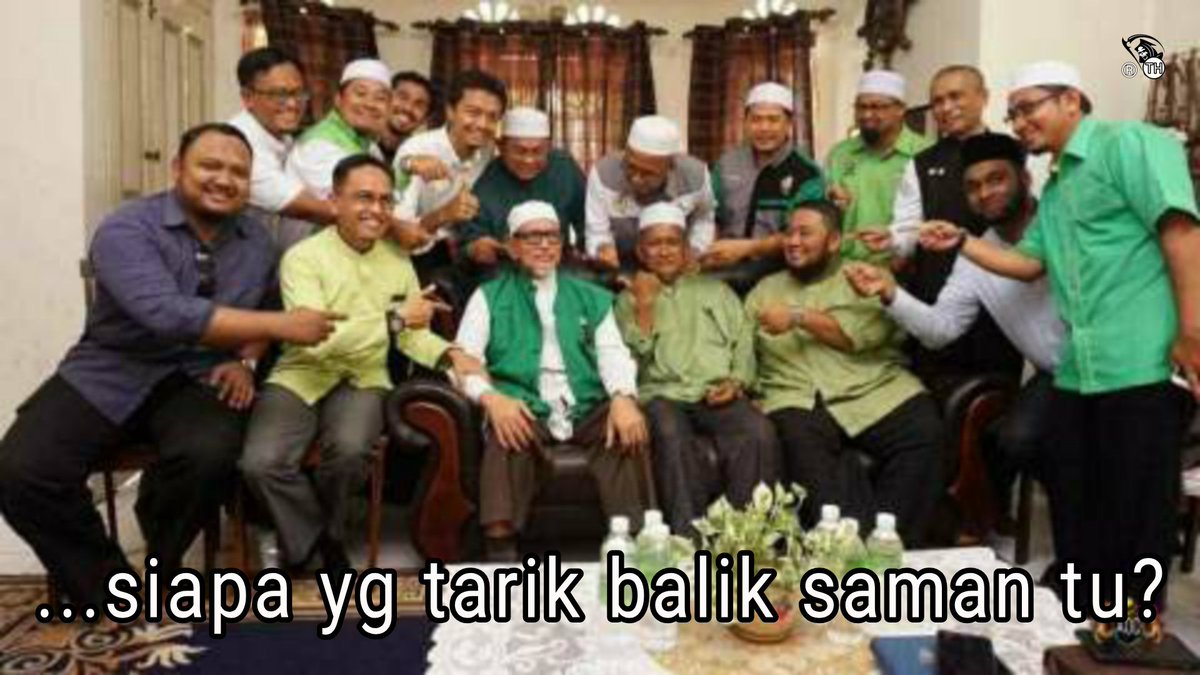 Nik Abduh Nik Abdul Aziz, the son of former PAS spiritual leader Nik Abdul Aziz, has decided to fight back. After months of denial, the disgraceful junior has finally admitted that he was indeed the person in an audio recording many critics claim was proof that the Islamic party received money from UMNO, during which crooked Najib Razak was the prime minister.

Last April, just a month before the May 9th elections, which saw the downfall of the Najib regime, Nik Abduh denied he was the person in the recording, and claimed the audio was fabricated to tarnish his image. But karma is a bitch. You can only lie for so long, before being exposed of accepting dirty money while pretending to preach to followers about the evil of corruption.

Today, Mr. Nik Abduh claims that he actually wanted to come clean on the highly-explosive audio recording, but leaders of his party, including President Abdul Hadi Awang, had urged him to lie about the bribery considering the 14th general election was around the corner. In other words, Nik Abduh admits “Holy Man” Hadi Awang had given his blessings to lie to their 2-million followers.

When push comes to shove, Nik Abduh has no intention of being made the scapegoat in the RM90 million corruption scandal. After all, his boss Hadi Awang and family members got the lion’s share of the cash. Hence, Nik cleverly took the pre-emptive strike, telling all and sundry that he didn’t lie, but was told to lie by the president of the Islamic party.

Heck, to make it more dramatic, Nik also claims that it was incredibly difficult for him to lie at the beginning. But the leaders of PAS insisted that he denies and lies about the audio recording, so he finally relented. This guy should be awarded the Oscars for his acting talents. Perhaps he would also obediently jump from the KLCC Twin Towers if Hadi Awang orders him to.

To further justify his action, Nik Abduh has even brought up his father’s name, claiming that his late father had also lied in the past, apparently to protect the Islamic party’s secrets. At the rate he drags his father, president and everyone under the sun into the RM90 million bribery, it makes you wonder how many mountains of lies have the holiest political party told their gullible supporters.

Caught with his pants down, Hadi Awang now said he is not bothered by Sarawak Report editor Clare Rewcastle-Brown anymore, who continues to bring up the RM90 million fiasco, despite the Feb 2’s out-of-court settlement with the PAS president. It’s absolutely amazing that Mr. Hadi suddenly isn’t offended anymore for being accused of accepting bribes.

After spending millions, even to the tune of asking members to donate to a fund amounting to RM3 million to meet the cost of the legal suit against Sarawak Report, Mr. Hadi has a new silly story – it did not matter that the Sarawak Report kept its article online accusing the PAS leaders took RM90 million from UMNO, because it was already public knowledge.

Seriously? If what Clare Rewcastle-Brown wrote did not matter at all, why on Earth was Hadi Awang so freaking furious of the allegations, so much so that he had flown all the way to London and sue the British journalist in 2017 over an article that several PAS leaders received RM90 million from former Prime Minister Najib Razak to secretly support Barisan Nasional?

Pro-PAS cybertroopers, propagandists and bloggers are getting funnier in their defence of Hadi Awang and his minions. They could only argue that since the editor of Sarawak Report had also withdrawn her counterclaim against the PAS president, it shows Clare Rewcastle-Brown was guilty too. They deliberately omitted the part that the damaging articles remain online even after the suit was settled out of court.

According to PAS vice-president Mohd Amar Nik Abdullah, the allegations made by Rewcastle-Brown against PAS were baseless and without any strong evidence. He said – “To us, the fact that she agreed for the matter to be settled out of court indicates that she had no solid proof.” Have all the PAS leaders suddenly become fabulously dumb?

If the British journalist had no solid proof, why the hell did the holiest man in Malaysia – Hadi Awang – stupidly agrees to the out-of-court settlement in the first place? It was the PAS president who offered to settle his defamation suit, not Sarawak Report. Clare Rewcastle-Brown probably agreed to the offer because to continue with the lawsuit in the UK, it would only benefit the lawyers.


That explains why Clare Rewcastle-Brown was delighted with Abdul Hadi Awang’s offer. She doesn’t need to continue paying her lawyer, yet her articles can remain published online. The fact that the PAS president, with tail between legs, has not made any demand for the article to be removed, let alone an apology, is already the clearest proof that the British journalist possessed proof as solid as a rock.

And that proof is the audio recording of Nik Abduh admits to taking money from UMNO. That piece of evidence is more than enough to wreck havoc on the PAS Islamic Party’s reputation and integrity if the lawsuit continues in the London court. The question whether Hadi will lose his case in the UK did not arise at all. The writing was on the wall that he will certainly lose his lawsuit.

PAS had no choice but to eat humble pie by offering an out-of-court settlement to Sarawak Report. To twist and spin the settlement as a moral victory is like saying Najib’s stepson, Riza Aziz, had won despite agreeing to pay the United States government US$60 million to settle a civil lawsuit that sought to seize assets bought with money stolen from 1MDB.

The RM90 million scandal has given Hadi Awang sleepless nights, so he desperately wanted to run away from it. When he first sued Sarawak Report in 2017, he hadn’t a clue that Nik Abduh would be so stupid as to admit taking dirty money from Najib. He thought he could call Clare Rewcastle-Brown’s bluff when the British investigative journalist exposed the massive corruption in the Islamic party.

Still, the holy man was clever enough to cut his loss. But the damage has already been done. To protect himself and the interest of the party, the PAS president is more than willing to sacrifice Nik Abduh. However, Nik Abduh refuses to surrender without a fight, throwing everything, including the kitchen sink and the good name of his father, to cleanse his tainted name. - FT 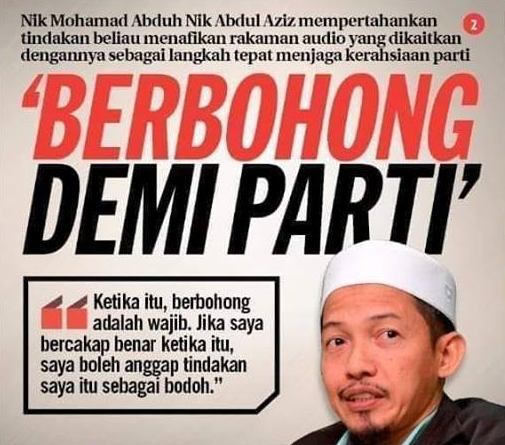 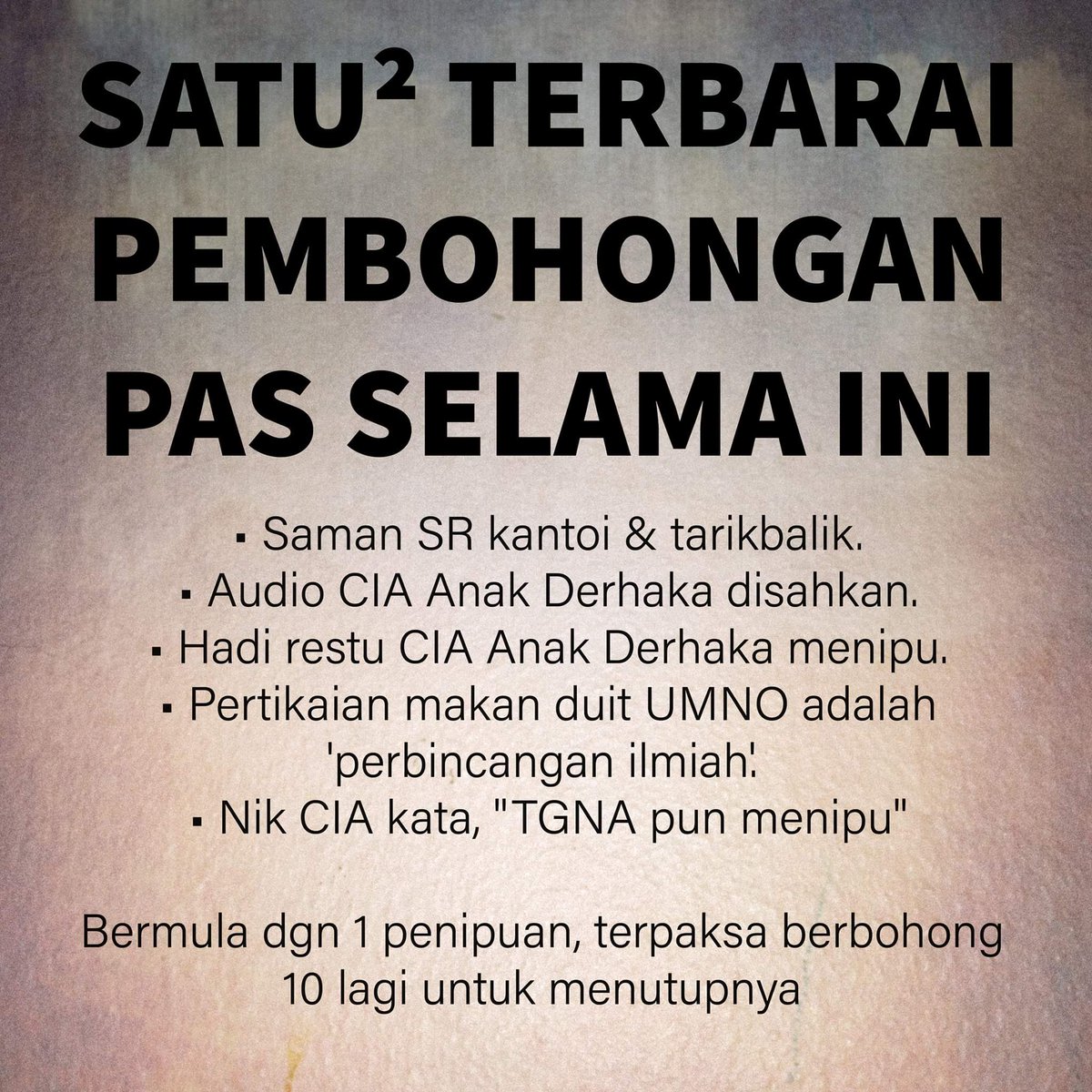 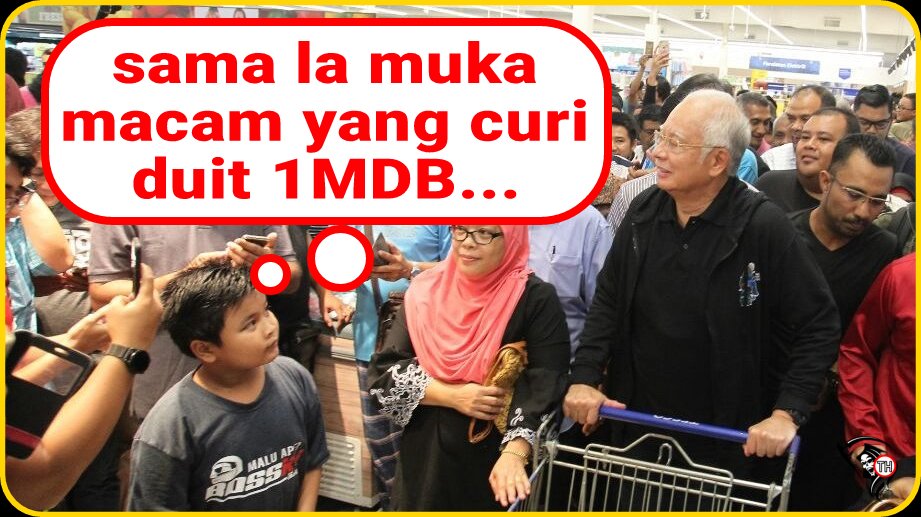