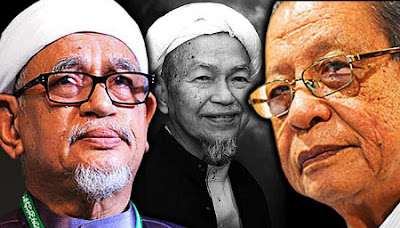 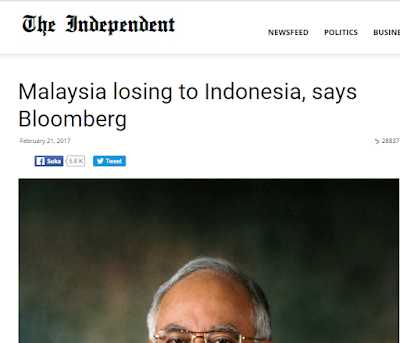 Will the kabilah DNA bahalol understand any of this? I am afraid not.

So lets keep it simple for them.

Here is some 'inside' info folks. The RUU355 is just bullshit. No one in PAS cares about it. Semua wayang saja. There is only one item on the menu at Restoran PAS. That item is Kelantan.  PAS wants to keep Kelantan.  RUU355 sells very well among the Kelantanese folks.  That is all.

So they are going to table RUU355 in Parliament in March. It will NOT go beyond a first reading. This is what the 'inside info' says. After the first reading they will postpone it for a second reading. And that will be the end of it.  As Rafizi Ramli said in that video, they themselves withdrew their own motion. The motion did not pass. Or they did not pass motion. Bawang will declare UMNO as "halal".

By April, it will be a dead issue. Sarawak and Sabah will be asked to forget about it. MCA already knows it is just a ploy to help PAS please their supporters, especially in Kelantan.

Folks say that MOI has delegated Jawa Man to handle RUU355 with Bawang. So Bawang now meets Jawa Man. When they meet of course they exchange gifts. Of course one fellow gives a bigger gift than the other fellow.

By the way, talk is Rafizi and Brader Anwar are going all out to take down Azmin. Maybe that is why Tun Dr Mahathir was booed at the recent gathering. The idea is also to embarass Azmin. Brader Anwar does not support Muhyiddin, the president of Bersatu.

Brader Anwar will agree to endorse "someone else" as PM if he is promised a full pardon.  Here is the catch. That can only happen if Pakatan wins the GE14. So he has to be inside prison until the election results are known.  That is a huge risk that Brader Anwar will be taking. But he aint got much choice.

Some people now say the elections will only be held in 2018. Not 2017.  The economy is getting worse by the day. If some of that RM400 billion of Chinese  "investments" are fast tracked, it may ease the situation. But I dont think so.

(Here is a digression. Friends say that the Jabatan Hutan guys are not patrolling the jungles because there is no more budget for petrol and diesel. So they just sit in the office. Poachers and kayu gaharu thieves please take note. Jesus is not watching the jungles (got that right this time.))

The longer they wait, the worse things will get. The economy is grinding down, especially the Malay economy.

Coming to PAS, the party is seriously split... 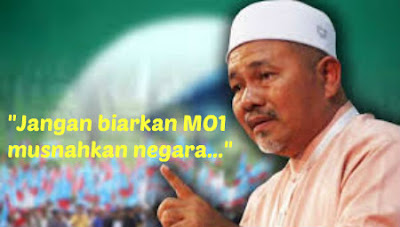 Tuan Ibrahim Tuan Man the PAS no. 2 wants to get rid of MOI. He can see that MOI is destroying the country. Tabik Tuan Ibrahim. Kita semua sokong.

Bawang and Tin Sadin's son dont agree. They are dedak eaters. Rumour is that the fantastic piece of KTM land at the junction of Jalan Bangsar and Jalan Maarof (the old Lever brothers factory) has been "given" to the same son of Tin Sadin.  Maybe worth over RM200 million. Boleh lah beli Audi Q 7,000,000 !

Talk is Bawang does not care. His personal glory now is to win T'gganu again and become MB. That is all he wants. He is also living on borrowed time. That ticker is not ticking too well.

PAS cooperates with DAP in Selangor. Also in Perak and Pahang. Tuan Ibrahim has no problems with DAP. Only Bawang is the problem.

DAP will not mind if MOI  is tarred, feathered and worse.

Conclusion :  Does the BN and especially UMNO really think they can predict the outcome of the GE14?

I think that even if the election were held today, the BN will lose, especially the States. Its always the economy stupid. The economy is going down. The longer they wait, the more they will get burnt. - ostb

The National Parent-Teacher Association Consultative Council (PIBGN) has told teachers not to bring their political ideologies with them to school.

PIBGN president Mohamad Ali Hassan said politics in the classroom would do the students no good at all.

“It may create division when politics come into the classroom because students may feel suspicious of one another,” he told FMT, adding that such an environment was not conducive for learning.

He was commenting on an FMT report that an MCA division leader had been appointed headmaster of SMJK Yoke Kuan, Sekinchan in Selangor.

Sungai Besar MCA deputy division chief Lua Toong Aik, who is the chairman of the school board, had defended his decision to make his MCA colleague, Siah Pang Woon headmaster of the Chinese secondary school by saying the school had the need for a Chinese-speaking teacher.

Siah’s appointment was questioned by Sekinchan assemblyman Ng Suee Lim in a press conference, during which he claimed MCA had appointed Siah because the party wished to spread its influence in the school.

The DAP rep said there might also be a conflict of interest between the role of teacher and political leader.

Meanwhile, Ali said teachers “must adhere to work ethics, and serve without bias”.

He also told parents to be aware of what their children were taught in school.

“File a complaint to the state education department if your children are fed politics in class,” he said.

Amanah communications director Khalid Samad said teachers should teach the students moral values and to fight against corruption and keep their political opinions to themselves, for their own sake.

He claimed that democracy in Malaysia was not “mature” enough for teachers to express such opinions.

“Teachers have been targeted because they support the opposition,” he said, alluding to PAS’s allegation that 80 teachers in Kelantan were transferred after the last general election (GE13) in May 2013.

FMT checked with the public service department and found that civil servants must obtain permission from their heads of departments before taking part in political activities.

“A disciplinary unit will hear the complaints of the teacher’s alleged misconduct.

“If the teacher is found guilty, the possible punishments are a transfer, pay deduction or termination,” he said, adding teachers are most likely to be axed for involvement in hard crimes.- fmt

Kam Teow Eng - This could be a case of, if UMNO can do it, so can MCA or any of its component parties. Follow TAH KER( elder brother) and one can never be wrong. But wrong, they all did and tons of wrongs and unforgivable blunders. The law is there to follow but UMNO especially, is guilty of not following the regulations and even cut corners to do things as it likes. This is where every law-abiding people must speak out and tell the useless regime we have enough of its nonsense and we want it out. 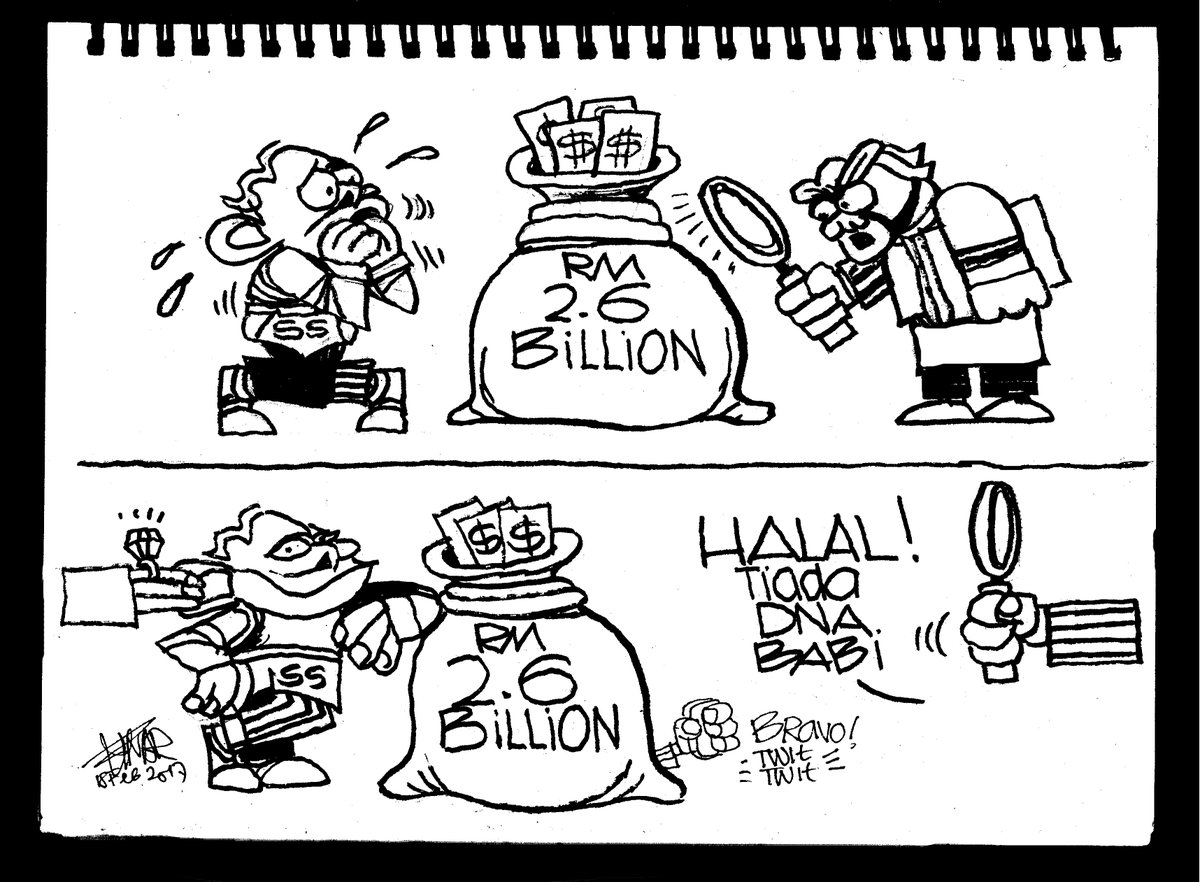 "Previously, there was a leader who said that even a mad Arab would not give such a colossal sum. But the presence of King Salman is sufficient to prove Najib was telling the truth that the RM2.6 billion was a donation from the Saudi royal family,academic Hanafiah Harun told Umno Online.

Seriously,I dont know why this 'kangkong macai' is so happy with the King Salman's visit? He didn't say, PM is not involved in 1MDB.The prove is US's DOJ...

Najib,by claiming the 20 sen hike - or 10 percent compared to the January price - is not as much as the 50 percent hike in Saudi Arabia, the prime minister showed that his "head is in the clouds" said MP Raja Kamarul Bahrin Shah Raja Ahmad.

"Najib appears to be like a school kid showing off his rich family friend in the kampung," he said in a statement.

"Does he realise that the Saudis are so rich that most of them can afford to own American-made cars with more than 4,000 cc engines?

"They don't pay income tax or taxes on their cars like we do and their wages are far higher than here, where we cannot even properly enforce minimum wage," he added in a statement.

Najib yesterday defended the recent fuel price hike to RM2.20 for a litre of RON95, by comparing it to the 50 percent hike in fuel prices in Saudi Arabi.

However, he did not mention that at RM1.07 per litre (90 riyal), RON95 in Saudi Arabia costs less than half of the price in Malaysia.- mk